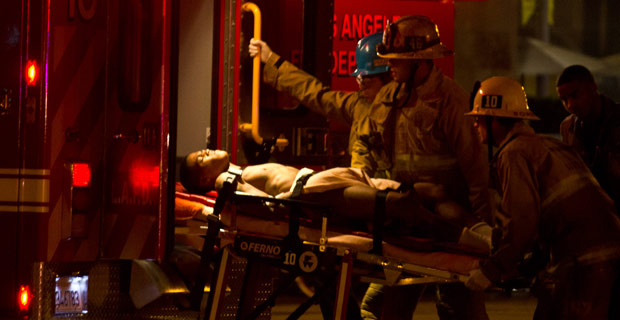 [This story has been updated. See below for details.]

The Los Angeles Police Department has detained two suspects following a shooting that injured four people near the Ronald Tutor Campus Center at approximately 11:45 p.m. on Wednesday, according to campus authorities. A gunshot victim is loaded into an ambulance at the scene of Wednesday’s shooting. Four people sustained gunshot wounds and two suspects were later detained. Joseph Chen | Daily Trojan

Only one of the four victims is in critical condition and as of approximately 2 a.m. was undergoing surgery at California Hospital Medical Center, according to LAPD. Three others were injured and immediately transported to California Hospital as well. Neither the suspects, whom LAPD identified as approximately 19-years-old, nor the victims were affiliated with USC.Classes across the university are scheduled to continue as normal Thursday.

The shooting occurred about 100 yards from a Halloween costume party, “Freak or Greek,” which was held in the Ronald Tutor Campus Center’s ballroom. The event, which began at 9 p.m., was hosted by a USC student organization and LA Hype, a night life and entertainment group. The party drew a crowd of about 1,500, according to the Dept. of Public Safety.

“We were waiting outside to get into the party, and we were waiting for a while — maybe 20 or 30 minutes,” said Olivia Gordon, a freshman majoring in psychology. “And all of the sudden, as soon as people started going inside, there were multiple gunshots and everyone who was in line for the party ducked and we all ran.”

A confrontation occurred between two unidentified males, which led one to shoot the other, inadvertently injuring three others in the process, according to DPS Capt. David Carlisle. The intended victim was shot three to four times in the torso, according to LAPD Cmdr. Bob Green. The other three victims did not sustain life-threatening injuries.

“I heard three gunshots … there might have been more than that,” said Christina Nour, a freshman majoring in civil engineering building science. “Then I ducked. It didn’t feel real. It felt like it was a movie because I really haven’t experienced anything like this before. I was running as fast as I can, trying to make sure I didn’t get trampled or tripped. I just ran as fast as I could, as far as I could.”

Michael Jackson, vice president for student affairs, released a statement on the university’s website, saying DPS had been monitoring the area near the party. He also noted the importance of ensuring safety.

“This incident reminds us that we must look out for ourselves and be particularly vigilant about the personal safety of friends and guests at our social events,” Jackson said.

After the shooting, officers at the scene identified the shooter as well as an unidentified male who was fleeing the scene with him. Officers followed the two to Parking Lot 6 and detained them; they also retrieved the handgun used in the shooting from the ground at the lot.

DPS issued a Trojan Alert at 12:02 a.m. on Thursday, asking students to take “shelter in place and avoid opening doors for unknown persons.” DPS and LAPD also immediately cordoned off the area near the shooting, including from Bovard Auditorium to Mudd Hall and from the Campus Center to the eastern edge of Hahn Plaza. The entire University Park Campus was locked down soon after.

Despite the lockdown, LAPD said the event in the Campus Center continued even as the shooting and its aftermath unfolded outside.

At approximately 2 a.m., DPS and LAPD opened the campus to students, faculty and staff with USC identification. The entire campus was reopened at 4:52 a.m.

Asst. DPS Chief John Thomas said that the incident was not indicative of the overall level of safety in and around USC.

“[USC has] a great partnership with the Los Angeles Police Department. We are one of the safest campuses in the country — we make sure that we have the necessary resources at the event, we do necessary planning and unfortunately [the shooting] happened outside,” he said. “These are individuals that unfortunately came here and decided to disrupt what otherwise would have been a very peaceful event, like all of our events on campus.”

Eugene Hall, Geno’s father, told the Times that his son was recovering from a three-hour surgery in the intensive care unit of California Hospital Medical Center. The younger Hall sustained bullet wounds to the left thigh, back of leg, buttocks and arm, according to his father.

“The doc says he’ll pull through but they’re keeping him up there,” Eugene Hall told the Times.

Geno Hall was the intended victim of the shooting that occurred outside the Ronald Tutor Campus Center late Wednesday night. Three others were also admitted to California Hospital with minor injuries. None of the victims or suspects were affiliated with the university, according to the Los Angeles Police Department.

LAPD officials said they expect the other three victims to make a full recovery.

Nikias wrote that the individuals involved in the shooting were not affiliated with the university. USC’s policy allows student parties to be open to USC students and students from other colleges with a college ID.

Nikias did, however, say that the university will review this policy in light of Wednesday’s incidents.

“We are now carefully assessing and reviewing all of the university’s policies regarding visitors and events held on campus,” he wrote.

He continued to say that USC is still a safe campus, calling the risk of on-campus crimes like the shooting “very low.”

“I want to personally assure you that the university mobilized all its resources in responding to this incident, and worked closely with Los Angeles Police Department in ensuring our students’ safety,” Nikias wrote.

“All of us have been shaken by serious incidents this year,” Nikias wrote. “Despite these events, or indeed because of them, we must continue to support each other as members of the Trojan Family.”