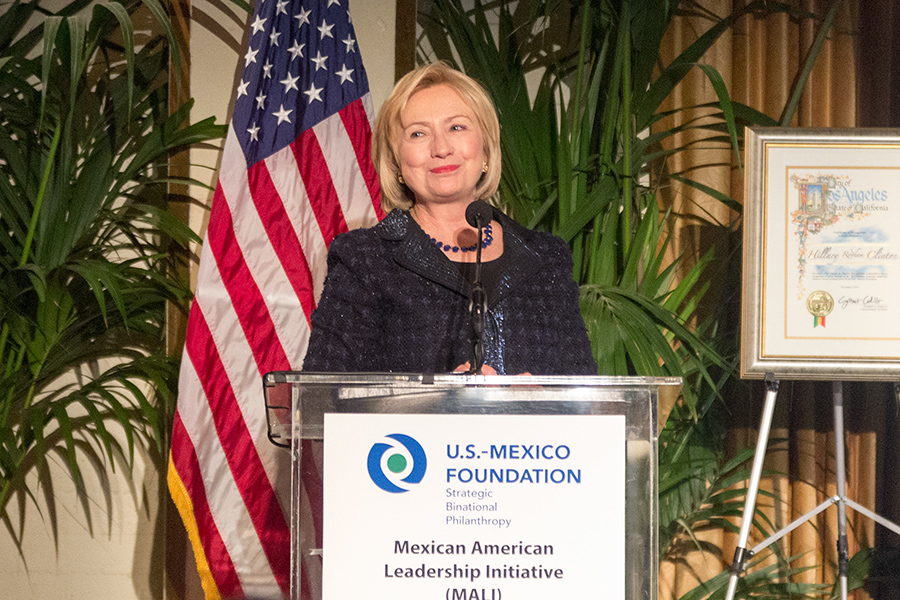 The U.S.-Mexico Foundation’s Mexican American Leadership Initiative honored former Senator and Secretary of State Hillary Rodham Clinton with their Hermandad award, which honors someone who has worked to strengthen relations between the United States and Mexico, Saturday morning at USC’s Town and Gown Ballroom. “From time to time on the horizon of American history, there appears a leader whose depth of understanding, whose proven experience and whose untiring dedication makes that leader precisely the right person for the time,” former Secretary of Housing and Urban Development Henry G. Cisneros said when introducing Clinton. “Such a person is Senator, first lady and Secretary of State Hillary Clinton, and such a time is now.”

This was the third annual award ceremony for MALI, an initiative Clinton said she had a small role in helping to launch as secretary of state.

After opening remarks by the event co-chairs, a short video on what the U.S-Mexico Foundation does and a performance by Latin Grammy-nominated band Trio Ellas, Clinton delivered the main address of the evening, during which she discussed her relationship with the Latino-American community and emphasized the power of minorities within the United States.

“The strength of the United States, by having this broad diaspora of people from literally around the world, struck me as secretary as one of our greatest assets that we are undervaluing,” Clinton said.

The speech also became politically charged at some parts as Clinton touched on controversial issues. For instance, Clinton discussed the importance of embracing immigrants in the United States.

“Part of the obvious argument for immigration reform is that we are a country of immigrants and we should be celebrating that rather than fearing it,” she said.

Speculation of a 2016 presidential run for Clinton was also rife among attendees.

“I’m always so impressed with her,” Sen. Barbara Boxer (D-Calif.) told the Daily Trojan. “I think that [Hillary Clinton] is a woman with experience that no one else has: first lady of a state, first lady of a country, U.S. senator where I served with her and she was a great leader, and I believe our next president.”

After Clinton’s speech, brunch was served and Monica Lozano, publisher and CEO of La Opinión, moderated a discussion between Cisneros and former Secretary of Commerce Carlos Gutierrez on Mexican-American relations.

USC, which Cisneros referred to as a “lifelong friend of the American-Latino community,” was also recognized for its contributions to Hispanic-American relationships. Attention was specifically brought to the Neighborhood Academic Initiative, a program that prepares local low-income middle school and high school students for college.

“I’ve been to many, probably hundreds of universities across the country and I’ve never seen anything like [the NAI],” Cisneros said. “It’s the best example for a university engaging with its minority community in the neighborhoods immediately surrounding it … It’s truly amazing; I commend it. [Clinton] recommended I tell you about it.”

Steve Kay, dean of the Dornsife College of Letters, Arts and Sciences, pointed out that USC is also involved in researching immigration issues through the Center for the Study of Immigrant Integration.

“When we talk about being a leader of the Pacific Rim, we’re not only looking west, we’re also looking south,” Kay told the Daily Trojan. “And, to really be a leader in the Pacific Rim is to embrace binational and international relationships with Mexico and Latin America.”

Lozano, who is also a USC trustee, pointed out three things USC is doing to build relationships with the Latino community: working with neighborhood schools and making sure people have access to USC, recruiting students from USC’s office in Mexico and having academically strong programs that focus on the U.S.-Mexico relationship.

“USC is so well positioned in that it has embraced its relationship to Los Angeles and the fact that Latinos in Los Angeles are clearly the majority and growing … I think it is taking advantage of that position in ways that no other university is,” Lozano told the Daily Trojan.