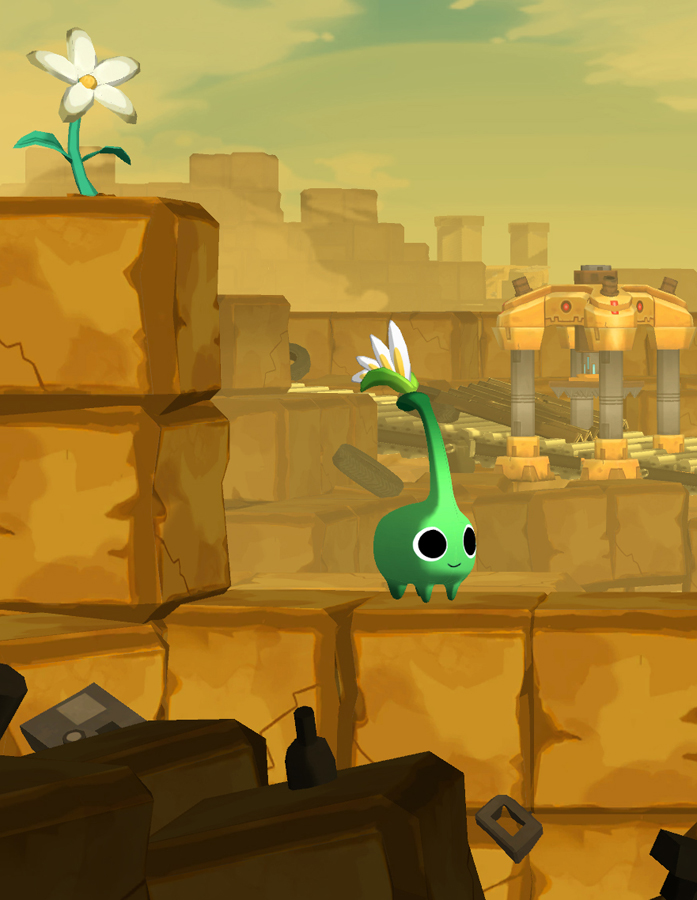 In a dystopian future where robots overwhelm mankind, technology is left to rule Earth as it pleases. But a small fragment of hope lies in the Earth’s greatest gift: nature. Underneath a junkyard of stacked dirt and metallic cubicle waste hides the hero of the story. Interestingly, the hero is not a big and powerful human or animal, but a lone, small seedling named Sprout. Using the powers of nature, players control Sprout in order to defeat the robotic menace that has taken over the world. Against unspeakable danger and mighty metal foes, Sprout begins a lively journey toward the Tree of Life in order to restore the world to its natural state. No doubt, sprout · Bloom players travel through levels as a small green sprout. This game will be available to test at Demo Day on May 14th. – Photos courtesy of Jordan Klein

Bloom is a 2.5D adventure platform game led by a large group of hardworking Trojans. So far, the team has released a demo on its website that contains two levels and a Boss Battle. Players engage in a cel-shaded cartoon world through Sprout, who has the ability to shift its powers depending on the flowers that it comes across. Gameplay is very simple; players control Sprout using the WASD keys, the spacebar and a mouse along two axes of movement: up, down, left and right. While navigating Sprout toward an unknown destination, players can watch as the background unfolds a story illustrating the sheer might of machines. Though the playable demo on the iPad requires more work, the Bloom team is working hard to perfect its demonstrations in time for the Game Developers Convention in San Francisco in March.

Developed by a team of nearly sixty people, Bloom shows promise with eye catching visuals, and an expansive team of talented students. Understandably, a team as large as this one is prone to run into some kind of difficulty. Initially the team faced an array of problems from an inexperienced art team to organizational difficulties. At the same time, scheduling and communication is still a rampant problem which was exemplified by yesterday’s rushed interview. Both are minor issues that could be solved very easily as the team has previously fixed bigger problems in the past.

“We had two major hits this year,” said networking lead Christopher Barakian. “Two of our previous leads left.” The abrupt departure of important members forced the remaining students to step up and fill in to keep the project running. Most of the positions are filled by those who have chosen to take on the job even if the position is different than what they’re used to. This allows for other members to easily pick up where others have left off, creating an efficient team dynamic.
At the same time, the team increased its network of talented individuals through outreach to students at other schools. As it outsourced certain jobs to different people, the team smoothed out its rough patches. Ultimately, the group formed a team to collaborate on possibly the biggest student game of the year.

“It’s amazing to have all these people come together to work on one big project,” said lead producer Jordan Klein. “It’s a great learning experience.” Jordan said the average size of a development team is only 25 people. But with a team as large as Bloom’s, it isn’t easy for morale and dedication to stay high. Fortunately, Bloom’s team is diverse and dedicated. The team dynamic parallels Sprout itself in that the different talents of each individual contribute to the overall strength of the whole, allowing the team to overcome difficult hurdles.

“We even have an amazing musical score, composed by Max Loh, a graduate of USC’s “Scoring for Motion Pictures and Television” program,” said lead engineer Peter Turner. Not only does this student project have the expertise and talent of sixty people, but they also have support in the form of platform kits from Sony.

USC currently ranks as the nation’s top school in computer science games, so it’s not surprising to see Bloom’s level of quality and originality. Indeed, the game has come a long way after only a few months of production. The USC Advanced Games program itself is a yearlong period in which students of various majors gather to create digital games.
For aspiring students interested in creating their very own game, pitches for next year’s projects are due in a couple of months and this team encourages students of all majors to voice their opinions.

“Always hold yourself to higher standards,” says game director Khaled Abdel Rahman. The team’s relentless hard work and promotion has led them from a scattered collection of individuals with a single artistic goal to a development team who may see their vision come to fruition. But for Bloom to be an even bigger success in the future, it should focus on improving its internal organization. The game shows promise but could benefit more from improved communication and scheduling abilities.

Supporters can continue to support future USC student projects by attending Demo Day on May 14 to playtest Bloom as well as other promising student-produced games.