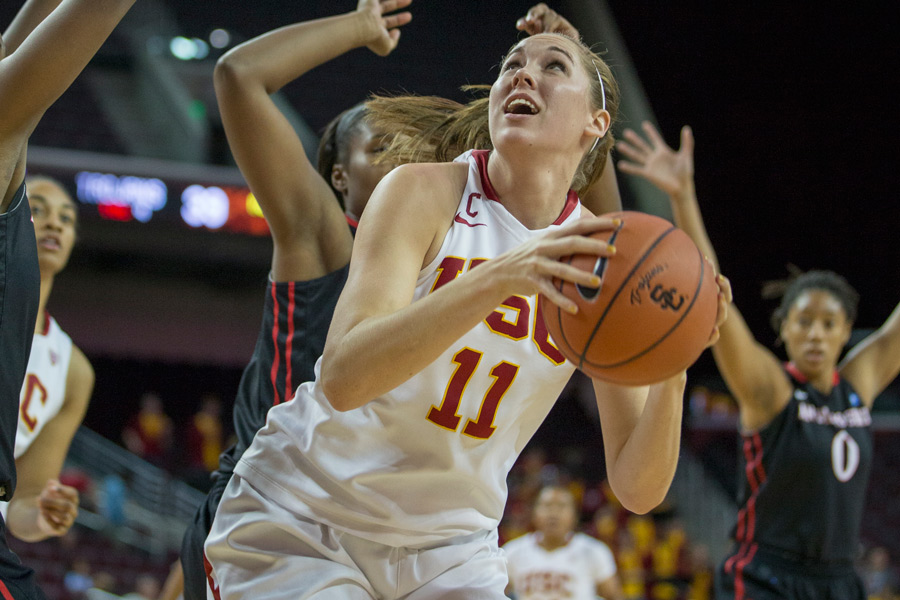 After running over crosstown rival UCLA to complete a season sweep, the Women of Troy look to continue to build momentum as they get back on the road this weekend to take on the Oregon schools. Duck hunt · Senior forward Cassie Harberts knows that Oregon did not play its best game at the Galen Center on Jan. 19, and thinks the Ducks will provide a big challenge tonight. Harberts is averaging 16.4 points per game. – Ralf Cheung | Daily Trojan

USC (15-9, 8-4 Pac-12) will first travel to Eugene, Ore. to take on the Ducks tonight before heading to Corvallis, Ore. to face off against the Beavers on Sunday.

The Women of Troy prevailed against both squads in earlier matches at the Galen Center this season and will be looking to sweep another pair of Pac-12 schools. USC defeated Oregon State 81-60 and Oregon 109-85 in late January.

The win against Oregon marked USC’s season-high for points scored in a game.

“When they were here, they didn’t shoot too well so we are going to go up there with the mentality that they are going to shoot really well on their home court,” said senior forward Cassie Harberts. “We have to rebound the ball, play defense and play our game.”

Harberts heads into the weekend leading the team in scoring, averaging 16.4 points per game, while junior guard Ariya Crook is scoring 15.7 points a game.

USC head coach Cynthia Cooper-Dyke has been an advocate of intensity on the defensive side of the ball, but the team has also been working on improving its offense.

“One of things we have been focusing [on] in practice has been sharing the ball, the correct spacing and timing offensively,” Cooper-Dyke said.

The Women of Troy are looking to get back on a roll after they snapped their three-game losing streak last Saturday in a 68-54 win over the Bruins.

“It was very important [for us] before we got out on the road to get back up on that winning horse,” Cooper-Dyke said.

The team still remains in the top tier of the conference, as it has throughout the conference schedule. No. 6 Stanford, No. 22 California and Arizona State are the only three teams that stand ahead of USC in the conference.

Even with their success this year both inside and outside the Pac-12, the Women of Troy have been unable to crack the national top 25 as they enter their 15th week of competition, though they have received votes in the earlier weeks.

In their Friday tilt with the Beavers, the Women of Troy should expect a confident Oregon State team that is coming off three wins in a row against Arizona, Colorado and Utah.

Oregon’s Chrishae Rowe has asserted her dominance as the squad’s leading scorer, averaging an impressive 23 points per game. The tandem of Rowe and Jillian Alleyne, who is second on the team in scoring with 21.1 points per game, could prove to be a challenge for USC’s defense. Alleyne also brings down a team-high 15.3 rebounds per game, to average a double-double.

This road trip is especially important for the Women of Troy, as the following week they will return home to the Galen Center to host two of the Pac-12’s best teams in Stanford and the nationally ranked Cal Golden Bears. But USC’s head coach is reluctant to look too far into the future.

“We are going to continue to take it game by game,” Cooper-Dyke said.