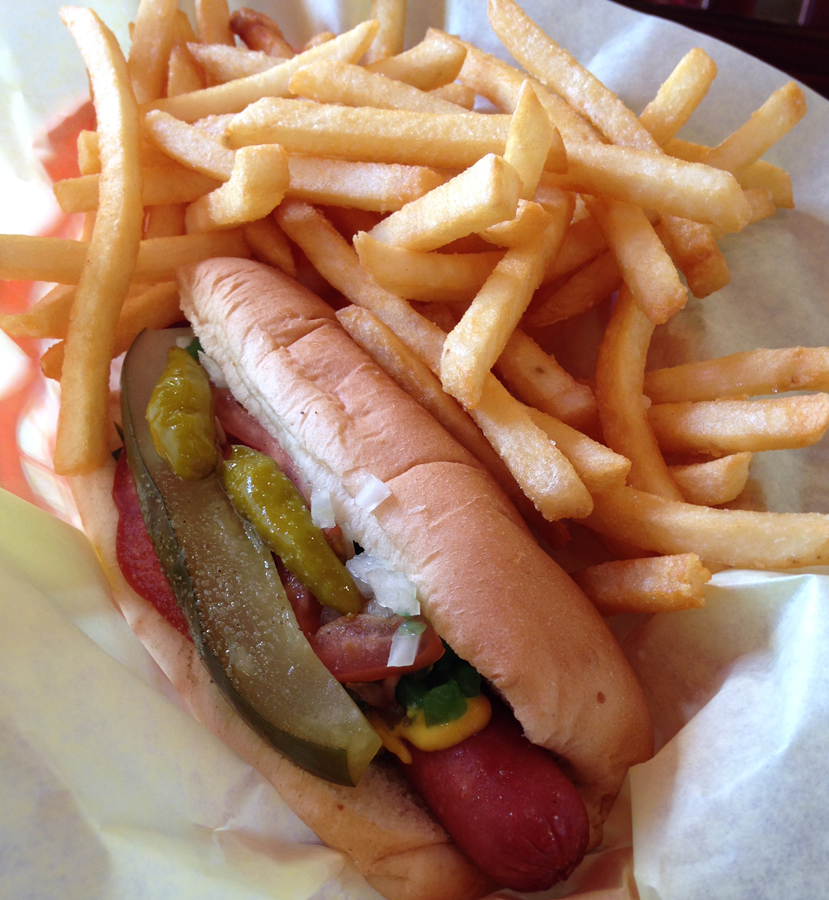 Regional American cuisine seems to be di rigueur as of late, with the popularity of Midwest and Southern-style barbecue eateries such as Horse Thief BBQ and Bludso’s Bar-&-Que, and the opening of Whiz, an upscale Philly cheesesteak-pub concept in Koreatown, to serve as examples. The latest entry into the L.A. food scene isn’t so much a new take on these regional foods, but rather the transplantation of a tried-and-true recipe: Chicago’s very own Budacki’s Drive In, which comes to Los Angeles in the form of Budacki’s Hot Dog. Los Angeles’ version of the 52-year-old Chicago hot dog stand is currently in soft open in new digs in the old Pizza Rustica space in Exposition Park. The name Budacki’s might ring a bell to Chicagoans or fans of Anthony Bourdain. In 2012, the controversial chef and star of CNN’s Anthony Bourdain: Parts Unknown once threatened via Twitter to cancel his visit to Budacki’s Drive-In in Chicago as a result of the restaurant publicly announcing his arrival with a $1 hot dog special. Of course, Bourdain eventually made it to the North Side eatery for a “stealth shoot.” But, thanks to the efforts of restaurateur Jin Ra, it’s the drive-in’s West Coast offshoot that’s been on the radar of curious passersby and hungry museum patrons as of late.

Upon walking into Budacki’s Hot Dog, it becomes clear the restaurant is playing to the Trojan crowd: Workers are outfitted in full cardinal uniforms and USC hats, and the restaurant’s space is completely decked out in cardinal and gold — or ketchup and mustard, your pick. Save for its puzzling choice of polished cherry wood furniture, it has every making of a local hangout for catching Trojan sporting events on one of the restaurant’s two flat-screen TVs. Those watching the USC men’s basketball team this season will be disappointed to find that Budacki’s doesn’t serve hard alcohol. Budacki’s does, however, serve a handful of domestic and imported beers, which is excellent given that they pair well with the food.

The Chicago Dog is actually a very finicky hot dog. It begins with the frankfurter, which isn’t the ideal variety with natural casing, but is still a cut above the average Hebrew National or Ballpark variety nonetheless. This hot dog is topped with veggie toppings, including diced onions, tomatoes, pickles and sport peppers. The entire dog is then sprinkled with celery salt and served on a bun with a pile of French fries. At first bite, the Chicago Dog just makes sense: The salty, rich frank is undercut with a clean, acidic bite from the pickle and a pleasant amount of heat from the sport peppers. Chicago dog purists might be dissuaded by the absence of a poppy seed bun, and Budacki’s bun seems almost like an afterthought when considering the other ingredients.

Another Chicago favorite that made it to the West Coast is the Italian beef sandwich — thinly slivered, slow-roasted sirloin steeped in a gravy infused with Italian spices is piled onto a roll and topped with spicy giardiniera, or pickled carrots and peppers. Budacki’s version is served on ethereally soft bread, which sounds great in theory. In practice, however, the gravy and juices of the meat overwhelm the bread. Sure enough, as soon as the sandwich felt the slightest bit of pressure from the outside, the bread was rendered in twain at the hinge. This slip-up was at least partially rectified by how solid the sandwich actually tasted. The beefiness did, however, overwhelm the slightly underrepresented vinegary twang of the giardiniera — Budacki’s would do well to pile on more of the pickled vegetables and peppers to really allow both flavors to play against one another.

Which brings everyone to the most important point: Spicy, greasy foods pair incredibly well with beer. It’s as simple a fact as there is in food, and Budacki’s has several beers by the bottle, including Fat Tire and Heineken.

The most important factors in driving Budacki’s business, however, will boil down to two things: location and price. The aforementioned combination of a Chicago hot dog and Italian beef sandwich, with a helping of very crunchy and delicious French fries and a soda, costs exactly $8. It’s a godsend in a neighborhood that seems to offer everything except unpretentious, down-home American fast food (feel free to cast BUILT Burger and Pizza Studio a dirty look).

Budacki’s caters to a “turnt-down” crowd that could use a good old-fashioned hot dog, sandwich or burger and a beer with ESPN on the tube. And with the dearth of solid hangout options for those types in the immediate proximity of campus, Budacki’s Hot Dog in Exposition Park might just carve out a following for itself — no Anthony Bourdain-fueled publicity stunt required.

Predicting the closest race in years
Scroll to top