Predicting the closest race in years 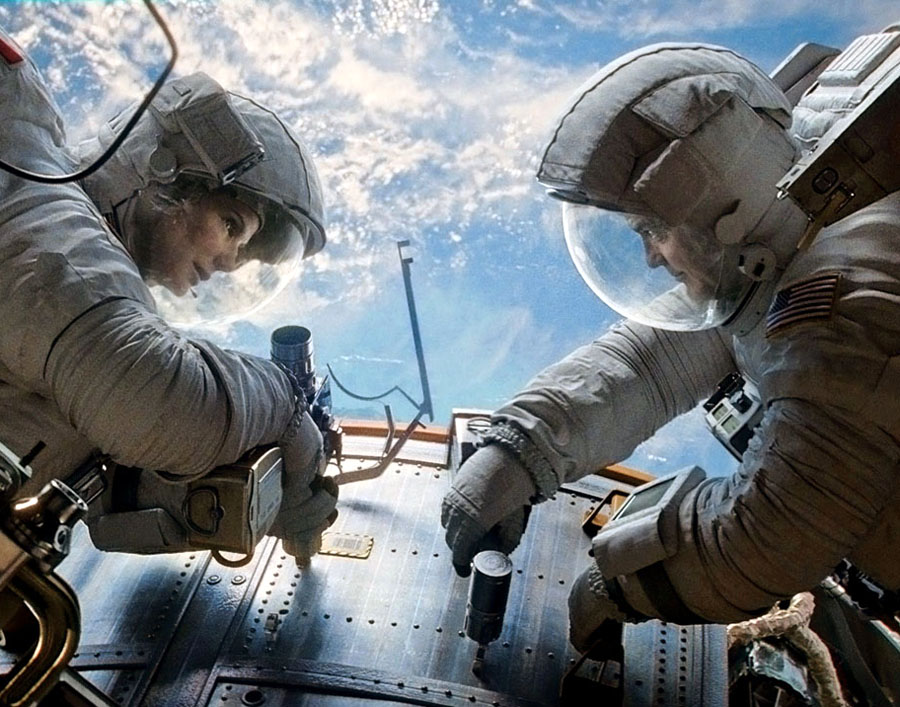 With the 86th Academy Awards only three days away, the Best Picture race has seemingly narrowed to a three-way duel between Alfonso Cuarón’s immersive sci-fi spectacle Gravity, Steve McQueen’s soul-searing historical drama 12 Years A Slave and David O. Russell’s flashy crime caper American Hustle. No matter which film ultimately triumphs, two things are already certain: 1) Despite a slow start, 2013 was a pretty fantastic year at the movies and 2) This Sunday’s ceremony — hosted by Ellen DeGeneres as a calming antidote to Seth MacFarlane’s mammary-centric antics last year — will be one of the most unpredictable in recent memory. Gravity of the situation · Alfonso Cuarón’s Gravity, starring Academy Award winners Sandra Bullock and George Clooney as a pair of astronauts stranded in space, has been nominated for a total of 10 Oscars, including Best Visual Effects, Best Actress and Best Picture. – Photo courtesy of Warner Bros. Pictures

This dead heat has been in the forecast for a while now. Last month, the Directors Guild of America honored Cuarón with its top prize — The DGA Award for Outstanding Directorial Achievement in a Feature Film — while the powerhouse cast of American Hustle dominated the Screen Actors Guild Awards. The Producers Guild of America — usually the most reliable bellwether for the Oscars — just couldn’t choose between 12 Years A Slave and Gravity, leading to the first tie in the show’s 25-year history. The Golden Globes, meanwhile, clumsily attempted to spread the love by awarding American Hustle Best Comedy or Musical, declaring Cuarón Best Director and bestowing 12 Years A Slave with its one and only award of the night: Best Drama.

So who’s actually going home with the little gold guy? Let’s consider each movie’s individual merits, along with some possible drawbacks.

Gravity is a nerve-rattling, eye-popping marvel that never allows its bleeding-edge special effects to outshine its two human stars. George Clooney and Sandra Bullock are both at their finest as two astronauts navigating oblivion, but Bullock’s character in particular quickly becomes the heart and soul of the film, transforming a relatively straightforward lost-in-space thriller into a powerful metaphor for the grieving process. It’s entirely possible, however, that some Academy members might only see the film as a technical showcase — it’s definitely a lock for Best Visual Effects. If McQueen and his crew end up winning Best Picture, it’s a good bet that Cuarón will score Best Director as a hefty consolation prize.

12 Years A Slave, the presumed favorite, is without a doubt the most unflinching examination of human bondage ever put to film. Unlike the gleeful blood-and-irony revisionism of Django Unchained, McQueen’s film offers no easy catharsis for the inhuman evil that is slavery. Instead, it dives headlong into the casual brutality of our nation’s original sin, plucking the stitches from old wounds and testing its audience’s tolerance for scenes of abject cruelty and debasement. Even though the movie is ultimately a tribute to the resilience of the human spirit, its grueling bouts of violence — especially that agonizing lynching scene — could alienate more sensitive voters.

Then there’s American Hustle, a haphazard epic of pros and cons that’s deeply indebted to early Scorsese and the small army of costume designers and stylists who created the film’s over-the-top hairstyles, wardrobes and the Byzantine wonder that is Christian Bale’s faux comb-over. Russell’s film, his third straight critical and commercial hit in what many are calling a creative renaissance, has a zippy, delirious energy all its own. But there’s been a backlash brewing ever since it received 10 Academy Award nominations, tying Gravity and outpacing 12 Years A Slave.

To be perfectly honest, American Hustle doesn’t belong in the Best Picture race. That doesn’t mean it’s a bad movie. It’s a fun, light-hearted romp with a talented cast that’s clearly having a ball trying on outlandish costumes while spouting over-the-top dialogue in often-undeterminable accents. The scene in which Jennifer Lawrence’s tempestuous New Jersey housewife character starts a kitchen fire because she can’t understand how to operate her new “science oven” (i.e. microwave) was one of the funniest moments in theaters last year, second only to the Quaalude overdose scene in The Wolf of Wall Street. But at the end of the day, Russell’s narrative is just too rambling and convoluted for its own good. That said, if 12 Years A Slave and Gravity end up splitting the vote, this scrappy underdog with the loud wardrobe and the impeccable perm could pull off a come-from-behind victory, thus joining the ignominious ranks of past “undeserving” Oscar winners such as Shakespeare in Love and Dances With Wolves.

The acting categories are a bit easier to predict. Cate Blanchett’s mesmerizing turn as a gloriously unhinged ex-trophy wife in Woody Allen’s Blue Jasmine makes her winning Best Actress the safest bet of the night. Though 12 Years A Slave’s Chiwetel Ejiofor and Nebraska’s Bruce Dern were once considered the two presumptive frontrunners for Best Actor, Dallas Buyers Club star Matthew McConaughey seems to have the most momentum right now. The critical acclaim surrounding his portrayal of a homophobic AIDS patient-turned-pharmaceutical smuggler is only the latest triumph in the actor’s post-Lincoln Lawyer career resurgence, a three-year winning streak that’s evidently continuing on the small screen with HBO’s new procedural, True Detective.

Best Supporting Actor is often the villain’s corner -— past winners include Heath Ledger for The Dark Knight and Javier Bardem for No Country for Old Men — or a platform for honoring older actors who are still taking chances. This year, however, the category likely belongs to 30 Seconds to Mars frontman Jared Leto. The musician/actor, who’s appeared in Darren Aronofsky’s Requiem for a Dream and the underrated Lord of War, gives a revelatory performance in Dallas Buyers Club as Rayon, a transgender AIDS sufferer whose mordant sense of humor masks a crippling drug habit. Like his co-star McConaughey, the already slight Leto dropped an alarming amount of weight to realistically portray someone on death’s door. Yet the physical transformation is only part of what makes Rayon such a compelling character. Leto brings a certain world-weary charm to the role, infusing every line of dialogue with a sad, knowing wisdom that transcends stereotyping.

Best Supporting Actress will inevitably come down to Jennifer Lawrence in American Hustle and relative newcomer Lupita Nyong’o, who plays the demanding part of Patsey in 12 Years A Slave. In a film chock full of danger and dire circumstances, Patsey has it worse than anyone. She’s a field slave caught in the middle of a domestic dispute between sadistic plantation owner Edwin Epps (Best Supporting Actor nominee Michael Fassbender) and his equally nasty wife, played with icy furor by Sarah Paulson from FX’s American Horror Story. Epps wants to use Patsey as his sexual plaything, while the missus sees the hardworking cotton picker as a threat and plots to have her beaten to death in order to regain her husband’s twisted affections. The scene in which Patsey begs Solomon Northup (Ejiofor) to help her commit suicide is arguably the most heartbreaking sequence in the movie, and in a film as harrowing as 12 Years A Slave, that’s really saying something. Besides, as enjoyable as Lawrence’s performance in American Hustle is, the Hunger Games star won an Oscar just last year for Silver Linings Playbook. Now it’s Nyong’o’s turn.

The Academy Awards have always been Hollywood’s biggest night and an enduring institution of pop culture, even during times when the contenders were average and the outcomes were obvious. This year, however, with so many phenomenal films in contention and so many nail-biting races to follow, there’s really no excuse not to tune in. And if your own predictions don’t turn out so well, take solace in the wisdom of former perennial Oscar host Bob Hope: “Personally, I never drink on Oscar nights, as it interferes with my suffering.”