Women of Troy gear up for season opener 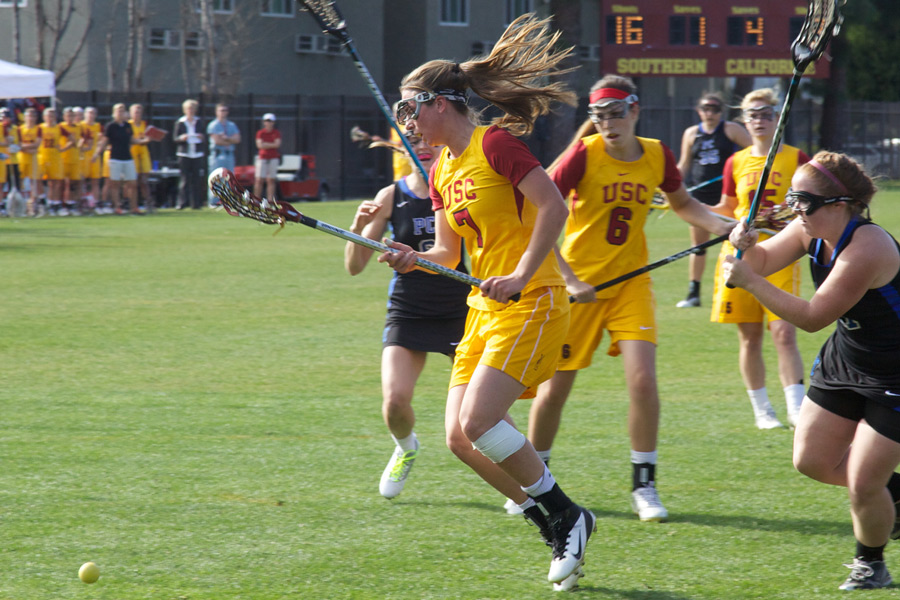 The USC women’s lacrosse team enters its second campaign of Division I competition today, taking on Marist at McAlister Field. The Women of Troy, who were tabbed third in the preseason Mountain Pacific Sports Federation poll, begin the year with high hopes after making a run to the MPSF conference tournament semifinals last season. Similar to USC, the Marist Red Foxes finished just under .500 a year ago and ended their season in the Metro Atlantic Athletic Conference finals, just short of an NCAA tournament bid. The Red Foxes lost their top scorer and goalie this season, however, and are now led now by attacker Kirsten Viscount, who scored 39 goals last season, and Jamie Romano, who added 32.

“They’re a great team, very physical, and prepared to battle,” USC head coach Lindsay Munday said. “We’re just excited for the challenge … and excited to come together as a team after the long preseason.”

Considering the Women of Troy’s jump in the preseason polls, USC could earn its first NCAA tournament bid by season’s end — an impressive feat for such a new program. Munday has made sure, however, to keep the team focused on handling its own business rather than getting caught up in others’ expectations.

“We don’t set goals for the season because we’re more focused on ourselves,” Munday said. “It’s a daily commitment, focusing every day on getting better and looking at yourself in the mirror asking if you’ve given everything you have to this team.”

This past season, USC relied heavily on its inaugural freshman class to carry the bulk of the load. Nearly every major contributor returns this year, and Munday sees leadership as one of the strengths of the Women of Troy.

“What’s great about this team is that we have 37 players that are leaders,” Munday said. “Whether you’re a freshman in your first collegiate game or have more experience, we want everybody to be a leader on this team.”

One of USC’s younger leaders is sophomore midfielder Amanda Johansen, who started all 18 games for USC a year ago, finishing with 41 goals and 16 assists. The Glen Head, N.Y. native said the Women of Troy have benefited from a greater number of players in training throughout the fall and preseason, increasing the intensity level in practice.

“This year we have a full army,” Johansen said. “Now we can go fast-pace in practice and have a lot more ways to attack. We’re a lot more talented team.”

With a full roster and a brand new season ahead of them, the Women of Troy are focused on starting off the season strong against Marist. Whether or not the USC women’s lacrosse team is ready to make its first NCAA tournament appearance, fans will just have to wait and see.

“Every team in Division I wants to [make the tournament], but we’re taking it one day at a time,” Johansen said. “It’s all about the journey.”

‘The Wind Rises’ soars above expectations