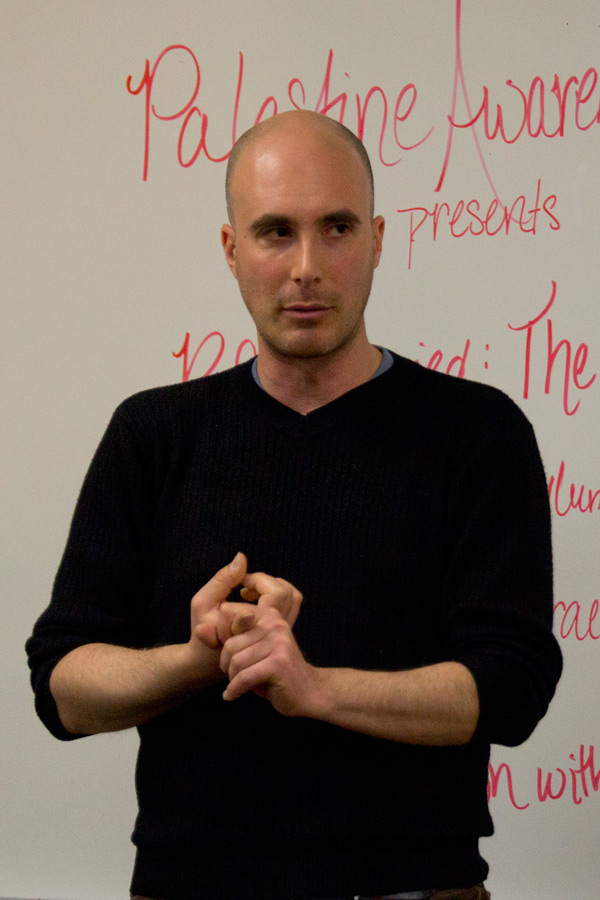 As part of Palestine Awareness Week, USC Students for Justice in Palestine invited documentarian David Sheen to discuss Israel’s treatment of Palestinian refugees and the impact of such policies on the region in the Social Sciences Building on Monday. There are approximately 55,000 African asylum seekers in Israel, coming mainly from the Sudan and Eritrea.

“If you compare Israel to the Western nations it wants to be compared to, you see it pales in number of Eritrean asylum seekers,” Sheen said.  “Israel leads the world in having the highest refugee rejection rate by far. Because, from the Israeli government’s perspective, none of these people are refugees.”

Sheen started the presentation by asking the audience to imagine the United States if Jews were forced to ride in separate buses and were not allowed to rent apartments. Then, the documentarian paralleled these hypothetical situations with the Israeli situation.

In January 2012, the Israeli government past an anti-filtration law meant to deter the arrival of further asylum seekers. By May 2012, there were anti-refugee riots on the street with shops and cars looted.

“You would think after this pogrom people would say ‘How did we get here?’” Sheen said. “But, in the week that followed, polls showed that people supported this.”

When South Sudan became a country, Israel began the first deportations, sending back refugees that were from the region. Sheen explained that some children who had been born in Israel died when they reached Sudan because of a lack of immunization and medical care. Refugees who are sent back receive money from Israel.

Without the right to work, African refugees in Israel need to take in “underground” jobs that pay low wages, leaving many refugees on the street.

Sheen also spoke about the racism in Israel that exists for both for Jewish and non-Jewish Africans.

“Jews of color also face racism,” Sheen said. “White supremacy is as much of a problem there as it is here. It is also the case where there is nativism. People who immigrated less recently believe they deserve more rights and privileges than people who immigrated more recently. But in addition to all this, you then have Jewish supremacy.”

Monday’s presentation was the first of Palestine Awareness Week, the annual event put on by USC SJP to raise awareness about Palestine and the occupation.

Following the event, many students in attendance expressed concern of the issue of refugees in Israel.

“I consider myself a person who tries to educate herself on world events, and it’s still pretty much the first I’ve heard about this issue,” said Nora Snyder, a senior majoring in international relations and Middle East studies. “The level of the crisis and the human rights violations that’s going on — it’s just mind-blowing that I haven’t heard about it and people here haven’t heard about it. It speaks to how this isn’t being covered by the media.”

Dan Rais, a junior majoring in the music industry, did not agree with all of Sheen’s point, but believed his work was important for increasing awareness.

“I am deeply embarrassed as a Jew of what Israel has become and what it is becoming,” Rais said. “I think the work of David Sheen, though I may not agree with certain aspects of his presentation, is very productive for raising awareness within student circles and Jewish circles and Palestinian circles about what is going on in Israel so that we can find solutions to the problems we are facing in      Israel-Palestine.”

Ifrah Sheikh, president of SJP, stressed the value of Palestine Awareness Week as a whole.

“The importance of Palestine Awareness Week on [the USC] campus is because it’s a very apathetic campus,”  Sheikh said. “In terms of activism, it falls short and this is a chance for us to really get out a narrative that is not spoken about on this campus. The week is a way to offer a lot of different experiences and insights into different aspects of the conflict and the occupation in a short time frame.”

Another main feature of Palestine Awareness Week is the mock apartheid wall and a lecture by UCI Professor of African-American Studies Sohail Daulatzai.

The wall, put up on the steps of the Von Kleinsmid Center, was borrowed from UCLA’s Students for Justice in Palestine, and it includes information about the Israeli-Palestinian conflict and its history. Professor’s Daulatzai’s lecture will take place on Thursday in the Science Lecture Hall.