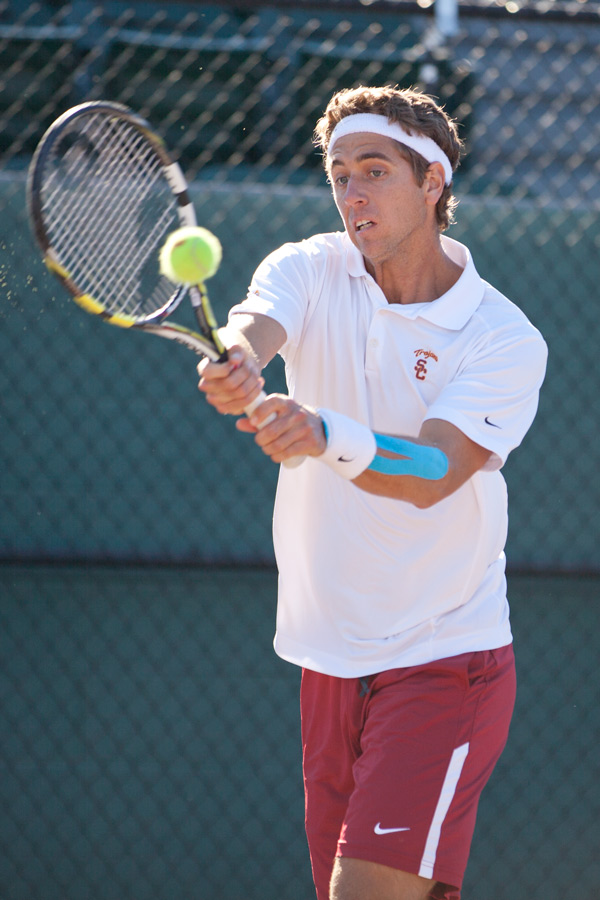 USC head coach Peter Smith was especially impressed with his team’s play against the Crimson Tide.

“I think when we played Alabama — in terms of effort and energy -— it was perfect,” Smith said.

Sarmiento racked up two wins at the two-spot, but Hanfmann did not fare as well. The German suffered an upset at the hands of Ole Miss’ Nik Scholtz and his match against Alabama’s Daniil Proskura was suspended after Hanfmann dropped the first set, 7-5.

Smith acknowledged that the lineup change was unsuccessful at the top spot, but said he did it in order to maintain his team’s balance.

“I feel like for whatever reason, Ray has played more at one and I just want to give Yannick his reps there,” Smith said. “I want to have the balance to be able to play anybody anywhere, and Yannick needs to play more matches there.”

Smith said that he plans to put Sarmiento back in the top singles slot against the 8-8 Aztecs today, where he will likely face SDSU’s Thorsten Bertsch.

The Aztecs are unranked and has no players ranked in singles or doubles, but Sarmiento insists the Trojans won’t overlook their opponents.

“Our coaching staff does a great job of pushing us to keep getting better,” Sarmiento said. “No matter who we play there’s always a challenge to better ourselves as individuals and as a team.”

Sarmiento is currently riding a seven-match win streak in singles and sits at a career-high No. 3 in the national rankings released March 11. He and Hanfmann have  won 10 of 11 doubles matches together this season.

Junior Roberto Quiroz has matched Sarmiento’s recent success in singles, having also won seven straight. The Ecuador native was recently named Pac-12 Player of the Week for the second time this season.

“[Quiroz is] just bringing it and it’s really great to see him having more balance in his game, having more maturity in himself,” Smith said. “He’s really just handling himself. He’s grown up a year in two months.”

Today’s match will be the Trojans’ last nonconference matchup of the regular season, as they head to Oregon and Washington this weekend to begin Pac-12 play.

Smith says today’s match provides the perfect opportunity  to get back into the swing of things after having a few days off after the road trip and to prepare for the upcoming stretch of conference games.

“I did want to give the guys a spring break, but I also wanted them to have a little bit of cold water on the face — second day back from spring break, let’s play San Diego State,” Smith said. “We’ve got to get ready for the Pac-12 season and that’s what San Diego State’s here for.”

San Diego State comes into today’s match following a 4-2 win over Denver in the San Diego Invite. It was one of just two wins over nationally ranked opponents for the Aztecs all season.

The Trojans will take on the Aztecs today at Marks Stadium at 2 p.m.