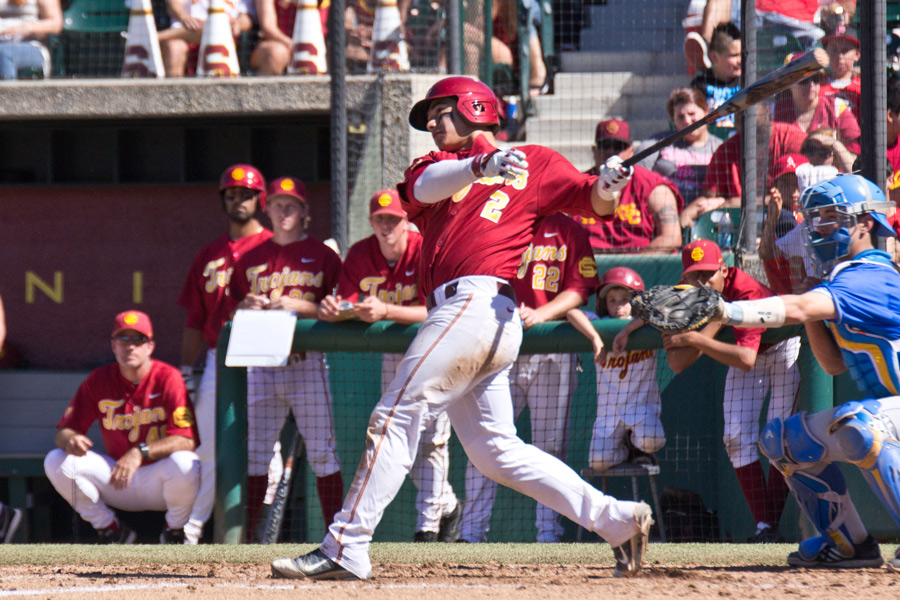 While the rest of the USC student body relaxed and rejuvenated over spring break, the Trojan baseball team traveled to Oregon and Stanford to start off the Pac-12 conference slate. USC took last weekend’s series against the Cardinal, winning twice in three games to close out its road trip. Catch a break · Freshman catcher/designated hitter Jeremy Martinez drove in the game-winning run against Stanford this weekend in a 10-inning effort. The newcomer is batting .284 for the Trojans this season. – Joseph Chen | Daily Trojan

USC head coach Dan Hubbs was impressed with his team’s ability to beat the Cardinal.

“I thought we came up with some timely hits that led us to win on Friday and Sunday,” Hubbs said. “On Friday, Wyatt Strahan pitched extremely well and our relievers Kyle Davis and Kyle Twomey delivered big time on Sunday. Throughout the series, we really improved in running up the pitching count so the Cardinals’ bullpen had to come in, who we were then able to score runs against.”

Sunday proved to be the series’ most exciting game as the Trojans worked back from a three-run deficit within the first two innings of the game and managed to clinch the win with three runs during the top of the 10th inning after tying the game in the eighth.

Despite the successful comeback against the Cardinal, Hubbs believes that the Trojans must play more consistently and strategically during the beginning of games tonight and in the future.

“We need to do a better job moving forward of not giving up too many runs early so we don’t have to play from behind all the time,” Hubbs said. “That being said, I thought the guys really fought hard even though they struggled a little offensively and defensively. For us to play poorly like that and still come away with a series win on the road is a big step in the right direction for our program.”

The Trojans will face the Loyola Marymount Lions for the second time this season tonight at George C. Page Stadium.

During the last matchup, the Trojans ended the Lions’ seven-game winning streak in a 6-1 victory at home thanks to pitching efforts by sophomore Brent Wheatley and the four relief pitchers, as well as clutch hitting by junior infielder Dante Flores and junior catcher Garrett Stubbs.

In the two weeks since that game, LMU has created another winning streak, going 6-1 in series against Portland, Long Beach State and San Diego.

Despite the Lions’ recent successes, Hubbs feels that the Trojans can once again end their hot streak, provided that they play to their potential.

“To beat LMU again we basically just need to play well, which means getting a good start in terms of pitching, playing good defense and getting the bat rolling,” Hubbs said. “If we play decently like we did against Stanford last weekend, we probably won’t win, so the guys really need to step it up tomorrow.”

The numbers suggest that the Trojans and Lions will be evenly matched tonight, given that USC’s ERA is 3.16 compared to LMU’s 3.96 while LMU holds the advantage in team batting average with a .285 over USC’s .266.

In terms of securing a victory, Hubbs feels that the Trojans must improve their hitting consistency, which has struggled over the past two weeks.

“We haven’t been swinging the bat that great lately, so now we have to concentrate on making hits when it counts and advancing runners,” Hubbs said. “I think the guys have lost a bit of their confidence in terms of hitting recently, but they just need to not panic at the plate and realize they don’t need to hit a big double but rather string together a bunch of little hits to make runs.”

Sophomore Brent Wheatley will make the start on the mound for the Trojans tonight against the Lions at Page Stadium in Los Angeles at 6 p.m.