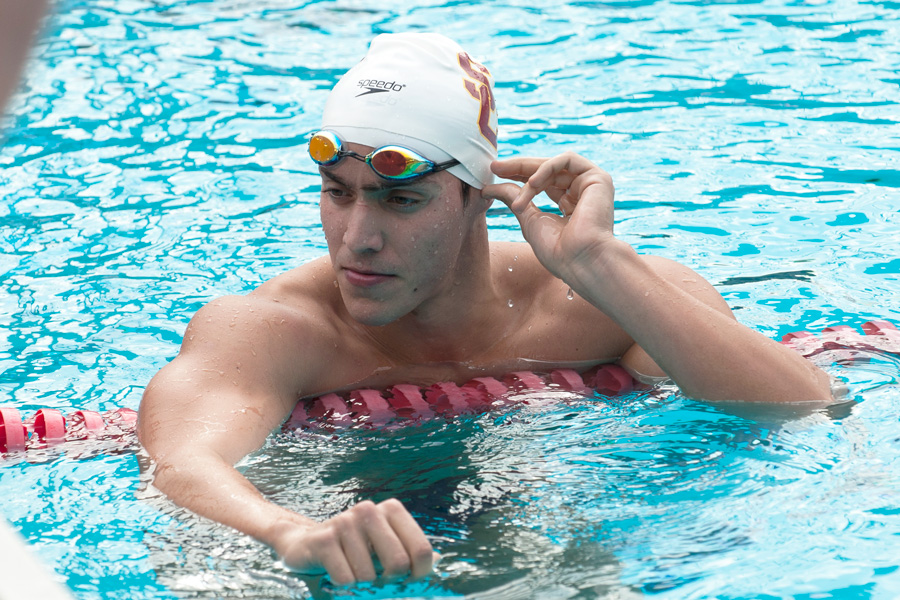 Notching two national titles, the Trojans placed eighth out of ten teams in the three-day NCAA Men’s Swimming and Diving Championships in Austin, Texas, on Saturday. Out with a bang · Senior swimmer Cristian Quintero won his first-ever NCAA title over the weekend, finishing first in the 500-yard free. The Venezuelan also finished second in the 200-yard free and third in the 100-yard free. – Will Ehart | Daily Trojan

“We were disappointed to finish eighth after taking fourth last year, but we came away with two national titles and a lot of experience for next year’s team to build upon,” head coach Dave Salo told USC Trojans. “Cristian has been a workhorse all season long and put up some great performances to lead the team.”

Though senior Cristian Quintero helped the Trojans land their fourth consecutive top-eight finish over the weekend, the team dropped four spots from its championship performance last year. USC entered the weekend ranked No. 4 in the nation, justifying Salo’s frustration with an eighth-place finish. The Trojans ended the meet with 182 points, beating Stanford and Indiana in the rankings. California won the overall team title with 468.5 points.

Despite a perhaps disappointing overall finish, the meet was not without its resounding triumphs. Quintero, freshmen Reed Malone and Dylan Carter and senior Dimitri Colupaev cruised through the 800-yard free relay, securing USC’s first NCAA title in the event since 2002 and its eighth in program history. The quartet’s 6:13.09 was just more than a half-second off USC’s all-time record.

Quintero, inarguably the team’s leader, didn’t leave his last NCAA championship without securing his own personal victories. The senior won his first career NCAA title in what would be his last 500y free race, and by a sizable margin. Quintero clocked in at 4:10.02, just .22 seconds off of USC’s record time in the race. Quintero sustained at least a one-second lead on his opponents, finishing with a time that made him the eighth-fastest swimmer ever in the race.

“I feel awesome,” Quintero told USC Trojans after his victory. “Since the beginning I felt really strong. I knew I had this. I had this in me all the time. I’m really proud of this. I’m really glad with my last performance. It was my last 500 free and I really wanted to make a good performance and I did.”

Quintero finished second in the 200y free and third in the 100y free and helped guide his relay team, comprising Colupaev, senior Jack Wagner and freshman Santo Condorelli, to sixth place in the 400y free.

The Caracas, Venezuela native is the first Trojan to win All-American honors in the 100y, 200y and 500y free events since USC’s Hungarian Olympian Bela Szabados accomplished the feat in 1999.

Other Trojans who got into the scoring mix include sophomore Ted Singley and junior Cary Wright, who went 26-27 in the 1650y free.