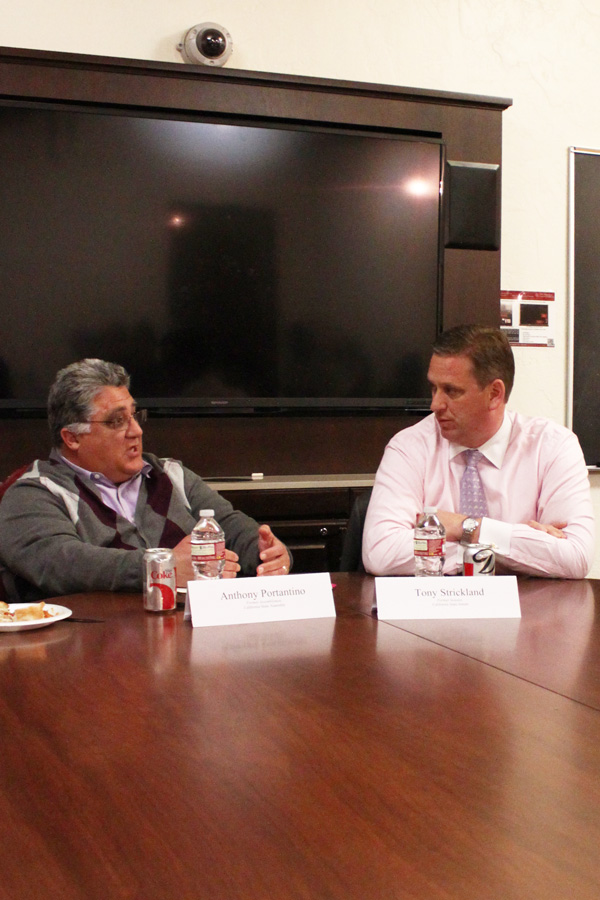 At the head of the table were USC’s two legislators in residence: former State Senator Tony Strickland and former Assemblyman Anthony Portantino. Portantino, who also teaches a class at USC, has been interacting with and mentoring students since he and Strickland began the program last year.

The conversation was moderated by Justin Bogda, director of the Political Student Assembly .

“We’re in a gridlock of party politics about whether or not climate change exists,” he said. “It’s very important for students to get involved and to be informed so that we can create a new generation of people that isn’t arguing about the existence of these problems, and instead debating how we are going to remove our consumption of finite resources that we don’t have forever.”

The conversation began with direct questions to Portantino and Strickland, the first of which concerned the science behind climate change. Portantino, who is hoping to teach a class at USC in the fall, said science is conclusive about the existence of warming.

Strickland, who is running for Congress, disputed the absolute nature of the science cited by climate activists, and countered Portantino’s humor with some of his own.

“When I was a kid it was global cooling — I got a little older and it’s called global warming, and now it’s called climate change,” he said. “The problem with that is scientists will be on both sides. There are a lot of scientists that say it’s a hoax.”

Though Portantino disagreed with Strickland, he was able to find common ground with Strickland on the need to carefully craft environmental regulations to avoid unnecessary damage to the economy.

Bogda then opened the conversation to questions from the students, who weren’t afraid to disagree with Strickland and Portantino about where the priorities should lie.

Tara Campbell, a junior majoring in political science and broadcast and digital journalism, agreed with Strickland on the focus of energy independence as opposed to strictly environmental regulation.

“The United States has the ability to become energy independent,” she said. “Environmental policy is low on the priority list when we have the ability to increase economic growth and reduce dependency on foreign powers.”

A stand for worker safety