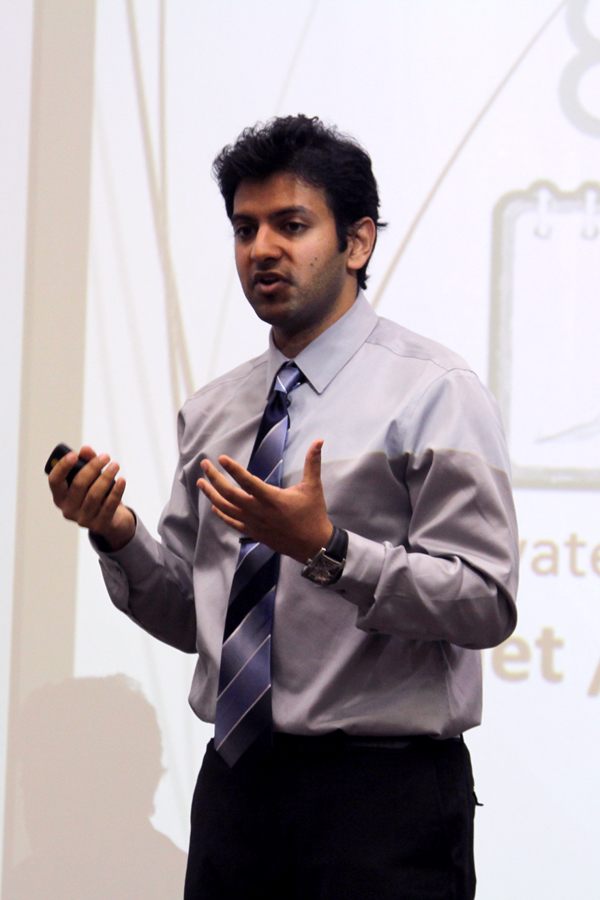 Students from universities across Southern California gathered at Hoffman Hall in the Marshall School of Business Friday through Sunday to compete in IBM’s Watson Academic case competition. Twenty-seven teams, each comprised of four students from USC; University of California, Los Angeles; California State University, Northridge and California State Polytechnic University, Pomona, were introduced to IBM’s Watson Engagement Advisor and were challenged to develop a unique idea for applying the Watson technology to a business or organization.

The Watson technology reads and understands technology in a manner similar to the human brain. The Watson Engagement Advisor is a tool businesses can use to interact with their customers where they would otherwise need to use a trained worker.

Over the first two days of the competition, representatives from IBM gave presentations to the students explaining how the technology works and the different ways it can be implemented. The teams then had until Sunday afternoon to come up with an idea for how the Watson Engagement Advisor could be used in a business, either real or fictitious.

The teams first gave five-minute pitches to a panel of judges consisting of both IBM representatives and USC faculty. The judges chose five finalists to give longer, more detailed presentations later in the day. The winner was announced at an awards ceremony Sunday evening.

Stephen Gold, IBM’s Vice President of Marketing and Sales Operations of Watson Solutions, explained that the competition presented an opportunity for both the students and IBM.

“For the students, it’s a great opportunity prior to them moving into the industry to get exposure for next-generation technology, think about the application of this technology and where in their chosen vocation they can put this to work,” Gold said. “We’re looking forward to hearing how these students envision the technology could take form.”

Sam Sharma, a first-year graduate student majoring in systems architecture and engineering at USC, worked with his team to develop an idea to increase efficiency in a fictitious business called “Leaf,” a nutrition research and consulting company.

Sharma saw the competition as a way to explore other industries and learn more about the potential business applications of technology such as Watson. His team decided to work with a company specializing in healthcare and nutrition to step outside of its comfort zone and try something different.

“IBM is a reputable company, and they brought a product they developed for us to see its real-world applications and to what domains it can be applied,” he said. “I think it’s a good way for all of us to explore new industries and opportunities.”

“I really wanted to expose new ideas for how to make use of this technology,” Xiang said. “I’m really fond of IBM’s Watson technology. I think it’s going to change the world.”

The results of the competition were not available as of press time.

A major rager at Springfest