Helton is key to the Trojans’ success 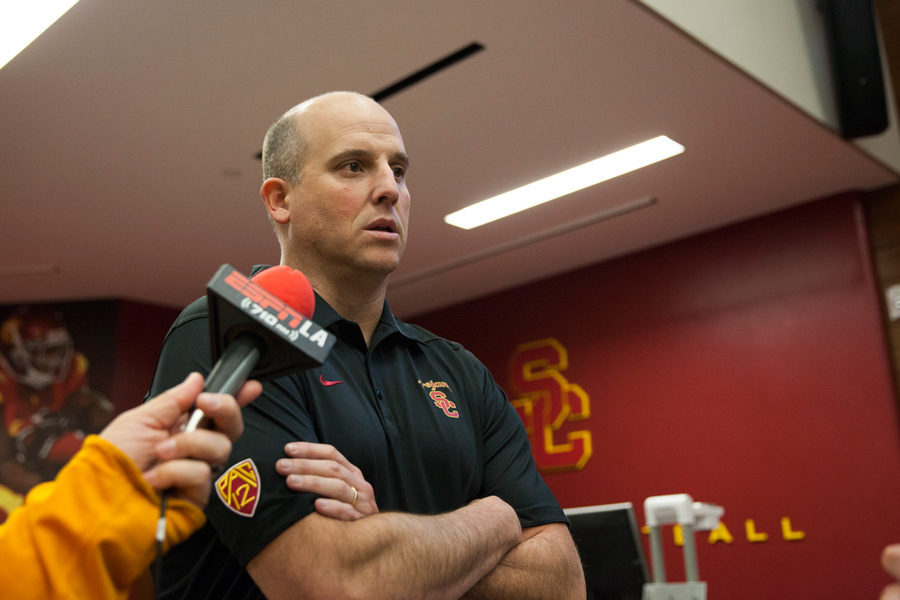 USC junior wide receiver Nelson Agholor has made making people shake their heads — be it opposing players, coaches or fans — a habit during his two-year career at USC. He has big-play ability and explosiveness that few can match and, similar to former teammate Marqise Lee, watching him run with the ball in his hands is something to behold. Stepping up · In his one game as interim head coach last season, Clay Helton led the Trojans to a 45-20 win over Fresno State. The win was instrumental in Steve Sarkisian retaining Helton as offensive coordinator. – Ralf Cheung | Daily Trojan

On Saturday, it was offensive coordinator Clay Helton that found himself shaking his head after Agholor caught a 75-yard touchdown pass from redshirt freshman quarterback Max Browne. Though the play was perhaps the highlight of the practice session, it wasn’t Agholor’s athleticism that caught Helton off guard. Instead, Helton was displeased with the location of the throw, which drifted toward the sideline when it should have been more toward the center of the field. Despite the impressive end result, Helton offered Browne more instruction than praise following the completion.

“If you know me, and these quarterbacks will tell you, I’m a perfectionist,” Helton said. “At the end of the completion on the stat sheet, it says ‘completion,’ but you try to make everything perfect.”

Attention to detail has gotten Helton this far in his career, a career that started as a graduate assistant at Duke in 1995 and now has him as the offensive coordinator for one of the most storied programs in college football. In over 200 games of coaching at the college level, Helton has been an assistant in all but one — the exception coming during his brief stint last year as USC’s interim head coach.

Helton became USC’s third head coach of the 2013 season after Steve Sarkisian was hired and Ed Orgeron resigned. With only a few weeks to settle the chaos and prepare the Trojans for the Las Vegas Bowl, things could have easily turned south for him, but Helton kept his players focused amidst the chaos and led the team to a 45-20 victory over Fresno State, a performance that made an impression on many head coaches across the nation, including Sarkisian himself.

“What I was impressed with [regarding] Clay was that it was a difficult situation when I got hired,” Sarkisian said. “For Clay to stand up in front of that team and take the reins, I was so impressed by that alone. I was kind of blown away with how he handled it all, and I couldn’t not hire him. Then I had to fight to keep him. A lot of people were coming after him, but we were able to keep him, which was great.”

Helton was one of just two assistants Sarkisian chose to retain from the previous regime, along with wide receivers coach Tee Martin. Helton was an integral part in the development of redshirt junior quarterback Cody Kessler last season, and following Kiffin’s departure, he served as the team’s offensive playcaller. In USC’s final nine games of the season, the team averaged 31.8 points and 410.9 yards per game en route to a 7-2 finish.

Given the relationships Helton forged with the players and the results he was able to get out of them, the decision to retain him, Sarkisian says, was an easy one, and one that will help facilitate and expedite the installation of Sarkisian’s new offensive scheme.

It might seem that convincing Helton to return to his assistant position, after having success as the head coach, would be a tough task. But Helton asserts that his priority was staying at USC, a place where he had served as an assistant since 2010 after a 10-year stint at Memphis. Helton also insists that there is no awkwardness between him and Sarkisian following Helton’s demotion back to an assistant position.

“I absolutely love being a part of the USC Trojan staff, working for Coach Sarkisian,” Helton said. “To [work with] a guy that is so brilliant and offensively minded, to be a part of this system again and help in any role that I can is very satisfying and very rewarding. I’m glad to be a USC Trojan.”

USC players and fans should also be thankful that Helton is a Trojan, and should enjoy Helton’s guidance while it lasts. Because the more points the Trojans are able to put on the scoreboard this upcoming season, the more likely the possibility that Helton lands another head coaching gig somewhere else.

When that time comes, hopefully his second chance lasts longer than his first.

Nick Selbe is a senior majoring in communication. His column, “Inside the 20s,” runs Tuesdays. To comment on this story or to tell Nick that “In the Nick of Time” would be a better column title, visit dailytrojan.com or email Nick at nselbe@usc.edu.

Trojans travel to Malibu for rematch with Waves