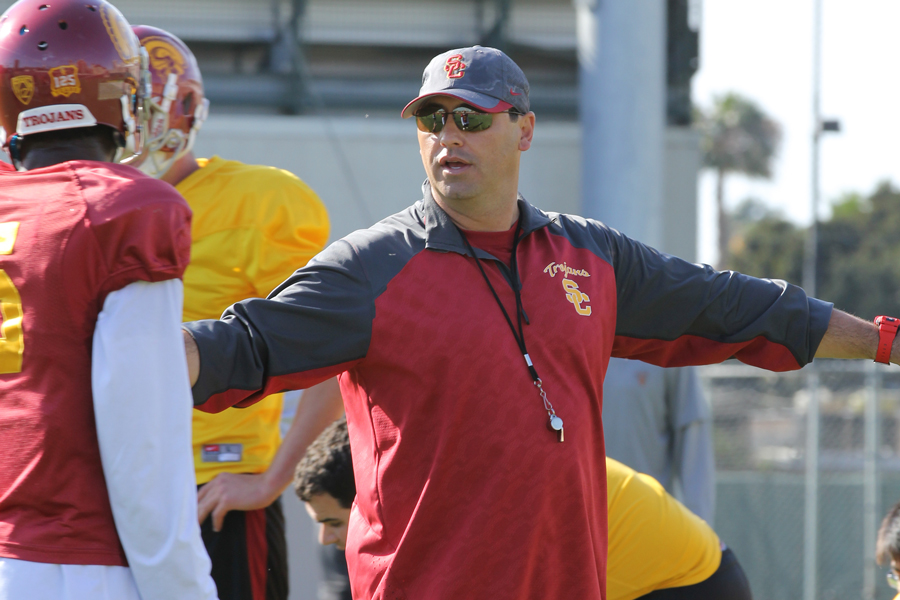 The greatest takeaway from the team’s 10th spring practice is that head coach Steve Sarkisian is moving closer to being ready to name a starting quarterback. This announcement is most likely to occur before spring practice ends. Sark times · Head coach Steve Sarkisian will have to choose between redshirt freshman Max Browne and returning starter Cody Kessler at the quarterback position. Both players have been inconsistent this spring. – Nick Entin | Daily Trojan

“When I have a pretty good feeling of it, I’m going to let it sit for a little bit,” Sarkisian said. “I suspect we would do it before the end of the spring.”

Both redshirt freshman Max Browne and the incumbent in redshirt junior Cody Kessler entered the fourth week of the spring dueling for that highly touted No. 1 spot on the depth chart.

Though Kessler has the experience of battling for the starting job, as he did last spring, Sarkisian thought that neither quarterback separated himself.

“I thought it was a hard day for the quarterbacks,” Sarkisian said. “Some things going on around them and how they responded to them made it difficult.”

The offense worked on a silent snap count for the first time this spring, which caused some errant snaps. Sarkisian explained that this can really take the air out of practice.

After having one of the deepest backfields in the nation, the Trojans had only one healthy scholarship running back on Tuesday in redshirt junior Tre Madden, who continues to carry a heavy load this spring.

Madden asserted that expectations are always high at USC and that with the team’s new high-potent offense and imposing defense, the team will be a force to be reckoned with next season.

“We were a young team last year and we are going to have more experience this year,” Madden said.

At the wide receiver position, junior Nelson Agholor continued his spectacular spring, catching another long touchdown pass. He pulled one in from 75 yards out in Saturday’s scrimmage.

Sophomore Darreus Rogers continues to emerge as the No. 2 wide receiver, but still has some things to work on, Sarkisian said.

“He needs to develop [a] consistency factor, and then show it all the time,” Sarkisian said.

No Pads, No Problem

The defense received praise from Sarkisian once again for their energy on their side of the ball, resulting in a lot of forced throws that resulted in turnovers while also getting third-down stops.

“I thought the defense showed great intensity today,” Sarkisian said. “I thought they executed a lot better than they did on Saturday.”

Senior defensive back Gerald Bowman and redshirt junior defensive lineman Antwaun Woods were given credit for their level of activity in practice.

Even with Josh Shaw, Su’a Cravens and Leonard Williams out, the defense continued to get the better of the offense.

“We have a chance to be really good when you factor in those three guys mixed with the development of our other players,” Sarkisian said.

He also mentioned how advantageous it is that the team has 22 quality players on defense.

2015 quarterback David Sills, who is verbally committed to the Trojans, visited practice on Tuesday. Sills was recruited in seventh grade at the age of 13 by former USC head coach Lane Kiffin. He will go on to visit Kiffin and Alabama later in the week.

Tuesday’s practice was the third of three practices to be played with no pads this spring.

In response to “To fight injustice, women must be unified”