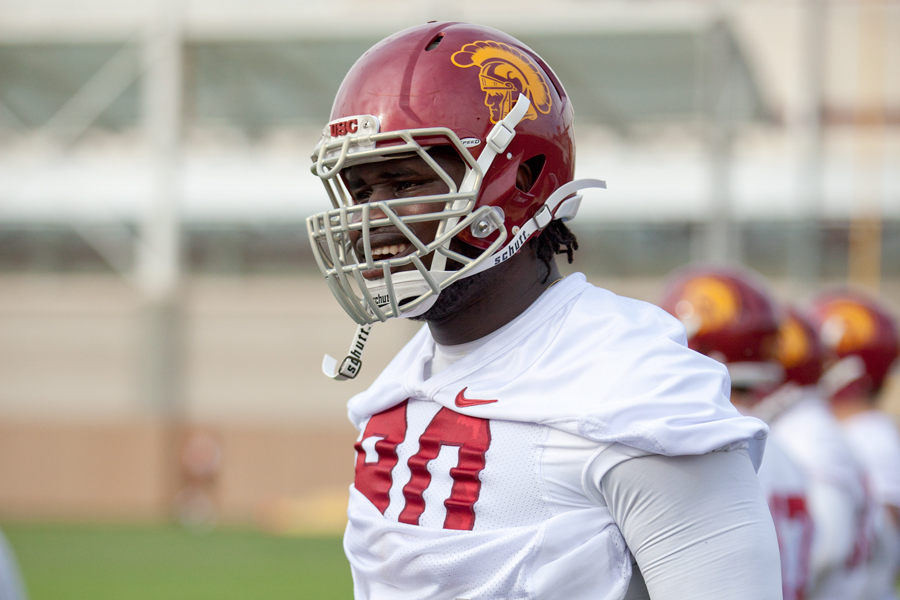 The USC defense seemed to get the better of the offense in the Trojans’ 11th practice of the spring. Both sides of the ball have adjusted well to head coach Steve Sarkisian’s quickened pace, and on Thursday the defensive line in particular put its progress on display, causing several negative plays for the offense. Fitting in · Resdhirt junior defensive lineman Claude Pelon has shown rapid improvement over the course of spring practice. The transfer from La Mesa Community College in Mesa, Ariz. will fight for a starting spot in 2014. – Ralf Cheung | Daily Trojan

“I was really encouraged by the defensive line,” Sarkisian said. “I was proud of Kenny Bigelow and Claude Pelon, two guys who, in the first couple days of spring ball, could barely stand up. Today, they’re making plays in the backfield in the fourth quarter of practice. That’s telling me a lot.”

Practicing an up-tempo offense serves a dual purpose — it gets USC’s offense ready for the type of scheme it will play when the season rolls around, and it also prepares the defense to play against fast-paced opponents, which, in the Pac-12, includes teams like Arizona, and UCLA, among others.

“We’re gonna face so many of these up-tempo teams that part of their goal is to wear you down and make their plays in the second half. Today was really meant to work the guys, and I thought they responded very well.”

Senior outside linebacker J.R. Tavai returned to practice today after missing the past few weeks. His impact was felt immediately, as he made multiple tackles for loss, including one on freshman quarterback Jalen Greene. Tavai tossed Greene to the turf as he tried to change direction.

“We’re a defense with an attitude,” Tavai said. “That’s what it’s supposed to look like. He [Greene] tried to spin on me, and I wasn’t gonna have it. But it’s gonna make him better.”

Tavai got limited reps at the beginning of last season but came on strong in the second half. He finished the year with 52 tackles, including eight tackles for loss, good for third on the team. He also had 3.5 sacks last season, second-most among returning players.

A hybrid outside linebacker who has played defensive end in the past, Tavai appears poised to play a big role on the defense as an edge rusher.

Among all the position groups, none appear to be as deep and talented as the Trojans’ linebacker corps. Redshirt senior Hayes Pullard is the leader of the pack, and other returners, such as redshirt junior Anthony Sarao and senior Lamar Dawson, give USC plenty of experience.

But several newcomers have shined this spring. Redshirt sophomores Scott Starr and Jabari Ruffin are talented outside rushers, as is freshman Quinton Powell. Another inexperienced player, sophomore Michael Hutchings, plays in the middle of the field, and is ready for game reps after sitting out last season.

Throughout spring, Hutchings has alternated between the first and second units. Regardless of whether or not he starts, he should play many meaningful snaps once the season begins.

The transition into a larger role won’t be easy, but Hutchings has plenty of ability, and has leaned on veterans like Pullard to help him adapt.

I’m taking in everything I can from him as far as on- and off-the-field knowledge,” Hutchings said. “How to carry yourself, how to act on the field and just anything I can get from him. He’s been here for five years, and he’s got a lot of experience under his belt, so I’m just trying to soak as much in as I can.”

Sarkisian said that he intends to let incoming freshmen Adoree’ Jackson, John “JuJu” Smith and Rahshead Johnson take snaps on both sides of the ball once they arrive on campus in the summer.

Defensive Coordinator Justin Wilcox compared sophomore safety Su’a Cravens to Washington linebacker Shaq Thompson. Thompson, who switched from safety to linebacker, is one of the most dominant defensive players in the conference.

“They’re both big, athletic guys who love football and have really good instincts,” Wilcox said. “Su’a can play safety, he can play a big nickel position for us. He’s a very good blitzer and a very good tackler.”

USC will practice next on Saturday at 11 a.m. at Howard Jones Field.

School stabbing should not detract from gun control efforts