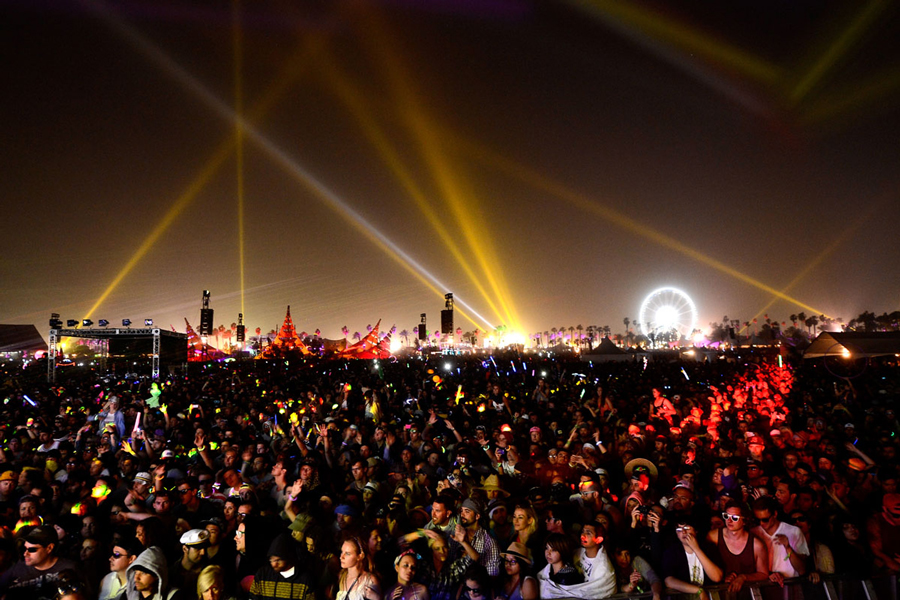 The giant machine of bro tanks, charging stations, crop-tops, port-o-potties, shuttles and tribal prints that is Coachella is upon us once again. The only weekend of the year when grown men can wear lights on their fingers and dress like they’re 17, the festival featured its usual mix of crowd-pleasing superstars and up-and-coming acts, all strewn about a surrealist field of sculptural installations and giant tents and stages. If there was any noticeable difference between this and past years’, it’s that the festival is continuing on its on trajectory away from its humble indie-rock beginnings and toward the corporate grandiosity of raves such as Hard or Ultra Fest. After a 12-year hiatus, the highly anticipated OutKast reunion between- André 3000 and Big Boi took place Friday night at the main stage. Taking a page out of Flying Lotus’ book, they performed from behind a cube of transparent screens onto which images were projected as they played through their older hits. Despite the impressive visual effects, the show could hardly be considered a success. Distracting yells from the DJ/hype man, an unenthused — even slightly perturbed — André 3000 and a puzzling guest appearance by Future all contributed to a disappointing performance. Sure, André and Big can hardly be blamed for the sound problems (the latter interrupted his verses about 10 times to say, “Turn me up in the monitors,”) or the blatant advertising for Future’s new album that was most likely forced by his record company. But, especially on André’s part, there was a distinct lack of enthusiasm contrasted to the hype preceding their reunion. Decked out in a baseball cap, a sweatshirt and overalls, André’s nonchalant demeanor was reflected by the crowd’s response. Even the most devout OutKast fans who knew every word to their most obscure songs found themselves underwhelmed.

In contrast to OutKast’s inability to live up to their ’90s reputation, Queensbridge rapper Nas had the outdoor stage looking more like 1994 than 2014. Nearing the 20th anniversary of his classic album Illmatic, Nas was joined by Jay Z as they played “Dead Presidents II,” a song that started a public feud between the two MC’s in 1996. With this unpleasantness behind them, the duo played off of each other and energized the crowd with their presence. Besides the cordiality between Jay Z and Nas, the only reminder that it was not, in fact, 1996 was the sea of smartphones that popped up to record the magic and block everyone’s view as soon as people realized it was Jay Z who had appeared on stage.

An obvious parallel to this example of the frustrations of 21st century concert-going came during Chance the Rapper’s set. Comparable to a young Nas, or maybe The Pharcyde, Chance gained notoriety not through agents or marketing, but old-fashioned rhyming skills and a fresh, underground aesthetic. With a possible nod to André 3000, the 21-year-old Chicago native was clad in overalls, but didn’t let that stop him from dancing and jumping around, even kicking above his head at one point.

Many fans knew all the words to even his lesser-known hits, and his concert had an intimate feel. That is, until a small figure in a bucket hat and bandana pranced on stage and Chance shouted, “Justin, what the f—k is up?” The show instantly went from a Chance the Rapper show to a Justin Bieber show, as giddy fans who had never heard of Chance flocked to get a glimpse of the golden child. Even raver bros heard the commotion and pulled themselves away from the dope drops of the electronic dance music tent, only to look back at their friends with disgust when Chance told them, “Give it up for Justin Bieber!” Still, Chance’s performance was a highlight of the weekend, as he brought the energy of his studio tracks and infused them with intricate guitar solos and drum parts that can’t be heard on his albums. And as he moves from unknown to Bieber collaborator, his fan base reflects the change, which gives a whole new meaning to his tour, which is called “The Social Experiment.”

Hard rockers Queens of the Stone Age had a social message of their own, which they conveyed with a blatantly preachy performance piece. This consisted of a suited woman who approaches a gas pump set up in front of the stage. She then goes on to maniacally drink the “gas” from the pump until she falls over, as the meter continues to count the money being made. Since they were playing to a crowd that was in the process of desecrating a field with plastic water bottles and Styrofoam plates, the environmentally conscious skit was not without irony.

With the swarms of concertgoers being shuttled into the Empire Polo Club comes an equally impressive swarm of staff that somehow manages to make the field spotless before the next day. With $9 beers and $1,500 V.I.P. passes, the festival is able to pay for a ludicrous number of workers, strobe lights, tents and even a giant inflatable spaceman on wheels. Only in regard to the shuttles did Coachella find itself underprepared. The first night, many people who stayed for all of OutKast’s set and had paid for the shuttle service to take them back found themselves caught in a sluggish zoo of people lined up to get on a limited number of shuttles. Many didn’t get back until 5 a.m., but to Coachella’s credit, more shuttles were hired for the next two days and this problem was avoided.

Much of the weekend was filled with a paradoxical feeling of people deploring Coachella’s moral vapidity while consciously being a part of it. For those ready to whip out their cell phones and Snapchat their friends to show them what big names they were seeing, Coachella did not disappoint. Surprise guest appearances from Beyoncé, Gwen Stefani, Snoop Dogg and even Blondie will be remembered in the following days.

With that being said, the festival still manages to cater to the hipster sensibilities of those who scoff at big names and Top 40 hits. Before his set, Jeff Mangum, lead singer of indie darlings Neutral Milk Hotel, politely asked the crowd, “Can I ask you to put your cameras and cell phones away? I like to see you guys and be present here right now.” Their mostly acoustic set, which was not blown up on the big video screens, was a reprieve for those uninterested in the flashy lasers and production of Calvin Harris, Duck Sauce, Skrillex and the like. For those with jazzy sensibilities, Trombone Shorty and The Preservation Hall Jazz Band surely entertained. And acts such as Bryan Ferry, The Replacements, and even Arcade Fire joined by Blondie provided the older crowd with some entertainment.

Though there are still those purists who come to see their favorite rock bands and possibly discover some new ones, one can’t help but feel that these people are being gradually outnumbered by those who come to see and be seen, or else just to get sufficiently inebriated and go hard to the booming bass of whatever DJ’s dance remix of a Rihanna song is currently popular. Complete with the Sephora Collection Beauty Studio, exclusive after-parties, blogs devoted to festival fashion and the inexplicable “Coachella Diet” (yes, that is a real thing), one can almost feel the soul being sucked out of what started out as a music festival for music lovers.