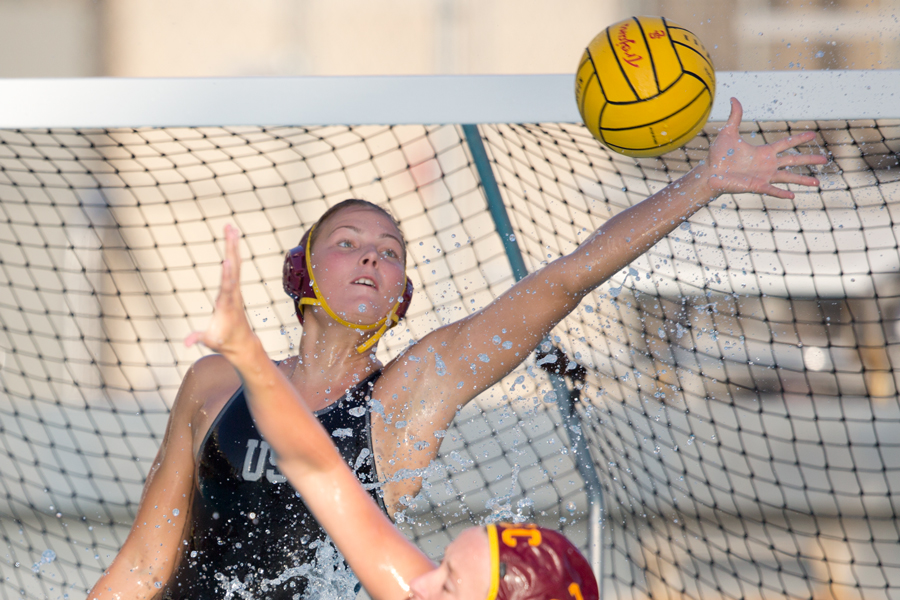 Though it was just the regular season finale, Wednesday’s USC women’s water polo match had a NCAA tournament game type atmosphere surrounding it. The No. 3 Women of Troy (22-2, 5-2 Mountain Pacific Sports Federation) squared off against visiting crosstown rival No. 2 UCLA (23-3, 5-1) in a crucial playoff-seeding matchup. As Senior Day ceremonies came to an end, the Women of Troy’s attitude drastically changed. All the smiles and cheering immediately ended, and it was all business beginning with the opening whistle.

Unlike many other games this season, offense was scarce for both teams. Physicality, however, was not. Capitalizing on an early USC penalty, the Bruins got on the scoreboard first as a skip shot found its way past senior goalie Flora Bolonyai. This did not deter the Cardinal and Gold, though, as junior two-meter Eike Daube sent a scorcher into the corner to net the score at one.

Daube, who entered the contest with 35 goals on the season, has collected 10 goals in the past three games.

Entering the second period, both defenses remained poised and in control. Following a tough foul by freshman driver Ioanna Haralabidis deep in the USC zone, UCLA was awarded a 5-meter penalty shot. Bolonyai, though, remained strong in the cage and tipped the rocket just wide.

With just over two minutes to play in the half, the Bruins ended the scoring drought, as a shot from the top of the formation bypassed the USC defense and sneaked in the bottom-left corner. Trailing once again, the Women of Troy responded as they had in the first quarter. While on a 6-on-5 powerplay, junior driver Monica Vavic drilled a shot across the cage to even the score heading into intermission.

“I was left open and I wasn’t afraid to shoot. I think that we were hesitating on our shot selection and that’s what ended up making us take shots we didn’t necessarily want,” said Vavic, USC’s No. 7 all-time leading scorer. “The shots that I missed were the ones that I hesitated and was not aggressive when shooting. The ones I made, I just went for it. I was confident and aggressive.”

Out of the break, the Women of Troy exhibited a stroke of brilliance on the offensive end. Just 20 seconds into the second half, senior driver Kelly Mendoza used positioning directly in front of the net to punch one through and give USC its first lead of the game, 3-2. This lead, however, would not last long.

Less than a minute later, the visiting Bruins responded with some luck. Exhibiting strong ball movement, a UCLA shot ricocheted off a USC defender, redirecting it into the goal to even the score, 3-3.

The Bruin’s scoring did not end there. With less than two minutes to play in the third period, a bounce shot skipped over Bolonyai’s head to pull UCLA ahead. Only a minute later, a scrum in front of the USC cage left the ball sitting alone. Kodi Hill scooped in another for the Bruins to end the period leading the Women of Troy, 5-3.

“[Playing from behind] takes us out of our confidence and you start second guessing yourself,” Vavic said. “We did comeback and tie it and go up by one. We just need to make defensive stops after we score.”

Trailing heading into the final period for just the second time this season, the Women of Troy did not back away.

Left alone up top, Vavic found the back of the net for the second time to pull USC within one. But the quick Bruin counter-attacks remained an issue. Only 30 seconds after Vavic’s deep shot, UCLA responded once again with a rip across the cage to increase their lead. The Bruins would hold onto the lead, finishing off the Women of Troy, 6-4, ending USC’s five-game home winning streak.

“You can take losses two ways: sometimes they can break a team or you can learn a lot and they can make you in the end,” said senior co-captain Kaleigh Gilchrist. “Hopefully we can learn a lot from this loss and keep improving into conference play.”

In the losing effort, Bolonyai registered 12 saves, tying her for most in program history.

USC will be back in action next weekend, as they host the MPSF conference tournament as the No. 3 seed behind Stanford and UCLA. The Women of Troy understand how to use this loss as fuel to return to their winning ways.

“We had a lot of great opportunities and we just need to finish them. It’s a tough loss, but it just fires you up to work hard,” Gilchrist said. “You got nine days until MPSF and the NCAA. We’ve got a lot to work on, but we’ve got time.”