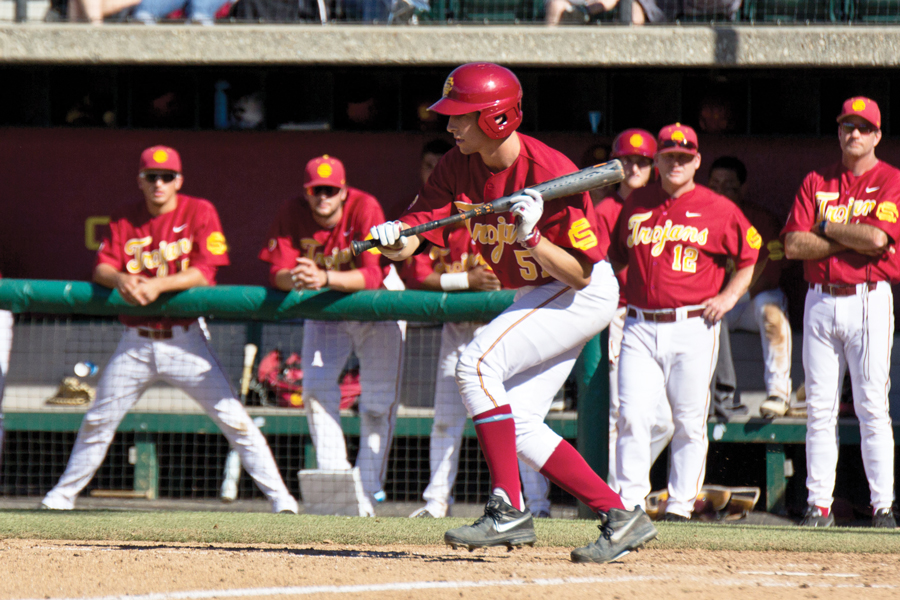 The Trojans dominated the Arizona Wildcats at Dedeaux Field last weekend, coming away with a 3-0 sweep, including a shutout on Thursday and Saturday as well as a 12-inning victory on Friday. Catch a break · Junior catcher Garrett Stubbs is the only Trojan to have started every game for USC this season. Through 37 contests, the Del Mar, Calif. native is batting .291 and has stolen four bases. – Joseph Chen | Daily Trojan

USC ended the Wildcats’ winning streak with many impressive defensive plays and strong starts from each of the series’ pitchers. The starting pitchers in particular led the Trojans to victory by only giving up a total of four runs for the series. Junior Wyatt Strahan guided the team through nine innings to a 1-0 shutout on Thursday and senior Bob Wheatley pitched a 2-0 shutout through seven on Saturday.

USC head coach Dan Hubbs said the Trojans’ pitching during the Arizona series was a defining moment in the season.

“Our pitching in general was fantastic this weekend,” Hubbs said. “Strahan, Wheatley and [sophomore Kyle] Twomey really got us where we needed to be in terms of pitching smart. I thought they were fantastic and that the team in general played well-rounded games.”

Tonight, the Trojans will try to extend their five-game winning streak against the Hawai’i Rainbow Warriors at Dedeaux Field. The Big West team currently holds a 15-21 overall record as well as a 4-6 record on the road. The Rainbow Warriors have a total team batting average of .236 and a team ERA of 3.47.

The Trojans will surely bring some momentum into tonight’s matchup after right-hander Strahan was named the Pac-12 pitcher of the week. Strahan threw a complete-game shutout in USC’s 1-0 win over Arizona last Thursday.

Though the Trojans are expected to enter tonight’s game confident and prepared after last weekend’s series sweep, Hubbs believes that his team must remain focused on playing its  best all-around baseball to come out with a win over the Rainbow Warriors.

“The series against Arizona has given the guys lots of optimism, especially now that our starting pitching is back on track, but all that means nothing if we come out flat against Hawai’i,” Hubbs said. “Playing on a Tuesday is a different atmosphere than playing on a weekend during a broadcasted game with a good crowd. It’s easy to get up for those games. We need to keep up our intensity tonight to beat Hawai’i.”

Despite the Trojans’ major improvements in pitching and defense, the team still needs to concentrate on coming up with more hits at the plate as well as advancing runners into scoring position. Last weekend, the Trojans only produced eight runs throughout the series.

Coach Hubbs feels that USC will best be able to beat the Rainbow Warriors tonight by running up the opponent’s pitch count and playing smart at the plate.

“Sometimes I think we get too greedy and try to drive the ball over the outfielders’ heads, but that’s not our game and that’s not who we are,” Hubbs said. “We just need to stay low and hard at the plate. We’ll get our doubles and our homers now and then, but we really need to consistently stay within ourselves and not try to out-hit the outfielders.”

Like the Trojans, Hawai’i has struggled to come up with big hits lately, as evidenced by the fact that the team has lost eight of its nine most recent games.

Despite their recent struggles, Hubbs emphasized the importance in taking Hawai’i seriously as an opponent.

“Hawai’i is a quality team who’s been struggling with the bat a bit but pitching pretty well, which sounds similar to our situation,” Hubbs said. “We know that when we don’t play well we lose, but when we do play well we’ll win. We can’t look past Hawai’i because if we do, they’re going to shock us and beat us. For us to be a good team that can make a serious run in the post-season, tonight is a game we have to go out there and win.”

Sophomore right-hander Brooks Kriske,  who has a 1-0 record as a starter this season, will lead the Trojans on the mound tonight against the Rainbow Warriors at 6 p.m. at Dedeaux Field.

Following Tuesday’s match, the Trojans will head to Westwood to take on crosstown rival UCLA in a three-game series starting Thursday.