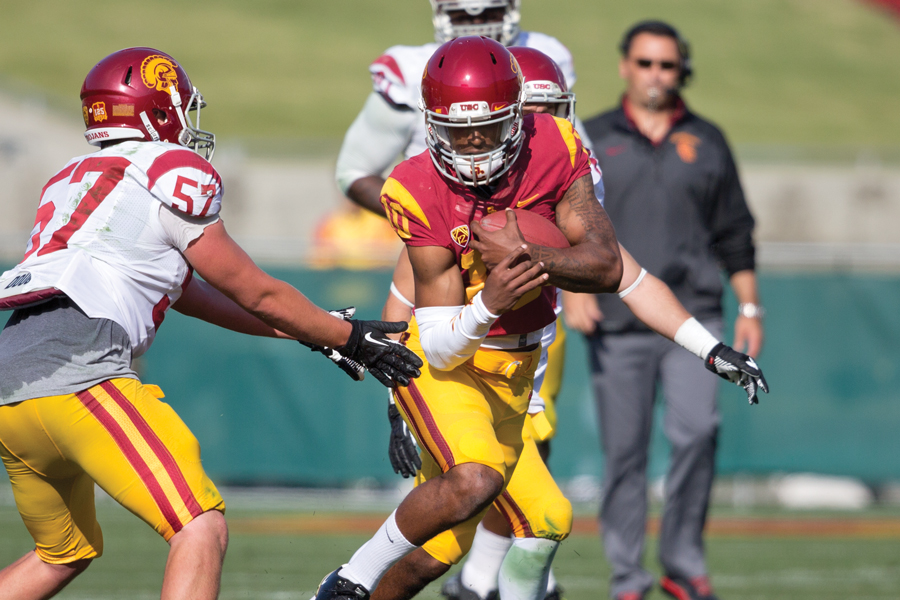 To his coaches and teammates, Jalen Greene is fearless. The true freshman quarterback, who graduated a semester early from athletic powerhouse Junipero Serra High School, in Gardena, Calif. has acted like a seasoned veteran rather than a wide-eyed newcomer since he arrived on USC’s campus this spring. While his former classmates prepare themselves for the senior prom, and with former Serra teammates and future Trojans Adoree’ Jackson and Olajuwon Tucker set to arrive at USC in the summer, Greene has spent his days taking command of the offensive huddle as if he were the Trojans’ starting quarterback. As a three-year starter in high school who won CIF and state championships as a junior, Greene has the accolades that warrant such confidence.

But if Greene is being honest, as he was during his first interviews with the media at the end of spring practice, he admits that confidence did not come so easily at first.

“I was a bit nervous,” Greene said of his first time in a USC huddle. “I don’t know that any of the guys will tell you that they noticed that, though. It’s about coming out here and commanding the huddle, that’s what quarterbacks have to do to show leadership.”

Greene was not on the Trojans’ radar for much of his recruitment phase, but developed a strong relationship with Steve Sarkisian before he was named USC’s new head coach. After Sarkisian moved south, Greene, whose hometown is Inglewood, Calif., was quick to follow him right back home.

“I wasn’t really looking into USC that much before the coaching change,” Greene said. “Once the coaches changed, they all started calling me and I started looking into it. I believed in Coach Sark’s system that he ran up at Washington. I knew a couple guys that he recruited that were up there, and they told me they like him as a coach. He does a lot, and he’s a great guy.”

That Greene was a late addition to USC’s recruiting class of 2014 is fitting, considering that to many Trojan fans who obsessively check recruiting rankings and online message boards, that is exactly what Greene is viewed as — an afterthought.

Redshirt freshman quarterback Max Browne was the top quarterback in his class. Ricky Town, a USC commit who is ranked as the No. 5 quarterback in the class of 2015, according to ESPN, is already being heralded as the next great Trojan signal caller, which seems to leave Greene as the odd man out as far as playing time is concerned.

But that’s not how Greene sees things. Though he was written off early on in this spring’s quarterback competition, his goal is to win the job someday in the future. While his athleticism might allow him to earn playing time at another position, Greene has no intentions of changing anytime soon.

“It didn’t affect me that much, hearing that Cody [Kessler] was starting,” Greene said. “I’ve been learning a lot from him and Max [Browne], and I just want to continue to learn from them. I had higher hopes for myself this spring. I wouldn’t say I had a bad spring, but I progressed a lot, and I just have to keep progressing each day.”

Knowing that playing time would be hard to come by this season, and that little was expected from him, Greene played with confidence all spring and left a strong impression on his coaches. He might be destined for a redshirt season in 2014, but he showed enough talent to instill confidence that he could be “the guy” in the coming years.

“I think Jalen has a very high ceiling here,” Sarkisian said. “I think his future is very bright. He has steadily improved along the way. We have high expectations for him.”

While the rest of the USC offense struggled to grasp Sarkisian’s new offensive scheme, Greene picked it up quicker than most due to the fact that he ran a very similar offense in high school. This familiarity helped ease the growing pains that every young player goes through when he or she goes against college players for the first time.

“I’ve been really, really pleased with him,” offensive coordinator Clay Helton said. “I’m very excited about how fast he’s picked up the concepts and how hard he’s working mechanically to fix some things. You can see the liveliness of his arm. He has very, very good tools and will be a very promising quarterback here.”

Currently, Greene is clearly No. 3 in USC’s pecking order at quarterback. He admittedly struggled with the speed of the defense at times during practice, and his mechanics are still a work in progress. That he will be surrounded by more polished competition for years to come gives credibility to the notion that he might be more likely to see the field at another position, or even another school.

Still, Greene believes that it’s far too early in his career to write him off yet, and that someday he will be announced as USC’s starting quarterback.

“That’s the plan,” Greene said. “I’m just gonna keep competing every time I’m here. I came here to play quarterback. I was recruited as a quarterback. Hopefully that’s what they have in store for me.”