USC to lead the pack with defense 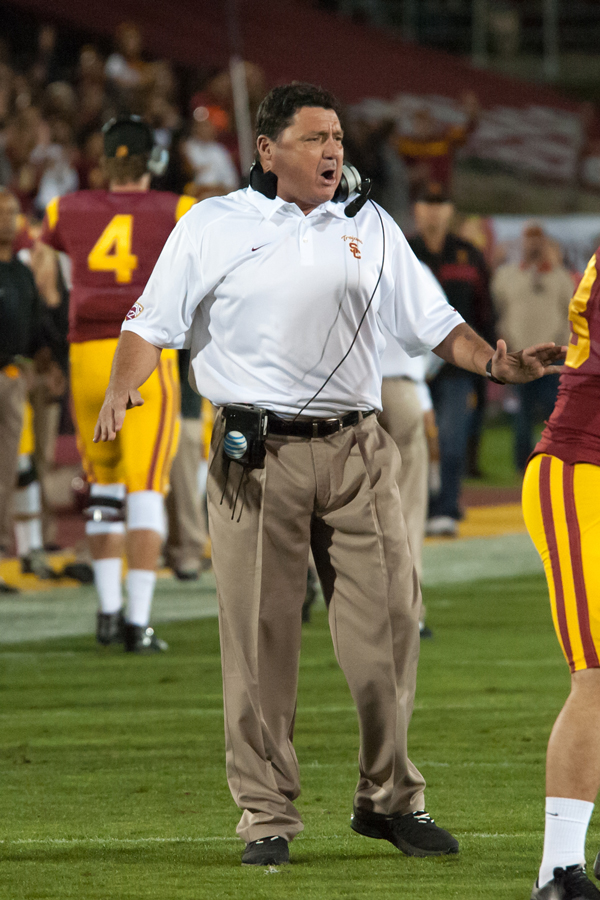 When you think of smash-mouth defenses in college football, it’s hard not to rattle off a list of SEC programs that come to mind. Alabama, Auburn, Florida, LSU — all of these names carry a distinct aura of having the type of physical ballhawks and devastating strength in the trenches that evoke a certain brand of football. Defense, as the saying goes, wins championships. And if we break it down to conferences, seven out of the last eight BCS National Champions have been SEC teams. The Pac-12, on the other hand, hasn’t won a national championship since it was the Pac-10 — the Trojans destroyed Oklahoma en route to a 55-19 victory in 2005. Pardon me for sounding like ol’ Grandpa Simpson, but back in those days, it was the Trojan defensive dynasties led by the likes of Mike Patterson, Lofa Tatupu, Clay Matthews and Brian Cushing wreaking havoc on their hapless, undersized opponents in the Pac-10/12. Since then, the perception of defensive power in college football has swung from sunny Southern California skies to the charmed football culture of the Deep South — but that doesn’t mean that the Pac-12 is now a defensive wasteland.

It’s no secret that the Trojans had a rather strong defensive presence last season under former head coaches Lane Kiffin and Ed Orgeron. The Trojans had 17 interceptions and eight forced fumbles last season, and finished 16th in the nation in scoring defense, allowing 21.2 points per game. The knock-down, drag out defensive style employed by the Trojans last season and the pro-style, run-heavy offense was reminiscent of the type of play of many SEC teams.

The Trojans’ one (rather glaring and massive) defensive hiccup last season was against Arizona State: USC gave up 612 yards of total offense and seven touchdowns. But for the Trojans to end up with the 16th best scoring defense in the Football Bowl Subdivision in a conference that is infamous for housing high-powered offenses is no small feat. The fact that the Trojans have to compete with such stiff offensive competition only makes their defensive prowess that much more impressive.

The spring game was a revelation for the Trojans: The defense that had been playing “catch-up” all spring with the implementation of head coach Steve Sarkisian’s new uptempo offense seemed poised to execute in the red zone to prevent touchdowns. It’s not a given that USC’s offense will repeat such a shaky performance going into fall camp, but give credit where it’s due: the Trojans’ defense is recovering nicely from the loss of Dion Bailey, Morgan Breslin, George Uko, Demetrius Wright and others to both graduation and the NFL.

At the head of this USC optimism is former 5-star recruit Su’a Cravens, whose performance as a true freshman safety last season was considered a pleasant surprise. Given an extra year of practice in a college-speed defense, Cravens will only get stronger and more experienced — a scary thought for Pac-12 offenses that were reluctant to throw intermediate routes and running between the tackles against a stout front seven that was flanked by the then-true freshman.

The defensive line is also receiving its share of reinforcements, with former 5-star recruit Kenny Bigelow filling in at tackle and transfer-recruit Claude Pelon providing much-needed depth with the departure of Breslin and Uko. Bigelow and Pelon will join All-American junior defensive lineman Leonard Williams, who was virtually unstoppable when he stepped on the field last season. Williams told Bruce Feldman of CBS Sports that he was playing at “65 percent” last season during his All-American campaign due to his torn labrum.

Williams has sat out for much of the spring, but predicts that he will be 100 percent before summer. I don’t think I need to state what a fully healthy Leonard Williams means for opposing running backs and offensive linemen next season. Unlike wide receivers such as Marqise Lee, the capabilities and performance of Williams don’t suffer from a drop-off due to a quarterback change or a different system on offense. Williams made headlines under former defensive coordinator Monte Kiffin’s system by making the Freshman All-American Team, in addition to making the All-American Team under Clancy Pendergast’s 5-2 system last season, and in all likelihood he will swallow up mere mortal offensive linemen en route to another All-American honor this coming season under current defensive coordinator Justin Wilcox.

Williams is the linchpin in the front seven, and redshirt senior defensive back Josh Shaw will helm the Trojans’ secondary. Shaw, who returned for his senior season despite competitive prospects in the NFL, was integral in the Trojans’ pass defense in the second half of last season. Though he’s not quite a shutdown “island” cornerback just yet, he has the reliability and instincts to prevent big plays — and create a couple big plays in his own right.

The Trojans are no longer the defensive juggernaut they once were in the early-to-mid 2000s under Pete Carroll — that ship has sailed. What is possible, and is happening before our very eyes, might be the power of Pac-12 offenses shaping subsequently strong defenses. The Trojans — the last Pac-10 or Pac-12 team to win a national championship — are en route to leading the pack to making the Pac-12 a conference not just renowned for its innovative offensive schemes and thrilling quarterback play, but hard-nosed, nasty defense — and it should only be a matter of time before that defense wins championships.

Euno Lee is a senior majoring in English literature. He is also the Managing Editor of the Daily Trojan. His column, “Euno What Time it is,” runs Wednesdays.

USC tunes up for the MPSF tournament
Scroll to top