USC tunes up for the MPSF tournament 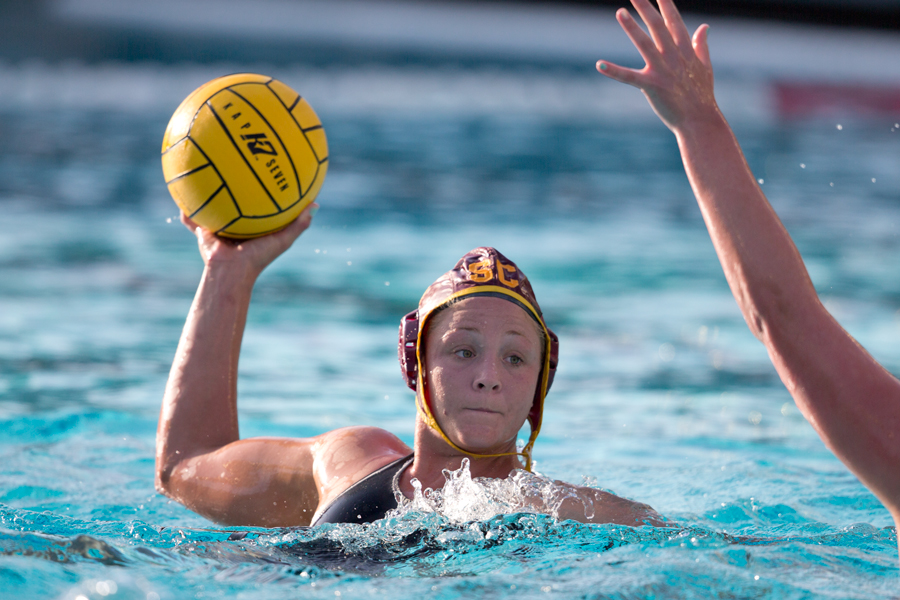 After finishing the regular season with a disappointing 6-4 loss to the No. 3 UCLA Bruins last week, the No. 2 USC women’s water polo team (22-2, 5-2) jumped back into the pool one last time before kicking off the Mountain Pacific Sports Federation playoffs this weekend. This time, their opponent wasn’t representing a particular university, but rather the red, white and blue. The Women of Troy played host to the U.S. Junior National Team in a friendly exhibition match on Tuesday afternoon. Double dip · USC junior two-meter Eike Daube played for the Women of Troy yesterday in an exhibition contest against her other squad, the USA Junior National Team. Daube has 36 goals for USC so far this season. – Ralf Cheung | Daily Trojan

“I’ve trained with a lot of these girls before so it’s almost like a reunion,” said junior two-meter Eike Daube, who was a member of the U.S. Junior National Team in 2013. “It’s definitely good to get out of the routine of practice and scrimmage. I thought it was a really good transition for us, especially with the games coming up this weekend.”

Displaying a complete change of form following a season-low four goals against the Bruins, the Cardinal and Gold got on the scoreboard early and often against the National Team. Less than a minute into the game, junior driver Monica Vavic rocketed in a goal to set off the scoring frenzy.

Leading the collection of current high school and former collegiate players making up the national team, the Women of Troy took control of the game on both sides of the ball, gathering a 10-3 advantage by halftime.

After breaks in between each quarter to work on powerplay strategies, the Women of Troy continued their domination into the fourth period, leading 16-6. Though the offense was brought to a standstill in the final quarter of play, a stout defensive effort carried USC to victory, 17-9.

For the Women of Troy, who head into the MPSF tournament this weekend, the scrimmage was a valuable tool for practice.

“It’s fun. We know them from the past and every game is good practice for us,” said senior co-captain and current U.S. National Team member Kaleigh Gilchrist. “Right now our number one priority is USC’s team and coming into the postseason we need every chance we can to practice on our fundamentals and keep working. It was a good practice.”

Following a versatile offensive display on Tuesday, the Women of Troy look to continue the streak and put the troubles that appeared against UCLA behind them as they host Arizona State on Friday afternoon.

USC to lead the pack with defense

Hanfmann named Player of the Week
Scroll to top