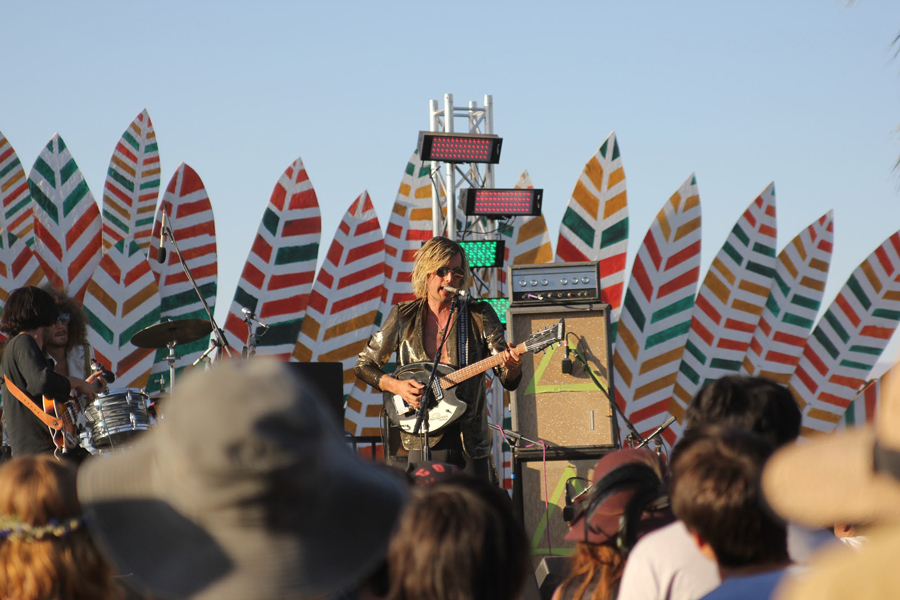 The recent warm weather, sunshine and thoughts of summer signal the end of the school year and the beginning of festival season. The Coachella Valley Music and Arts Festival has already come and gone and Outside Lands isn’t until August; anyone looking to experience great music on a beautiful spring day should check out the Desert Daze music festival on April 26. Sponsored by Moon Block Party, the festival boasts bands such as Blonde Redhead, The Raveonettes, Autolux and Mystic Braves. The event will take place at Sunset Ranch Oasis in Mecca, Calif., where  two main stages will alternate hosting acts, so concertgoers do not miss out on any music. The music won’t be the only draw, however. A variety of bars and food trucks will be available to attendees, and visual artists will also display work at the festival. Overnight camping will be available so concertgoers can remain in the festival mindset and not have to worry about getting home safely.

Phil Pirrone, the event’s curator and a member of Moon Block Party said, the festival’s majestic setting sets it far apart from the typical festival.

“The land completely dictates what the festival will be like. Sunset Ranch is a paradise between a couple different mountain ranges so there’s history there,” Pirrone said. “When you go there, it’s different than being in L.A. The air feels different, there’s less racket in the air. If you get there around 6:45 p.m. or 7 p.m., you’ll really appreciate the scenery; it’s called Sunset Ranch for a reason.”

With over 100 returning staff members, Desert Daze is set to be one of Moon Block Party’s biggest events. Pirrone said that since half of the festival’s staff are musicians, they have a unique perspective that goes into planning and running the festival.

Pirrone said the Desert Daze lineup boasts an interesting mix of established and up-and-coming bands, which was the organizers’ goal.

When curating the lineup, Pirrone and other members of Moon Block Party collaborate to build a cohesive group of acts. After each person makes a list of bands he or she wants to feature, the group meets to create the lineup. Though the main goal is to choose bands that complement each other and create an invigorating musical environment, the festival’s curators also want to provide a platform for lesser-known bands to receive recognition.

“More than half of this lineup [consists of] new and up-and-coming bands, so we put them on where people can see and hear them,” Pirrone said. “These are bands that we really believe in, giving those bands a little push.”

Enter Mystic Braves, one of these rising bands. Relatively new to the L.A. music scene, Mystic Braves is composed of Julian Ducatenzeiler (guitar and vocals), Tony Malacara (bass and vocals), Shane Stotsenberg (guitar and vocals), Cameron Gartung (drums) and Ignacio Gonzalez (keyboard). Inspired by 1960s psychedelic grunge music, the group draws inspiration from some of the members’ favorite bands such as Temples and The Beatles.

Though Mystic Braves is a relatively new band, they have experience playing Moon Block Party events. The first band to perform at the inaugural Desert Daze, Mystic Braves also graced the stage last year. After touring with Moon Block Party in Seattle, Washington and Austin, Texas, it seemed natural for the band to participate in this year’s festival.

“It’s going to be a magical time. I’m excited to see a bunch of my friends playing in front of larger crowds, and the headliners will be awesome to see,” Ducatenzeiler said. “Camping is always fun, so to be able to have that with the music will be fun. Later, we have our record release show, and we’re leaving for our national tour.”

“On the first album we just had a lot of songs that we demoed on Garage Band, so we basically just had to pick 12 songs out of 20,” Ducatenzeiler said. “I think about everything like the themes, key, flow, tempo or whatnot, and then we record it, mix it, master it and send it off to the vinyl company.”

General admission tickets to Desert Daze are $45 and overnight camping passes are $65 for General Admission and camping. Guests can purchase tickets at http://moonblockparty.org/tickets.