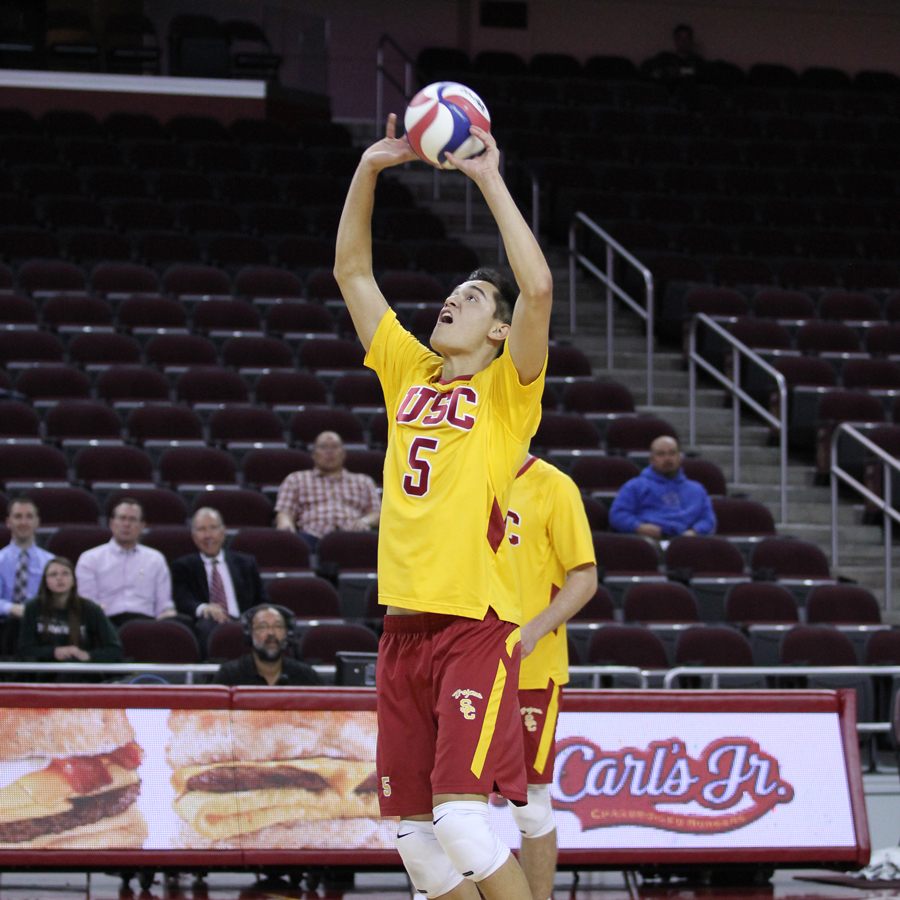 Setting the standard · Junior setter Micah Christenson was named a first-team All-American by the AVCA on Thursday. The Honolulu native led the team with 26 service aces and 1,046 assists this season. – Nick Entin | Daily Trojan

Christenson turned in a tremendous season for the Trojans. In 24 starts, the setter had 1,046 assists and posted an 11.62 assist per set average, which led the nation. Christenson was also second on the team in digs, recording 210 on the season. This is the Honolulu native’s second All-America honor, having made Volleyball Magazine’s second team last season. The 6-foot-6 captain of the Trojans also played on the United States Men’s National Team in international competition in 2013.

Christenson’s fellow Honolulu native Cassiday led the Trojans in digs this season with 297, posting a 2.97 dig per set average and providing a significant presence as a libero for the Trojans. Cassiday set a USC record this season with 17 matches with double-digit digs. This is the second All-America second team selection for the Punahou School graduate. Cassiday missed nine starts recovering from hip surgery in 2012, but came back strong and finished out the season as one of the best liberos in the nation.

San Clemente, Calif. native Lucas Yoder made a huge splash in his freshman campaign for USC. The outside hitter led the team in kills with 394 in 26 starts this season. He also posted an exceptional 4.02 kill per set average and was a huge part of the Trojans’ vaunted offensive attack in their 16-11 campaign.

Yoder and his cousin, redshirt junior outside hitter Paul Yoder, are part of a rather extensive dynasty of USC volleyball players. Lucas Yoder’s father, the late Dave Yoder, was a four-year starting outside hitter at USC. Yoder’s uncle, Bob Yoder, was a 1977 All-American who was also a  USC men’s volleyball head coach from 1982 to 1989.

Christenson, Cassiday and Yoder will be honored at the NCAA Men’s Volleyball Championship Banquet on April 30 at the site of the national championship tournament, Loyola University Chicago in Chicago.