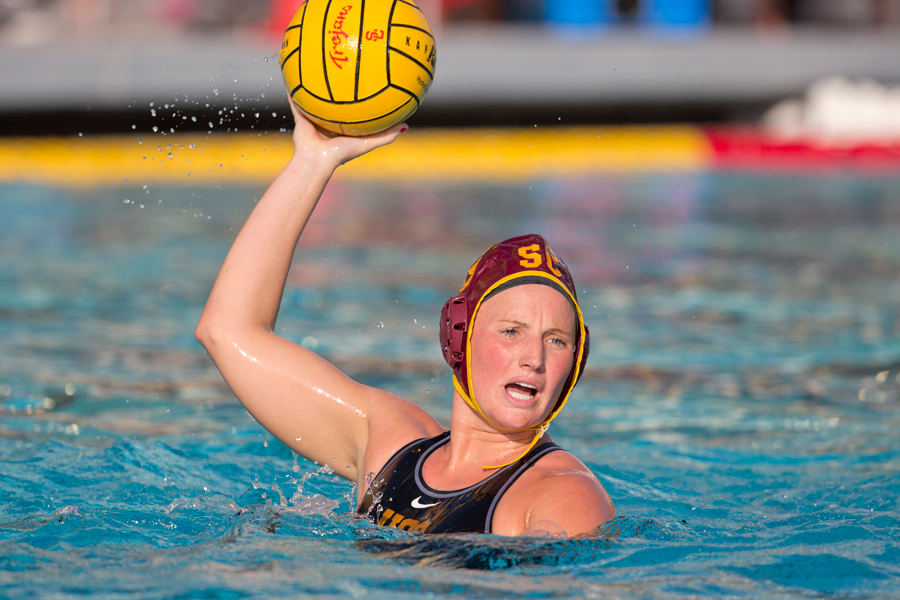 With 24 regular season games in the books, it’s time for the No. 3 USC women’s water polo team to gear up for postseason play. Entering as the tournament’s third seed, the Women of Troy (22-2, 5-2) play host to the Mountain Pacific Sports Federation tournament this weekend at the Uytengsu Aquatics Center. In the first round of tournament play, the Cardinal and Gold will square off with sixth-seeded Arizona State (14-8, 2-4) this afternoon. In the first two meetings with the Sun Devils, USC emerged victorious both times, outscoring its opponents from the desert 25-10 in total.

“We’re feeling good. We’re excited,” said senior two-meter and co-captain Kaleigh Gilchrist. “We’ve got some big games coming up, so it’s always exciting to see how we do. We need to start off Friday against ASU, so we’re looking forward to that.”

In the most recent meeting between the two squads, both junior driver Monica Vavic and freshman driver Stephania Haralabidis led nine USC scorers with a pair of hat tricks. Senior goalie Flora Bolonyai registered seven saves in the victory.

Bolonyai enters the weekend tied with Bernice Orwig for most saves in USC program history with 838. The Hungarian has been the Women of Troy’s starting goaltender for the past four years under head coach Jovan Vavic.

Should USC claim a third win over ASU, the team will advance to the semifinal round Saturday against the winner of a No. 2 UCLA and CSU Bakersfield first round matchup.

In two meetings with CSU Bakersfield earlier in the season, the Women of Troy displayed their offensive dominance in capturing the wins.

In the first meeting, the team demolished the Roadrunners by a 21-1 score. Time did not change much for CSU’s fate, as the two squads met again with USC claiming an impressive 22-7 victory.

Unfortunately for the Women of Troy, their season series with the Bruins has not been as easy.

When the two teams met for the first time earlier this season, USC was able to claim the UCI Invitational crown in a 7-6 overtime thriller. Junior two-meter Eike Daube played hero in the late-February match, recording the Women of Troy’s only two goals in the extra period to solidify the win.

In last week’s regular season finale against the Bruins, the Cardinal and Gold were held to a season-low four goals en route to their lone home loss this year, dropping the game 6-4.

“It’s postseason,” Gilchrist said. “You only have three weeks of the season left and this is for the seeding in the NCAAs. We want to have some revenge on the teams we lost to earlier in the season so it will be interesting. It will be a lot of fun, too.”

USC could potentially face No. 1 Stanford in the finals for the second straight year. Last year, the Women of Troy captured the program’s third MPSF title with an 11-7 victory over the top-seeded Cardinal. Just like last season, USC will be looking to avenge a regular-season loss during the matchup.

In the season’s lone meeting between the two teams, the Cardinal snapped the Women of Troy’s 27-game winning streak in a 9-5 upset in Palo Alto, Calif. Senior two-meter Colleen O’Donnell recorded a team-high two goals in the defeat.

“The game that happened earlier in the season was the first game against Stanford,” Daube said. “We came in with an open mind and didn’t really know what to expect. I think we are going to be a lot more prepared this time, and as the season goes on everyone gets better, so I think that it will be a good game no matter what.”

USC will put months of exhausting training, tiring practices and gruesome battles on the line this weekend. The Women of Troy begin their postseason campaign today against Arizona State at Uytengsu Aquatic Center at 12:30 p.m.