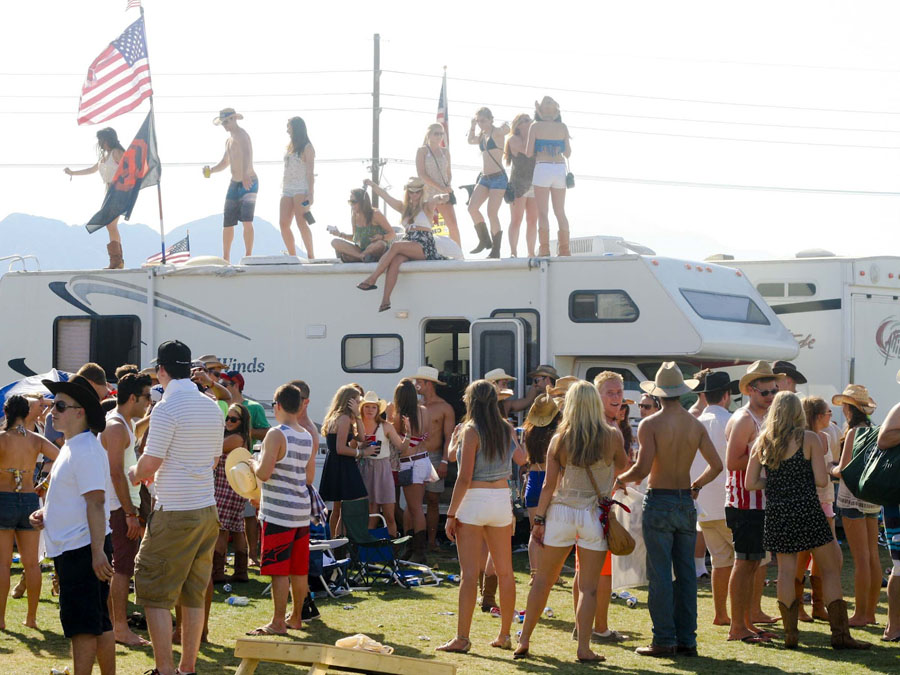 “Red, White and Luke Bryan’s Butt,” read a bold tank top of a 20-something-year-old festivalgoer at Stagecoach, the three-day country music festival in Indio, Calif. Though the woman, who paired the shirt with cut-off shorts and cowboy boots with a bandana wrapped around the heel, might have just been expressing her appreciation for Bryan, the closing artist for the final night of the festival, the shirt seemed to set the mood for the eighth annual event put on by Goldenvoice. Yes, many fans were there to appreciate the, ahem, assets of the stacked artist lineup. But more than that, it seemed the phrase represented the newer demographic of country music fans that predominated the sold-out Stagecoach crowd this year — still interested in the mainstays of the genre (God, country and beer), but also younger in age, and seemingly more open to the cross-pollination of the genre that has widened the fanbase beyond the quote-unquote flyover states.

“[Country music’s] been everywhere,” said Brigit Cooper, who traveled from San Diego to attend the festival. “It’s more pop and mainstream now then it was in the Hank Williams age. The songwriters are coming up, people are relating to their music, their writing … and the variety, it’s always changing, there’s always new stuff.”

Indeed, more than anything, this year’s Stagecoach was notable for the diversity of its artists, if not necessarily its audience. While headliners such as Eric Church, Jason Aldean and Luke Bryan dominated the Mane stage at night, the Palomino and Mustang stages featured a mix of up-and-comers, and traditional country music icons.

Emily Lopez, who traveled from Fresno with a friend to Stagecoach, said she felt this year showcased the fast rise of new artists in country music.

“A lot of artists got big really fast.” she said. “They just came on the scene really quickly, like Florida Georgia Line [on Sunday]. No one knew who they were and then they just blew up.”

Laurie Johnson, who lives in Orange County, said she noticed the rise in female singer-songwriters at Stagecoach this year. From Holly Williams, the granddaughter of Country music legend Hank Williams, who sang hits off of her latest album On the Highway, to The Voice’s Danielle Bradbery, who mixed it up by performing a Katy Perry song during her set, there was a strong representation of female artists.

“Females have really come [out] on top,” Johnson said. “In my time frame, it was really all guys, it was basically all men: George Strait, Willie Nelson, and now, you know, you have [artists like] Crystal Gayle who played [on Saturday]. Oh my gosh … I didn’t think anything was going to be able to top the Country Music Awards that I went to in Vegas, but this tops it by mountains.”

For Lopez, some of the major names stood out the most to her during the festival.

“Hunter Hayes was so good; Eric Church was great,” she said, adding that both musicians sing about a lot of topics that she can empathize with.

“I like how country music is so real,” Lopez said. “It touches all kinds of lives, it’s relatable.”

Relatability might be the key word to understanding the appeal of country music among newer fans. Stagecoach, after all, is not in Nashville, Tenn., and there was a clear SoCal flair apparent among attendees: Brandy Melville festival dresses and stylish boots were popular among girls; Los Angeles Kings caps and cowboy hats (some made out of $35 beer boxes sold at the festival) with open T-shirts and jeans seemed to be the outfit of choice for guys.

Artists and fans alike seemed to embrace the buzzwords of the country genre all weekend, talking about back roads, double-wide trailers and fishing. Though it is doubtful that many of the people in the audience ever personally experienced those scenes, it didn’t matter. They were still able to find their own truths embedded in the songs.

As Johnson said, it’s storytelling. Previously a heavy metal fan, Johnson said she jumped genres when she first really sat down and listened to country music.

Many fans had similar sentiments. Taylor Brown, who drove from Huntington Beach, Calif. to attend the festival, said she thought she hated country music until five years ago.

So that might be why, despite technical difficulties on Friday night, Church won the crowd over with his latest hit, “Give Me Back My Hometown.” The lyrics, which could be about Anytown, USA (“These sleepy streetlights on every sidewalk side street / Shed a light on everything that used to be”), might not have been penned with California in mind, but there was something to latch onto in the words, and the audience sang along late into the night.

And when Bryan took the stage Sunday and delivered an intimate performance of “Drink a Beer,” the crowd sang it back to him even louder.

Around them, the palm trees were lit red, white and blue. Fans new and old raised their glasses into the desert night and sang the words back: “So long my friend / Until we meet again / I’ll remember you / And all the times that we used to sit right here on the edge of this pier / And watch the sunset disappear.”

Then, rather than get into their cars to get a jump on the traffic, most people stayed right where they were until the end of his set. They were with it to the end, from songs off his latest album, Crash My Party, to his take on hits by Jason Derulo and Macklemore, singing along with the country, the pop and the rap — happy to dance and, to quote Bryan, “drink a beer.”