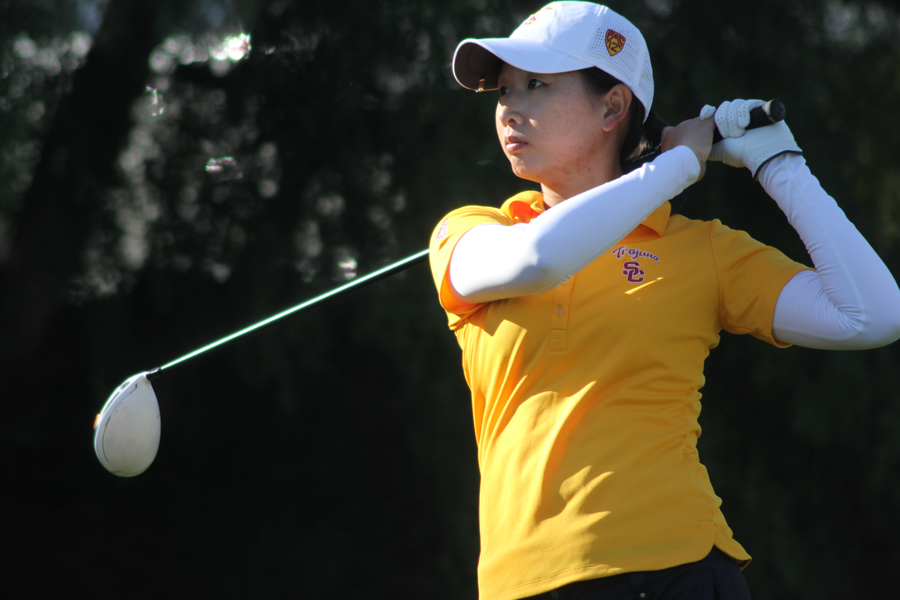 Lead the pack · Junior Doris Chen led USC women’s golf in the Pac-12 Tournament, shooting a 1-under par, which earned her third place on the individual leaderboard. The top-ranked Women of Troy finished second. – Courtesy of USC Sports Information

USC’s fourth-ranked player, junior Doris Chen, led the team with a 1-under par performance, placing her in third overall for the tournament. She was followed by sophomores Kyung Kim and Annie Park, who tied for seventh at 2-over par. The team was rounded out by freshman Karen Chung and senior Sophia Popov who finished 29th and 39th, respectively, for the tournament.

Though the USC women had won three of the past six conference tournaments, this year’s 6-over 870 (294-284-292) placed the Women of Troy just out of reach of the conference title.

The Women of Troy came close to forcing a playoff during Sunday’s final round. The team began play roughly one hour ahead of Arizona, Stanford and UCLA, all teams holding a lead over USC. Unfortunately, the team’s 6-over par performance couldn’t quite top that of the Stanford Cardinal.

“I believe any time you lose by a shot, it fuels the fire to prepare for the next tournament,” said USC women’s head coach Andrea Gaston. “Each of our players knows where [she] can make up a stroke, and it’s important to learn from each event.”

The USC men’s golf team, ranked No. 21 in the nation, placed fifth this weekend at the men’s Pac-12 Tournament, which was held at the Gallery Golf Course in Marana, Ariz.

The No. 10-ranked Washington men grabbed the second place trophy at 13-over par, followed by No. 4 California at 27-over par. Unranked Colorado finished fourth at 39-over par, just four strokes ahead of the Trojans.

For the USC men’s team, junior Eric Sugimoto, the team’s fourth-ranked player, finished tied for fourth place in the tournament  after posting a 68 in the final round. Junior Paul Smith followed Sugimoto’s strong performance by tying for ninth overall and senior Jeffrey Kang finished in 31st place. Recently announced Pac-12 Freshman of the Year Rico Hoey tied for 45th place, struggling to a 16-over par finish (78-72-78-73).

Just like the Women of Troy, the USC men’s golf team must look past its fifth-place performance this past weekend to prepare for the men’s NCAA Regionals.

Men’s golf head coach Chris Zambri understands that this fifth-place finish does not represent his team’s potential and he is very optimistic about their final tournaments this season.

“Finishing fifth was not our goal,” Zambri said. “We wanted to win the tournament.  However, the two most important tournaments of the year lay ahead of us. Having Eric [Sugimoto] and Paul [Smith] play the way they did shows me that as a group we can be great. The other three in our top five have had exceptional performances in other events and now Eric and Paul have also.”

As head coaches Gaston and Zambri have indicated, their respective teams still have the biggest competitions remaining on their schedule. Teams filled with individual talent, the men’s and women’s golf teams prepare themselves for long seasons in order to adapt and learn from both great and disappointing tournaments.

Zambri speaks for both golf programs when he talks about the opportunity awaiting the Trojan golfers in the upcoming weeks.

“We can make this a magical season if these five great players play well at the same time in the coming NCAA Regional and NCAA Final,” Zambri said. “I think they will.”