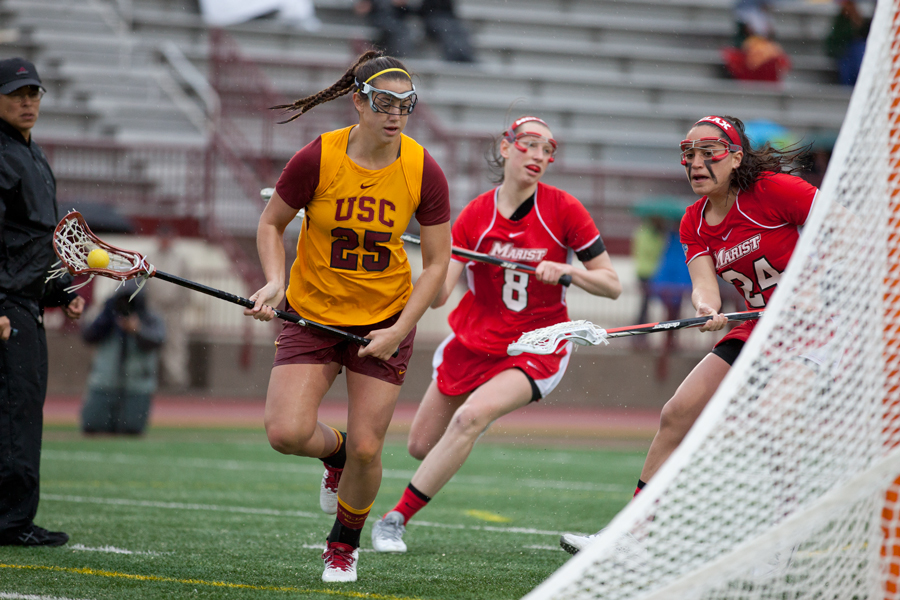 Last season, the team introduced the sport to USC, and went 8-10 in its inaugural season, including a 5-3 mark in Mountain Pacific Sports Federation play. Just last weekend, the team played the first-ever lacrosse game at the famous Wrigley Field, home to the Chicago Cubs.

This week, the Women of Troy (9-8, 6-3) will attempt to achieve another first by advancing into the finals of the MPSF Tournament.

On Thursday, fifth-seeded USC will face fourth-seeded Oregon in the quarterfinals of the MPSF Tournament in Denver.

The Women of Troy come into the matchup having just rounded out their regular season on a Midwest road trip, traveling first to Chicago to take on No. 5 Northwestern, and then to Milwaukee, Wisc., where they faced Marquette.

Against Northwestern, the alma mater of USC head coach Lindsey Munday, USC hung tough in the first half, but couldn’t keep up in the second, and eventually fell 12-7 to the Wildcats.

The Women of Troy got back on track with a win against the Marquette Eagles behind a six-goal effort from sophomore attacker Caroline de Lyra. De Lyra also picked up three assists as USC pulled off an 11-5 victory to end the regular season.

Munday says the road trip was a great way for the team to shape up for the conference tournament.

“I think this last weekend was perfect for us,” Munday said. “We had a great opponent in Northwestern and a huge venue at Wrigley Field. There were 5,000 people there, which generally doesn’t happen for lacrosse home games. It was a big pressure situation, and I think we had some nerves with it, but I’m excited that we got it out against Northwestern, so that in the conference tournament — another big event — we’ll have that experience.”

The team now sets its sights on the Ducks (10-7, 6-3), who are looking to bounce back from two consecutive losses to finish their regular season. Last Friday, Oregon fell to Denver, the top team in the MPSF, by an 11-5 score. On Saturday, the Ducks were edged out 10-9 in overtime by Colorado, who tied Oregon and USC for third in the final conference standings.

Oregon’s Nikki Puszcz leads the team in goals scored, averaging 2.18 per game. Midfielder Carly O’Connell and attacker Shannon Propst each average 1.59 goals per game for the Ducks, and Propst has added a team-high 2.41 assists per game. Goalie Caroline Federighi averages 5.65 saves per game, with a .432 save percentage.

USC will undoubtedly be looking for revenge in Thursday’s matchup, as the Women of Troy fell to the Ducks at home just a week and a half ago on April 18. In the 10-8 loss, 21 turnovers doomed the Women of Troy, and a hat trick from freshman attacker Annie Ruland couldn’t save the day.

“I think it was a fluke that we lost,” said senior midfielder Ceilidh Meagher. “To be honest, they play hard and they never give up. That’s something that is a trait of their team and we have to be ready for that.”

The Women of Troy will bring some momentum into the match, as sophomore defender Courtney Tarleton was just named MPSF Defensive Player of the Week. Tarleton notched eight ground balls again Northwestern and two against Marquette, putting her in second place on the team with 31 ground balls on the season. She also leads the team in caused turnovers, with 19 on the season. The team’s co-captain, who hails from Ridgewood, N.J., became the second-straight USC player to win the award, following sophomore goalie Liz Shaeffer’s award last week.

The winner of Thursday’s quarterfinal battle will advance to face top-seeded host Denver (16-1, 9-0), which will surely be a difficult task. The Pioneers’ Jill Remenapp leads the nation in assists, with 2.71 per game, and goalie Hanna Hook leads the MPSF in goals-against average (7.38) and save percentage (.534).

Despite Denver’s spotless conference record and standout players, the Women of Troy are keeping an optimistic mindset.

“I know that we have so much potential,” Meagher said. “It’s just a matter of putting it all together and playing a little but older than we actually are and just having the maturity to manage our games well and just understand that there’s a lot on the line.”

In addition to the team’s potential, USC has reason to be optimistic because when the team faced off against Denver earlier this season, the Pioneers barely eked out an 8-7 victory. USC held a lead at two points during the game, but two goals apiece by Moore and freshman attacker Michaela Michael weren’t quite enough to pull off the upset.

The Pioneers have escaped with one-goal victories five times this season, and the Women of Troy might be poised to finally hand the team its second loss of the season.

But first, USC has to focus on Oregon.

“In your conference tournament, it’s survive in advance,” Munday said. “So if you don’t win on Thursday, then you’re not playing Denver — you’re not playing on Friday. So I think our girls are very aware of that. We’re not looking past Oregon, they’re a great team, we lost to them the first time out, so we have to be focused on that.”

The Women of Troy take on the Ducks Thursday, May 1 at Denver’s Peter Barton Stadium at 7 p.m. MST.