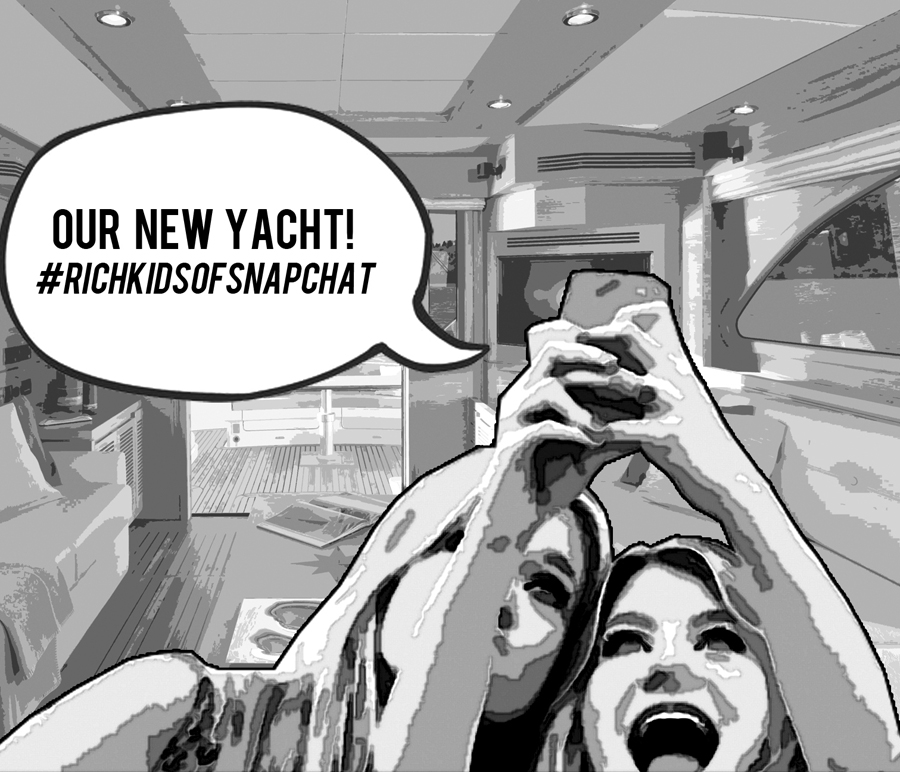 Driving Lamborghinis, poppin’ bottles, raining cash, showing off new Rolex watches and taking extravagant and exotic trips via private jets, “Rich Kids of Snapchat” has been gaining high publicity in the past few weeks by posting obnoxious snaps on Facebook. As of this morning, the Facebook group has reached more than 23K “likes,” and the number is only rapidly increasing. “Rich Kids” has a Snapchat account, RichKidSnap, that regularly updates “stories” and occasionally sends out snaps to individuals, while the Facebook account highlights the popular Snapchat stories to attract more likes and followers. The operator of the Rich Kids accounts claims on the Facebook page that they are “living the frat life” and that they are currently in Los Angeles. Yesterday, Rich Kids of Snapchat sent out a message on Snapchat, claiming that they’re coming to USC in the fall. Whether it was true or false, we could not be sure. But since president Nikias has recently been working to distance USC from the “University of Spoiled Children” and the party image, this could be a potential black mark for the university.

It seems that recently there’s been a growing trend in the entertainment world in which many social media personalities and reality television shows become popular through publicly displaying their wealth in obnoxious ways. “Rich Kids of Instagram” puts up images of spoiled rich kids showing off their lavish lives on Instagram and Tumblr. “Rich Kids of Beverly Hills” documents five wealthy young people in their 20s, living luxuriously in their material world without having any real problems that people their age normally face. The show seems to be quite a success, as E! is developing a spin-off for Season 2, called “Rich Kids of New York”. Meanwhile, the Kardashians have always been known for showcasing their prodigal lives in their reality show, and last Saturday probably marked the craziest “rich kid” activity we’ve seen, when Kim and Kanye threw a “Kidchella” party for their daughter’s first birthday. As the name suggests, it was Coachella for kids, and they incorporated Coachella events and designs such as stages, face-painting, hair-braiding, tie-dyed wristbands and the iconic Ferris wheel. The most ridiculous part was of course that the one-year-old girl had no idea what was happening and will not remember that day.

What amuses me about this trend is that these “rich kids” constantly receive condescending and negative comments, yet more of them are emerging as a result of growing popularity and publicity. There are countless reviews and commentaries criticizing or mocking these celebrities and social media users, and there are audiences and followers posting negative comments, indicating their frustration and even anger toward these rich personalities. Regardless of their annoyance, however, audiences, followers and the media stay tuned into the lives of these rich kids.

I couldn’t help but wonder about the rationale behind our obsession with spoiled, annoying rich people. Why is it that we hate the way they waste resources and complain about stupid things when there are people in the world suffering from real problems, but at the same time, we find pleasure looking at how absurd these rich people are? I think there are several explanations. Some of us enjoy it because we are jealous of these people, so we find it enticing to live the extravagant life through their experiences. Some of us may be curious to know what rich people do because we want to be one of them. Most of us, however, take pleasure in keeping up with these rich people because it somehow makes us feel better about ourselves. We look at these people who obtain great wealth but appear shallow, stupid and ridiculous, and we secretly feel superior to them because we are supposedly not as materialistic and we are supposedly more cultured. We find comfort in knowing that even if we don’t have the same amount of money, at least we care about more important things and we have better morals. This mentality, however, may just be a hypocritical way to boost our own ego, since if we’re really better than them, why would we need justifications through trashy media? The blowup of this Rich Kids phenomenon is then not only an indication of growing materialism, but also a rise in hypocrisy in society’s standard ethical values.