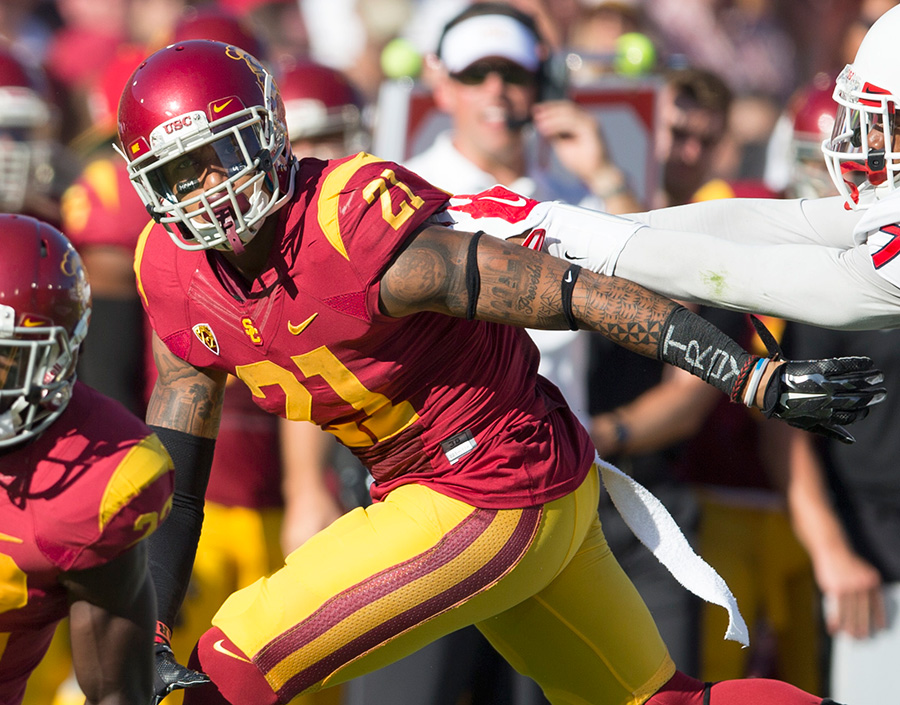 The ninth-ranked Trojan football team suffered its first loss of the season this Saturday, a 37-31 beatdown at the hands of unranked Boston College. Redshirt junior quarterback Cody Kessler finished the game 31-for-41 for 317 yards and four touchdowns, but USC’s inability to run the ball or stop the Eagles’ own dynamic rushing attack left the Trojans looking for answers as the Eagles’ faithful flooded the field after the game.

“[Boston College] controlled the line of scrimmage on both sides of the ball, and the end result was we didn’t get it done,” USC head coach Steve Sarkisian said. “We need to improve.”

USC had been preparing for BC quarterback Tyler Murphy all week, but appeared completely caught off guard by his speed. The Trojans allowed him to rack up 202 total rush yards, including a 66-yard scamper with just over three minutes left in the game that sealed the upset for the Eagles.

“He just beat us with his skills,” sophomore safety Su’a Cravens said. “We were anticipating him to run the ball, we knew he liked to scramble. We just didn’t execute. Third downs came up and he was just running all over the field, so we’ve got to take the fall for that.”

Murphy started slowly, though, which allowed the Trojans to jump out to a 10-0 lead.

BC cut into the Trojans’ lead with a four-yard touchdown run by Tyler Rouse, but a missed extra point by kicker Joey Launceford left Trojan fans feeling confident.

Kessler answered with a 51-yard screen to redshirt junior running back Javorius “Buck” Allen to extend the Trojans’ lead, but from then on out, it was all Eagles.

As the clock wound down in the first half, BC’s Sherman Alston ripped off a 54-yard touchdown run to put the Eagles up 20-17 at halftime.

Though the Trojans looked sluggish at times in the first half, fans were anticipating a spark once senior linebacker Hayes Pullard stepped back on the field for the third quarter. Pullard received a targeting penalty in the second half of the game at Stanford and was forced to sit out of the first half of Saturday night’s game.

But despite Pullard’s best efforts, the Eagles continued to manipulate the Trojans’ defense to open up the second half.

“[BC] just went out there and executed the plan,” Pullard said. “We couldn’t just beat them off of raw talent. We have to base our focus on preparation, being able to contain these high-profile quarterbacks. That’s what we’re going to be playing against in the Pac-12, so I would look at this as more of a gain than a loss.”

Though Pullard and the USC defense couldn’t stop the bleeding, the Trojans’ offense was nonexistent. The Eagles sacked Kessler on third down on each of USC’s three drives in the third quarter, forcing the Trojans to punt deep in their own territory every time.

The Trojans’ offensive line finally showed its inexperience, as Kessler was sacked a total of five times in the game.

“[BC’s defense] did a good job getting to me,” Kessler said. “We should have made some better calls on my part and my O-line’s part, it was a combination of both.”

When the Trojans got desperate late in the fourth quarter, Sarkisian called for Kessler to throw the ball more often, and he provided a spark the team had been missing all game. Kessler went 17-for-20 in the fourth, including a touchdown toss to sophomore wide receiver Darreus Rogers with 1:18 left to cut BC’s lead to 37-31.

The bye week comes at a good time for the Trojans, who were outgained 506 to 337 in total yards. USC will have a week off before returning home to host Oregon State, and the squad is ready to get back to the drawing board.

“The loss was hard,” Sarkisian said. “We’ve got a very disappointed locker room, but I really believe we’ll bounce back. We’ll do it in great fashion.”