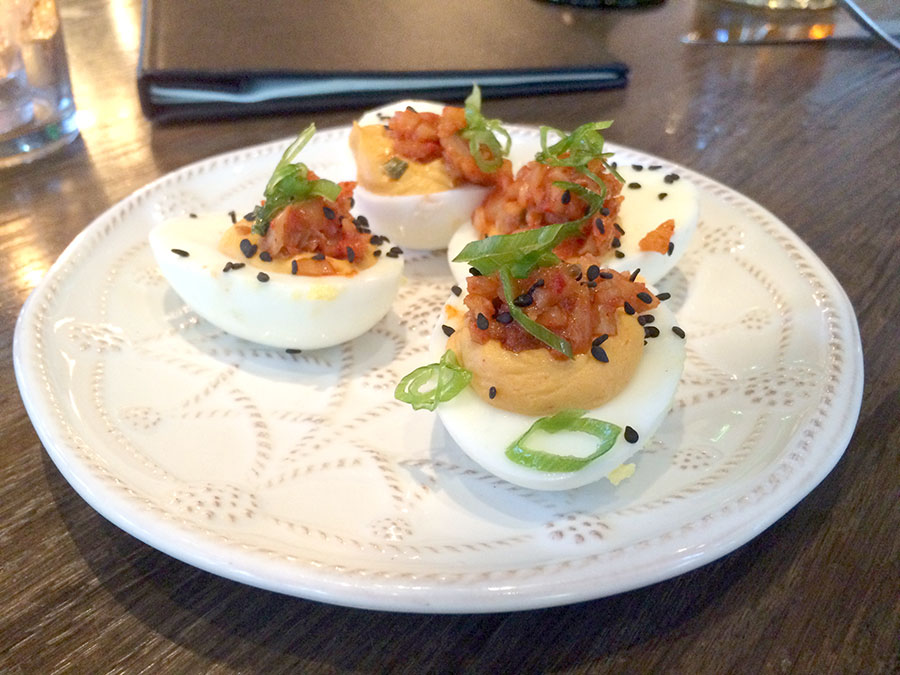 As restaurants in Los Angeles go, few concepts have the vision and ambition to conquer the old Towne Food & Drink space at the foot of the WaterMarke Tower in Downtown. The $4 million restaurant shuttered in March 2013, and it paved the way for the next big restaurateur to make its mark in what is becoming one of the nation’s most demanding (and intriguing) food scenes. Earlier this year, Rob Weakley and David Bernahl, the people behind the L.A. Food & Wine Festival, set out to meet the challenge with their restaurant, Faith & Flower. The first thing to notice upon walking in to Faith & Flower is that the restaurant is gorgeous: The designers at AvroKO eschew the modern (and frankly, tired) industrialist aesthetic favored by every “hip” restaurant in Los Angeles, and opt instead for crisply folded floor-to-ceiling drapery and Art Deco-inspired dimpled leather booths. Planet-like clusters of ornate orb-lighting dominate the lined ceilings, and a tiered chandelier in the main dining room practically drips with Belle Epoque-era opulence. Small touches like a wall appointed with ostrich feathers invoke images of 1920s flappers and walnut woods lend the restaurant an old, opulent feel without falling victim to the stodgy, white tablecloth-draped austerity of outdated steakhouses.

Considering the ambiance of the space, the food and beverage at Faith & Flower has a great deal to live up to. Lead Mixologist Michael Lay’s beverage program answers the call — his English Milk Punch is already a favorite among the cocktail cognoscenti. Those more inclined to the familiar might try the Harry Winston: Lay’s twist on an Old Fashioned uses Japanese blended whiskey, teapot bitters, King’s Ginger and Okinawa black sugar to lend Don Draper’s drink of choice an irresistibly floral nose with a citrusy undercurrent that smells deceptively more like yuzu than the flamed orange peel listed on the menu.

The restaurant’s cocktails are, of course, a predecessor to the food, and with Executive Chef Michael Hung at the reins, Faith & Flower seems to be in good hands. Though Los Angeles Times food critic Jonathan Gold was gently critical of the chef’s execution in a review earlier this summer, Hung seems to have improved his craft and slightly re-tooled the ingredients in his menu.

The servers term Hung’s style as “tapas plus,” or as a slightly larger version of tapas dishes that are meant to be shared. The menu itself draws from an assortment of disparate culinary cultures: vadouvan (curry spice) crème-fraîche finds itself on a bed of crushed potatoes, Korean kimchi mingles with the yolk in a perfect deviled egg and chile verde and carnitas crowns a wood-fired pizza.

For starters and small bites, the Kanpachi Ceviche is an absolute must. Hung’s Kennebec potato chips are at once airy and substantive, holding up nicely against the ginger beer-adulterated Kanpachi and citrus. It’s a whimsical dish that could stand on its own legs as a cocktail snack — just make sure to leave some for the other guests.

Hung, who honed his traditional French skills at San Francisco mainstays Jardinière and the Michelin-starred La Folie, draws from his experiences in his time with Traci Des Jardins for some of his proteins. Hung’s duck confit is aptly executed, with the fork-tender dark meat falling apart like a slow-cooked pork shoulder. The woodsy, autumnal notes are only further accented by the watercress soubise and sweet peaches. At $17 for a portion that could serve as a main course, it’s also a surprising bargain.

In following with the comfort theme, the popular oxtail agnolotti is textbook al dente and served with bone marrow butter. It’s well executed and savory without being unctuous, though it might be a tad too understated. Vegetables are not standard steamed or sautéed affairs; instead, Hung infuses them with flavor to better suit a pairing with the proteins. Broccolini with anchovy salsa, for instance, would pair with the ribeye with vermouth and oyster jus. Sauteed Blue Lake green beans come topped with bay shrimp gremolata to pair them with Faith & Flower’s seafood dishes, which include an exquisite, melting-tender black cod. It would be remiss to neglect mention of the pizzas, which are fantastic. Faith & Flower’s crunchy, chewy wood-fired crust could hold its own against any specialty pizza shop in the city. Overall, it’s hard to miss on a menu like the one at Faith & Flower, where the potential combination of dishes, flavor profiles and experiences is mind-bending.

To help navigate these options is the helpful wait staff. Though they shy away from making outright unqualified recommendations, they are capable and knowledgeable. Food service is controlled back of house, where Hung and his staff determine the best possible pairing of the dishes ordered and bring the dishes out in an order that best complements flavors. Other facets of service can be a bit more workmanlike than necessary — one night, a member of the waitstaff whirls around refilling water with such vigor that water splashes out of the cup back onto the table.

Small misgivings notwithstanding, Faith & Flower seems to have situated comfortably into what it is: one of the largest, most intriguing restaurants in a city that seems to be clamoring for a culinary identity. It is at once nostalgic and disruptively progressive, smart and unpretentious, with a fondness for the well-crafted drink and an appreciation for multiple culinary cultures bouncing off one another, with each finding a way to make the other better. So replacing a $4 million restaurant that could very well become a representative of the city’s food scene is a daunting task — but in Los Angeles, maybe all it really takes is a little faith.