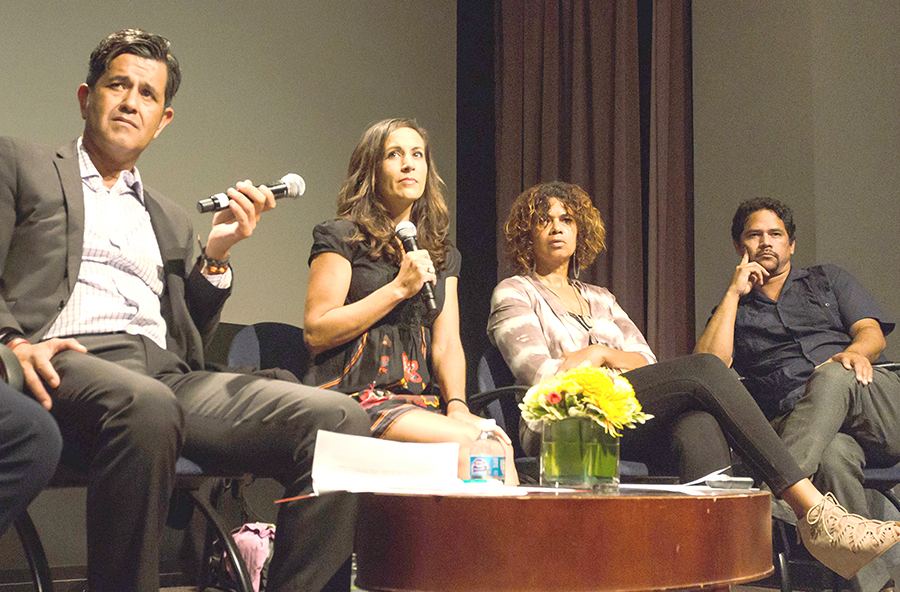 The Annenberg School for Communication and Journalism, in partnership with Visions and Voices, held an event titled “Voices of South L.A.” on Thursday night in Annenberg Auditorium. Coming together · Panelists discussed the importance of USC students engaging with the surrounding community at the Voices of South L.A. event, which took place Thursday evening in the Annenberg Auditorium. – Benjamin Dunn | Daily Trojan

The panel discussion centered on the comprehensive model for change that various activists and USC individuals have tried to implement in and around South Los Angeles to promote economic and social improvement.

Featured in the panel were the voices of Erin Aubry Kaplan, a chronicler of African American life in Los Angeles; Francisco Ortega, policy advisor to the Los Angeles Human Relations Commission; Alberto Retana, executive vice president at Community Coalition; and Sahra Sulaiman, a documentary photographer and researcher for Streetsblog LA.

The panelists have taken significant action around the L.A. community, working to improve the conditions of the neighborhood by creating and working for various initiatives.

“South L.A. needs its people, its community to understand that they have the power,” Ortega said.

Ortega posed a pivotal question to the audience, asking how South Los Angeles can use the power of the people to act as a transformative agent for greater reform. He commented on how difficult it is to achieve change among residents of the neighborhood.

Sulaiman began by stating the importance of communal respect in Los Angeles. She reiterated the lack of empathy among those who try to understand the complexities of the South L.A. residents.

“You have to respect the knowledge of the people in the community — who they are, who they represent and how they’ve been there,” Sulaiman said.

She also spoke about the disconnect within the community, urging students to lay a foundation of trust in order to foster communication between themselves and the surrounding residents.

Kaplan commented on the misconceived notion of perception in the community.

“There is a struggle for both the people who live in the community and those who are not from the community to perceive themselves in a way that can make tangible change,” Kaplan said.

Ortega posed a question to the audience which transitioned the focus of reform in South Los Angeles to a difference in attitudes.

“Are you looking at this [issue of poverty and injustice in South Los Angeles] as disparity or equity?” Ortega asked. “Disparity just means there is difference.”

He also said that activism required a greater commitment in order to truly bring about change.

“Are we building a movement or are we just contributing to charity? You must ask yourselves if you are really trying to change the equation,” Ortega said.

Dayna Grundy, a sophomore majoring in human biology, enjoyed how the event focused on community interaction.

“It was a great place where a community of students and advocates came together to discuss possible problems and solutions in Los Angeles,” Grundy said.

Ortega commented on the impact the event will hopefully have on USC students.

“Today’s event is important in bridging the South L.A. community with one of its most beloved neighbors, USC,” Ortega said.

Voices of South L.A. is one in a three-part series of events including Food, Recreation and the Arts as Social Justice and the South Los Angeles Walking Tour.

Trojans take on the SoCal Tournament