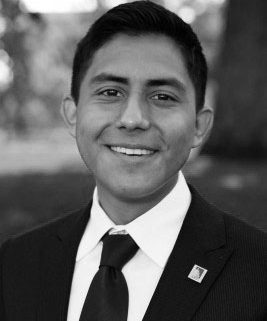 USC alumnus Oscar De Los Santos has never taken education for granted. While his parents are citizens now, they came to the United States as undocumented immigrants, and he said that the stories they told him of lost childhood and immigration motivated him to work hard to get into USC. But he recognizes that many other Chicano, working-class, first-generation college students are not able to do the same. Photo from USC News
Rhode to success · Oscar de los Santos, who graduated from USC in 2015 with a degree in political science, was awarded the Rhodes Scholarship.

“[My parents] gave up their families, friends and everything they knew to go to a country that did not want them, and whose language they did not speak,” Santos wrote in an email to the Daily Trojan. “They made these courageous sacrifices to give their kids a chance at breaking the cycle of intergenerational poverty each of their families had faced in Mexico. I have a responsibility to make this country’s investment in me meaningful for my community.”

Santos, who graduated from USC in 2015 with a bachelor’s degree in political science, was named one of 32 Americans to receive the Rhodes Scholarship, which provides financial support for two to four years of graduate study at Oxford University. Erica McCann, director of USC Academic Honors and Fellowships, said this is no small feat, as the scholarship is recognized as one of the world’s most prestigious postgraduate awards.

“Oscar is USC’s ninth Rhodes Scholar and is among the ranks of other prominent members of the Trojan Family, including Marshall School of Business professor James O’Toole and former USC Athletic Director Pat Haden,” McCann said. “All USC Rhodes Scholars are celebrated on the Wall of Scholars in Leavey Library, a gift from the Skull and Dagger Society.”

All Rhodes Scholar candidates must be endorsed by their universities, and each university has a unique endorsement process, according to McCann. USC does not limit the number of students it can choose to endorse. Applicants submit a number of materials, including application, personal statement, resume and five to eight letters of recommendation for faculty consideration.

While Santos was at USC, he was a member of the USC College Democrats and helped found USC Students for Barack Obama. He was also a member of Sigma Delta Alpha, a multicultural fraternity. Santos graduated from USC as a Truman Scholar, Phi Beta Kappa and with the Order of the Laurel and Palm. Despite these accomplishments, he said that when he was notified that he was selected as a Rhodes Scholar, his first thought was of his larger community.

“I had mixed emotions. I was excited, obviously, but I was also disappointed to find out I was the only Latino Rhodes Scholar this year,” Santos wrote. “I remain disappointed that powerful institutions continue to underestimate and marginalize the talents of people of color.”

Santos explained that he currently sees troubling societal issues and wishes to educate himself in order to have a positive effect on his community.

“The big issues we face today — education inequity, mass deportation, mass incarceration, poverty, hunger — we face them not because we lack solutions or strategies to address them,” Santos wrote. “We face these issues because we lack moral urgency to confront them. So as somebody who wants to become a better advocate and more effective organizer, I want to pursue a degree in public policy while also developing a more thoughtful moral vision that recognizes the dignity and humanity of all people through a degree in Christian ethics.”

Many of Santos’ mentors reacted excitedly to the news. Chris Freeman, a professor of English at the USC Dornsife College of Letters, Arts and Sciences, said that Santos had the potential to create change in the world by pursuing a higher education. Santos was part of Freeman’s “Queer Los Angeles” class, and Freeman remembered Santos as a student who was on “his own level.”

“When you are competing for something of that level, you are against the very best people in the country,” Freeman said. “So for him to have been chosen is just an incredible honor and when he gets to Oxford, he will make a mark. He will make an impression. And he will do USC very proud. That’s for sure.”

McCann said Santos has always aimed to become an agent of change in his community, and that he saw the Rhodes Scholarship as a vehicle for bettering the lives of others.

“When [Santos] inquired about applying for the Rhodes [Scholarship], he was already incredibly accomplished in his own right, [and] we were glad to partner [with] him to highlight [his] achievements,” McCann said. “Throughout [the process], Oscar remained humble and focused on the work he hopes to accomplish for his community. With the Rhodes [Scholarship], he gains an international platform to support his advocacy.”

The Six Billion Dollar Man: How Nikias is engineering the future of USC
Scroll to top