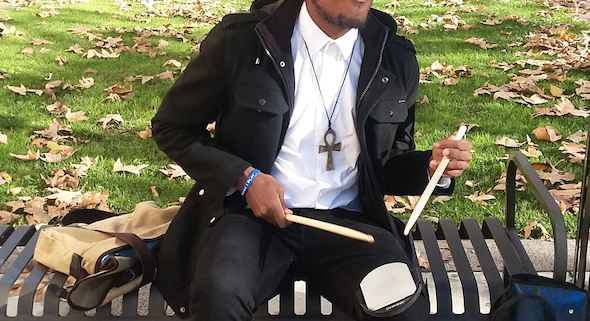 After Victor McElhaney, a jazz drummer and student at the Thornton School of Music, was killed last year near USC, faculty member Peter Erskine remembered something McElhaney’s mother said to him at a Thornton family event in 2017: “Victor wants to change the world.”

“When someone wants to change the world, to make it a better place, most often they don’t get to stick around to see the results … We were determined to try to help him realize that dream,” said Erskine, director of drumset studies at Thornton, who taught McElhaney privately for a year. “Victor did help change the world. He brought about dialogue, he brought about energy within the school of music … so we created this scholarship in his name.”

The Victor McElhaney Memorial Jazz Drumming Endowed Scholarship, announced by Thornton Wednesday, will be awarded to an undergraduate drummer who reflects the spirit and ideals McElhaney represented. The first recipient will be selected by the school’s jazz faculty for the upcoming academic year.

Aaron Serfaty, who privately instructed McElhaney and led the Afro-Latin American Jazz ensemble that McElhaney was in, said McElhaney was extremely passionate and constantly advocated for what he believed in — citing a rehearsal in which McElhaney sparked a two-hour discussion on issues of racial disparities and representation.

”I was very happy, very excited to hear that kind of conversation at USC, because in the 23 years I’ve been there we’ve had pretty much nothing in that line of conversation,” Serfaty said.

Serfaty is not part of the selection committee but said he hopes the recipient will honor McElhaney’s dedication toward social justice, which manifested itself in various corners of his life — from his work fostering a community of Black male leadership as co-director of Brothers Breaking B.R.E.A.D. (Barriers, Regrets, Egos, Animosity and Doubt) to the everyday conversations he sparked in class. Along with his close friend Syann Cromwell, he screened “Moonlight” at Ground Zero and opened up a discussion on identity and breaking down barriers. It was the first installment in a series called “Keep Me Grounded.”

“What I hope and what I would like to see is a student of African American origin that is very active in his or her community and has strong beliefs, just like Victor did,” Serfaty said. “We want activism, we want people determined to help change the world through music, which is what he wanted to do.”

McElhaney, who majored in jazz and drumset studies, was involved in the Center for Black Cultural and Student Affairs, Brothers Breaking B.R.E.A.D. and various student combos. He was also a mentor to young musicians at the Oakland Public Conservatory of Music.

One of the combos McElhaney drummed and occasionally sang for was a rhythm section with solo singers, led by jazz vocalist Kathleen Grace. Grace worked with McElhaney for a year and said he was a “remarkable human.”

“He challenged you on things, but he would always do it out of such a sense of love and interest and enthusiasm. He had a lot of light,” Grace said. “I think Victor can help us all speak up more, and he’s someone I think about when I think about that for myself.”

In March 2019, a month before his 22nd birthday, McElhaney was killed by four people attempting a robbery while he was on his way to an art show. Soon after his death, the scholarship was kickstarted by Erskine, who auctioned off more than 100 signed cymbals from his 45-year collection. He said that all of his cymbals had a story to tell and noted if they were played on recordings or at special events. McElhaney’s classmates helped Erskine video demonstrate and photograph each of the cymbals, which he was then able to auction off online with the help of The Professional Drum Shop in Hollywood.

Other donations came in from Thornton Board of Councilors members, USC members of the Board of Trustees, McElhaney’s classmates and an anonymous donor. Erskine initially thought that the scholarship fund would last for five or 10 years, but once the anonymous donor got on board, the fund was large enough to become endowed. Erskine said McElhaney will be memorialized each year for the rest of Thornton history.

“What it does is attaches his name, his identity, and I think we could say that it attaches his soul to the search for musical discovery and musical truth that students, year after year, generation after generation, will be engaging in,” Erskine said. “He’s going to be very present for as long as we have a jazz studies program at the Thornton School of Music, which I hope will be forever.”

The jazz faculty at Thornton was not the only group of people who wanted to honor McElhaney. This past academic year, the USC Black Alumni Association awarded a scholarship to Thornton master’s student Yafeu Tyhimba in McElhaney’s name. CBCSA also included his image in a new wall mural displayed in the Student Union.

McElhaney was the son of councilmember Lynette Gibson McElhaney and Clarence McElhaney of Oakland. His musical talent was present from an early age when he began drumming before he could even walk or talk, Lynette said according to a past Daily Trojan articleErskine described him as someone who had the touch of a seasoned jazz musician and was musically fearless. His talent was well acknowledged, but above all, as Grace said when reflecting on his memorial service, McElhaney was remembered for his constant actions of love.

“We just need more people like him on this planet,” Serfaty said. “Not just musicians like him — but people.”

Natalie Oganesyan contributed to this report.