We need to rethink calling the cops 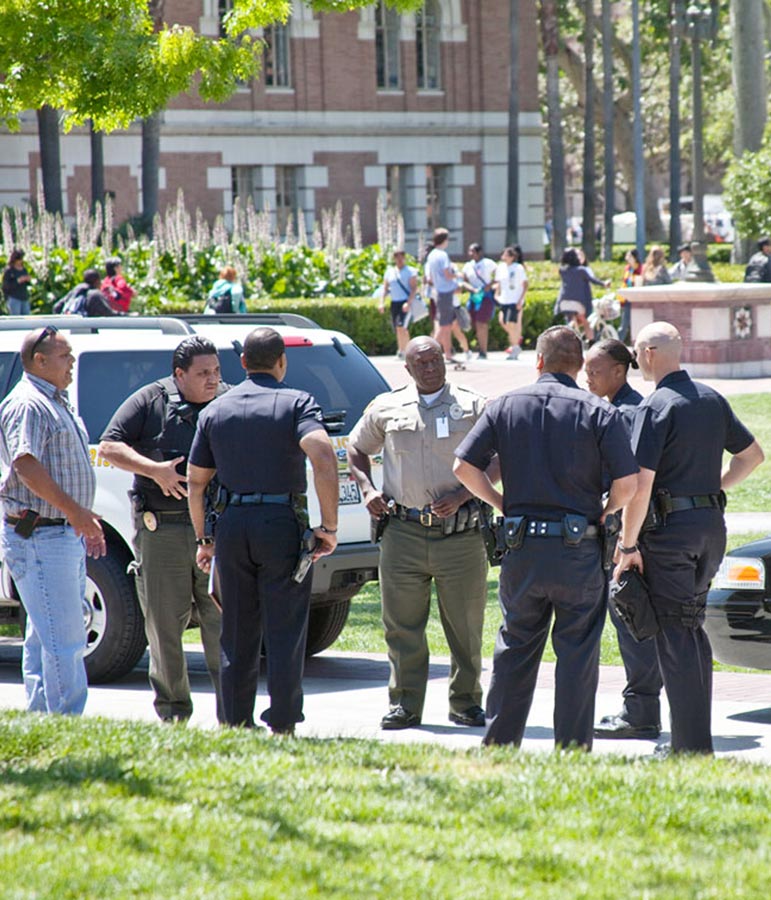 On Aug. 31, Los Angeles County sheriff’s deputies shot Dijon Kizzee for allegedly breaking a bike law. Kizzee’s death has prompted demonstrations throughout L.A. County and tough conversations about the role of the police. Racism in law enforcement has existed in the United States since its inception, and this tragedy is one of the latest in a long string of extrajudicial police killings of Black people.

For too many people of color, getting the police involved is a death sentence. It’s time for civilians to question why they rely on the law enforcement to solve their problems.

Despite bearing the motto “to protect and serve,” law enforcement agents have no legal responsibility to ensure civilian safety. The U.S. Supreme Court found in DeShaney v. Winnebago County Department of Social Services (1989) and Castle Rock v. Gonzales (2005) that the government has no constitutional duty to protect people from harm. The law is clear: Police officers are not bodyguards.

Police officers may not even arrive quickly enough to prevent personal injury. While the Los Angeles Police Department’s average response time is 5.7 minutes, most response times are notoriously variable, dependent on city-specific factors and how life-threatening the situation is. However, most criminal-victim interactions only take 90 seconds.

Moreover, police officers are trained to engage in, not prevent, conflict. A 2016 Department of Justice study of 135,000 police trainees found that 168 out of 840 hours of training were spent on firearms, self-defense and use of force. Mental illness received only 10 hours and issues such as homelessness and substance abuse were often neglected.

Police training also inculcates a siege mentality within officers, teaching them that they are always at risk of attack. Police departments often screen the killing of Kirk Dinkheller, an officer who was killed after hesitating to shoot a suspect, to teach cadets that violence is inevitable. Many also host “warrior-style” training sessions, which prepare officers to kill without any hesitation.

Of course, the vast majority of police officers care deeply about the communities they serve. But when police training and responsibilities do not account for civilian safety, it is clear that police officers are primarily intended to act as agents of violence. It is unreasonable to assume that calling the police will automatically make the situation better.

If anything, police violence may make the situation worse. In 2013, grandmother Carolyn Wade called police to talk down her granddaughter from running away; the officer on duty manhandled Wade’s pregnant daughter and handcuffed her granddaughter. When Wade protested, the officer slammed her head into a wall.

Whether or not these mistakes are common (which they are) is irrelevant — police violence has too much potential to traumatize or even kill innocent people. These risks detract from public safety, defeating the purpose of calling the police.

Even with the best intentions, requesting police involvement has resulted in unnecessary deaths. On Aug. 22, police officers shot and killed parole officer Sandy Guardiola after her colleagues called 911 to request a wellness check. This isn’t an isolated incident — “wellness checks” have been killing Black people since at least 2011.

Wellness check-related police violence disproportionately impacts those experiencing mental health issues. Given the aforementioned lack of mental health training, officers are highly likely to interpret atypical behavior as life-threatening and to respond with extreme prejudice. The result is that at least half of police shootings involve people with mental illness.

Given that police involvement inherently opens the possibility of violence and death, civilians must reevaluate what constitutes a legitimate reason to call 911. Of course, the police should be involved when someone is posing a direct threat to themselves or to others. That being said, it is self-defeating to risk misdirected violence to resolve interpersonal conflict or property loss.

If the situation is not life-threatening, alternative conflict resolution methods will likely be more helpful in reaching a resolution. Short-term solutions include using de-escalation tactics or leaving the situation until emotions cool over. Long-term solutions might include building relationships with neighbors or even investing time and resources into a community mediation group, along with reallocating funding from law enforcement to community resources.

Regardless of the situation at hand, calling the police should be a last, not first, course of action.

REVIEW: ‘Unpregnant’ normalizes abortion through the lens of a female d...
Scroll to top