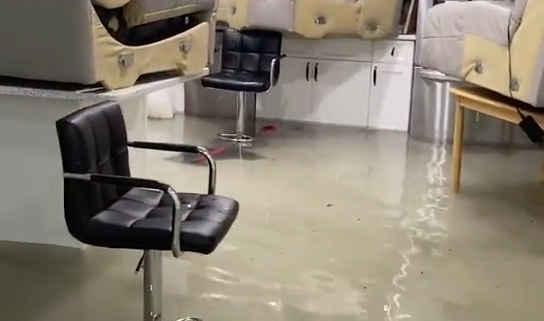 Growing up in Gentilly, New Orleans, Makayla Howard is used to staying home with her family during hurricanes, waiting out the storm with her four siblings, three cats and two dogs and stepping outside occasionally to watch the storm pass through her neighborhood.

Howard’s dad is also a police officer, so, while other families evacuate, her family usually stays home with her pets as her dad patrols the streets.

But when weather services predicted a category four hurricane — Hurricane Ida —  on the 16th anniversary of Hurricane Katrina, this time everyone in Howard’s family aside from her father evacuated, driving 12 hours to Atlanta to stay with her grandparents.

Instead of taking a nearly four-hour flight back to New Orleans, Howard, a resident assistant and junior majoring in fine arts, scrolled through Twitter and called her mom from Los Angeles, asking for updates as Ida moved toward her hometown. Her dad, patrolling the streets of New Orleans and serving on the “frontlines,” sent her photos of families he was helping evacuate and reunite, Howard said.

Colleen Daly, a junior majoring in theatre from near Metairie, New Orleans, said her family evacuated to Alabama then Florida, staying away from home for about two weeks. Throughout their evacuation, Daly’s parents kept her updated on their evacuation and tried to provide updates on the status of her house.

Although Daly’s family did not find flood damage after they returned home Friday — since they safeguarded their home after it flooded during Katrina —  their roof and windows were damaged from the wind and fallen trees.

While many students faced challenges adjusting to the beginning of the semester — balancing school, work and other responsibilities — Howard and Daly dealt with the added stress of worrying about the safety of their families back home.

“It’s been really stressful for everyone,” Howard said. “Since I’m here, it’s been very weird to watch it [happen] but not being able to be there to support in the way that I’m used to doing.”

Scott Weinstein, a freshman majoring in theater whose family lives in a New York City suburb, also said he wished he could have been home to help out his family. While Weinstein’s house was not damaged, his grandmother’s house was flooded, ruining her basement floors, carpets and stove.

Since New York declared a state of emergency and many streets were flooded, Weinstein’s grandmother could not leave her home and found difficulty obtaining help as her basement flooded.

As Ida moved up the east coast, Joyce Jiang, a freshman majoring in health and human sciences from Danville, N.J., just started her first weeks of classes, spending a lot of time in the library and paying little attention to the weather back home.

But, after realizing Ida’s severity, Jiang checked in on her parents. In previous hurricanes, Jiang’s house has flooded, with water levels nearly reaching the second floor. This time, her house avoided serious damage, but her neighbors by the riverfront and cousins in Queens, N.Y. dealt with flooding.

“There was water coming out of every single sewer, like the toilets, the bathtubs, the sinks, and they just had to move like the couches onto the counters and everything like that and it took a while for the water to drain,” Jiang said.

Left without power in their home for about two weeks, Howard’s family stayed in Atlanta for the entirety of that period while her dad worked in New Orleans. Aside from the loss of power, there was no damage to her home.

While her street often floods after “long rains,” her house, which was rebuilt after Katrina, has not flooded in 10 years of her living there, Howard said.

Her cousins, however, came home from evacuating their home to see that a tree had fallen on her roof, caving in the ceiling of a bedroom. Howard’s friends also dealt with damage to their homes and await Federal Emergency Management Agency assistance.

Howard’s younger siblings, one who is in high school and the other two who are in middle school, had just returned to in-person classes when Ida hit. Now,  they don’t know when they will return to the classroom again.

On Sept. 2, USC Campus Support & Intervention emailed students who may have been affected by Hurricane Ida and suggested students reach out to USC Counseling and Mental Health. In a statement to the Daily Trojan, Campus Support and Intervention said it offers services such as counseling, time off from courses and other troubleshooting to students who might have been affected by natural disasters.

While Howard said the resources offered in the email did not seem particularly helpful, she said her mom plans to contact USC about Howard receiving an extension for her financial aid because of the hurricane.

After dealing with the beginning of classes and worrying about her family, Howard said  she is relieved her family is OK and that her home did not receive more damage.

“I also have a lot of things on my plate right now, but that added part of it was very stressful when it was happening,” Howard said. “So, I’m very glad it all worked out because I don’t even know what would happen if anything serious had gone down to our house, so we’re just very lucky that our house is OK.”