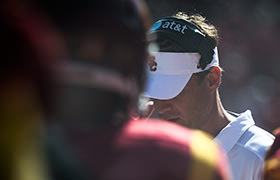 This weekend, USC’s trip to the desert started with a tough loss to Arizona State and snowballed into the firing of former USC head coach Lane Kiffin immediately following the team’s flight back to Los Angeles.

On Saturday night in Tempe, Murphy’s law reigned over the USC football team — anything that could go wrong, did. Arizona State scored 28 points in the third quarter to lock up a 62-41 win and junior wide receiver Marqise Lee was carted off the field with a left knee injury. Then, after the team’s flight back to Los Angeles early Sunday morning — after 12 months of whispers, chants and then near-begging from the Trojan faithful — Athletic Director Pat Haden relieved Kiffin of his duties, in a press release sent at 4:35 a.m. Sunday morning.

When Kiffin was asked if he would be bothered by further questions about his job security following the defeat, he responded, “I’m fine with that. I have been dealing with that for 12 months … We have to find a way to coach better and play better and get our backups ready.”

That much is clear following the latest deflating loss suffered by the Trojans — but Kiffin won’t be the man to oversee that rehabilitation.

Entering Saturday night, USC (3-2, 0-2) hadn’t allowed many points in the third quarter this season. The Sun Devils (3-1, 1-1) made quick work of the Trojans’ halftime adjustments at Sun Devil Stadium, scoring three touchdowns within the first 5:05 of the second half to turn a game that many were expecting to be a defensive battle into a rout. With that scoring streak, the Sun Devils erased USC’s tenuous one-point lead and severely damaged the Trojans’ odds to win the Pac-12 South.

“It was a tough day for Trojans today,” redshirt junior safety Dion Bailey said. “People were just blowing assignments and doing the wrong things … It was just the perfect storm for us.”

The Sun Devils’ 62 points were just one shy of besting USC’s school record for points allowed, matching the record of 62 points Oregon compiled against the Trojans last year.

It was a stunning turnaround after USC only allowed 44 points combined in its first four games.

“I don’t think anyone thought there’d be 100 points scored with these two defenses,” Kiffin said. “Unfortunately we didn’t play good defense today. We gave up a bunch of explosive plays, a bunch of back-shoulder throws.”

After redshirt sophomore tailback Tre Madden raced for a 24-yard touchdown less than a minute after halftime to give USC a 21-20 lead, the Sun Devils punched in 28 unanswered points in the third quarter.

Tailback D.J. Foster hauled in a 74-yard touchdown pass from quarterback Taylor Kelly to give the Sun Devils the lead at 28-21, and redshirt sophomore Cody Kessler threw an interception on the Trojans’ ensuing drive that was returned 46 yards for a touchdown. After a USC three-and-out, tailback Marion Grice hauled in an 8-yard touchdown reception from Kelly to polish off an insurmountable 48-21 lead going into the final period.

“I think a disastrous third quarter for us was a big part of the game,” Kiffin said. “[Kelly] really threw the ball downfield and made a bunch of plays.”

But the worst news had yet to come — after Lee returned a punt to midfield, the former Heisman candidate stayed down on his back as teammates slowly started to kneel around him in a circle on the field, setting a surreal scene.

After the game, redshirt junior tight end Xavier Grimble said that Lee’s injury was examined and that “whatever he got looked at came back positive,” but USC had no official postgame update on Lee’s status. Kiffin could only say that the injury “obviously didn’t look very good.”

The game was filled with quick strikes on offense as both teams found success stretching the field. Arizona State racked up 612 yards of offense and USC had 542 of their own.

None of the game’s scoring drives took more than 4:20 off the clock. Arizona State scored in two minutes or less on five occasions, and USC did the same three times.

But four turnovers doomed the Trojans, as they could only force one -— an interception by freshman safety Su’a Cravens — in the third quarter that was too little, too late.

“That’s the story of the game — four turnovers,” Grimble said. “Those killed us. We shot ourselves in the foot.”

Kelly executed the Sun Devils’ no-huddle offense to perfection, completing 23-of-34 passes for 351 yards and three touchdowns. He also rushed for 79 yards and was never sacked by USC’s defense, which came in ranked fourth nationally in sacks.

“That’s something we really gotta look at,” senior defensive end Devon Kennard said, “because they did some quick throws and got the ball out, and we gotta find ways to get [to the quarterback] no matter what.”

Kessler finished 20-of-29 for 295 yards with two touchdowns and two interceptions, and was sacked four times.

The Trojans had multiple chances to take the lead before halftime, but two stunning turnovers shifted the scoreboard in Arizona State’s favor.

With the game tied at 14 and just under seven minutes remaining in the first half, Kessler delivered a picture-perfect pass to a wide open Lee on a crossing route over the middle. But Lee inexplicably tipped the ball in the air, setting up Arizona State cornerback Osahon Irabor for a momentum-shifting interception.

The Sun Devils took advantage of the miscue with a 28-yard field goal to make the score 17-14, and USC got the ball back with 4:41 remaining before halftime.

Madden then had his number called three times in a row on the ensuing drive, and broke free on the last carry for 12 yards before fumbling at midfield. Arizona State recovered, and ate up the rest of the clock en route to another field goal to give the Sun Devils a 20-14 lead going into the locker room.

Aside from that miscue, the Trojans’ running back tandem of Madden and redshirt freshman Justin Davis performed well once again. Madden rushed for 128 yards and one touchdown on 20 carries, and Davis gained 122 yards and three touchdowns on just 10 attempts.

But overall, as the Trojans head into their bye week winless in the Pac-12, it’s clear that no aspect of the team is without its flaws.