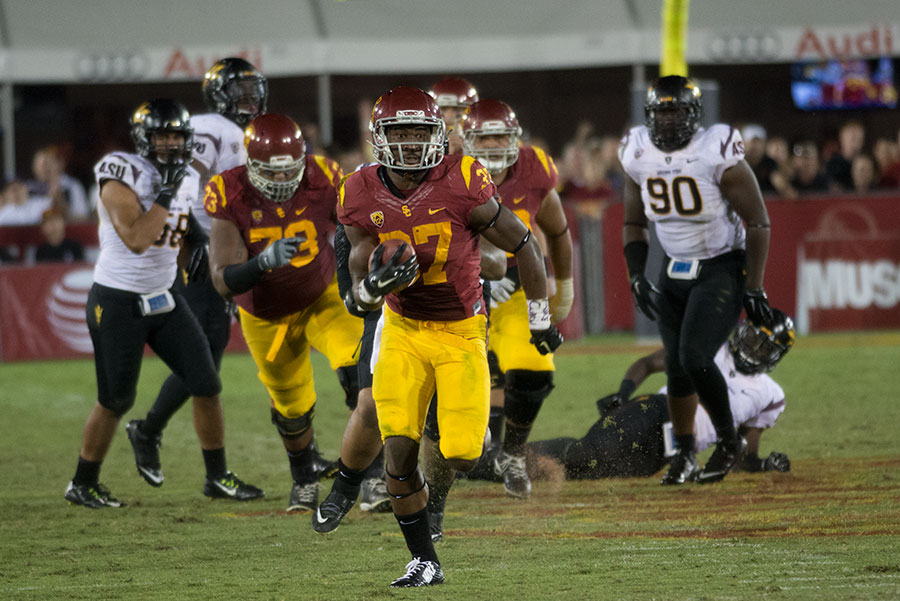 As a result of its 38-34 home loss to now No. 20 Arizona State on Saturday night, the USC football team dropped out of the AP Top 25 Poll. For the second time this season, USC will have to regroup after a tough-to-swallow loss, and they will have to do so quickly as they head back to the feared state of Arizona to take on No. 10 Arizona (5-0, 2-0).

The Wildcats made a historic leap in the polls this week after upsetting then No. 2 Oregon last Thursday, becoming the first team to make the jump from being unranked to the Top 10 since 1989.

Even though the Wildcats have a better record and ranking than the Trojans on paper, USC is still a three-point favorite to win on the road.

Though the Trojans will get back to work on Howard Jones Field on Tuesday, head coach Steve Sarkisian addressed some of the things that went wrong against the Sun Devils and after watching the game film, he continued to express his dismay.

“Quite honestly, it doesn’t get any better,” Sarkisian said. “We missed a lot of opportunities. It’s easy to see the drops. Cody [Kessler] would like to have [some passes] back.”

In the days following the game, many questions surrounded the last play formation and play call by the coaching staff with seven seconds remaining, which eventually resulted in the 46-yard, game-winning Hail Mary.

Sarkisian revealed that the coaching staff had called one defense initially, but switched the play call during a delay. Despite the confusion when changing formations, the coaching staff confirmed that USC players still adjusted into their correct positions.

Sarkisian also said that sophomore safety Leon McQuay III was tasked as the “jumper” to bat down the ball on the Hail Mary, but ended up running into senior linebacker Hayes Pullard and no play on the ball was made.

As much as the Trojan faithful wants to blame the loss on the last play of the game, the 73-yard catch and run touchdown by ASU’s Cameron Smith that made it 34-32 USC with 2:43 remaining cannot be forgotten.

This big play immediately followed a 53-yard rushing touchdown by redshirt junior tailback Javorius “Buck” Allen that sent a majority of USC fans, who believed the game was no longer in doubt, to the exits.

“The biggest thing we need to learn from this is that the game is never over until there are zeros on the clock,” Sarkisian said.

A lot of criticism was also geared towards Sarkisian in regard to his special teams strategy.

Redshirt junior quarterback Cody Kessler, who is not designated on the team’s punting depth chart, “pooch punted” the majority (four of six times) of the team’s fourth-down calls.

It remains unknown whether or not Kessler had practiced punting in practice, but he did punt in high school.

“He did a good job,” Sarkisian said.

The reason for Kessler’s increased role at punter was at least partially due to the absence of starting sophomore long snapper Zach Smith, who suffered a concussion against Oregon State and was not cleared to play in time for the game.

Sarkisian and the Trojans will try to learn from their mistakes as they gear up to take on an Arizona team with a lot of momentum in a crucial Pac-12 tilt.

USC’s showdown against the Wildcats will kick off at 7:30 p.m. and be nationally televised on ESPN 2.

ASU loss comes down to Wilcox
Scroll to top