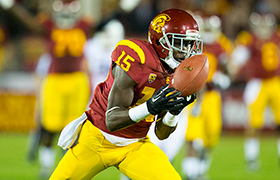 It was a night of firsts for USC at the Los Angeles Memorial Coliseum on Thursday—the first Thursday night home game in the BCS era, the first game under interim head coach Ed Orgeron and, more importantly for the Trojans, their first conference victory of the season.

The Trojans used an explosive offensive performance and a bend-but-don’t-break defense en route to a 38-31 victory over Arizona. USC led throughout the entire game and appeared rejuvenated in Oregeron’s debut following the firing of former head coach Lane Kiffin. Not letting this slip away · Sophomore wide receiver Nelson Agholor pulled in a 62-yard pass from redshirt sophomore quarterback Cody Kessler to set the tone in Thursday night’s shootout against the Wildcats. – Ralf Cheung | Daily Trojan

Arizona (3-2, 0-2) put a scare into the Trojan faithful by punching in two touchdowns in the fourth quarter to cut the lead to 38-31 with 4:37 remaining, but senior tailback Silas Redd acted as the closer in his season debut.

Redd trucked an Arizona defender on a key third-and-eight conversion to clinch the victory for USC. In the first half, Redd only played on the Trojans’ final drive before halftime, but seemed to get stronger as the game went on and finished with a team-high 80 yards on 19 carries.

“That was an honor,” Redd said of being the featured back at the end of the game. “I’m the old man in the bunch, and I’m just happy those guys believed in me and trusted me to get me in that situation.”

With junior wide receiver Marqise Lee sidelined with a sprained left knee, sophomore wide receiver Nelson Agholor became the Trojans’ primary offensive weapon, and the Tampa, Fla. native did not disappoint. Agholor finished the game with seven catches 161 yards—just one short of his career high– and one score that started the Trojans’ offensive onslaught in the first half.

A 62-yard pass from redshirt sophomore quarterback Cody Kessler to Agholor, who managed to reel in the long bomb with his fingertips, put USC on the scoreboard.

“Nelson is good,” wide receivers coach Tee Martin said. “The thing I like best about him is, when I congratulated him on how he played tonight, the first thing he said is, ‘Time to get back to work.’ That just sums it up for him. He’s a hard worker, and I like everything he does.”

In the days leading up to his first game as interim head coach, Orgeron was adamant that his main goal was for USC players to have fun and play with enthusiasm and energy. Thanks to the Trojans’ fast start and Orgeron’s constant encouragement, the team’s sideline was raucous all night, a stark contrast to Kiffin’s often reserved demeanor.

“It’s about the overall concept that ‘We care about the team,’” Orgeron said. “We tried to give the players a feeling of what it was like here under [former head coach Pete] Carroll. We did some motivational things that I thought were very good. I have to give credit to these players, they really bought it.”

Following Agholor’s touchdown, USC extended its lead with a 63-yard touchdown pass from Kessler to redshirt sophomore running back Tre Madden. Madden made multiple defenders miss on his way to the goal line and continued his strong start to the season. He finished the game with 91 total yards from scrimmage, but left late in the third quarter due to a hamstring injury.

After Arizona cut the lead to 14-3, a blocked punt gave the Trojans the ball at the Wildcats’ 42-yard line. USC went on a five play, 42-yard drive that was capped by an 11-yard touchdown run by freshman running back Justin Davis, who finished the game with 38 yards on nine carries and one touchdown.

The Trojans struck again after a seven play, 58-yard drive capped by a one-yard leap into the end zone by redshirt sophomore running back Javorius “Buck” Allen, the first of his career, giving USC a 28-3 lead.

The Wildcats had success moving the ball throughout the entire game, particularly in the passing attack. Arizona quarterback B.J. Denker, who had struggled throughout the season throwing the ball, finished the game with 28 completions on 44 attempts and set career highs with 363 yards and four touchdowns. Denker had averaged just 111.3 passing yards per game entering Thursday night. His 57-yard touchdown pass in the final minute of the second quarter made the score 28-10 at halftime.

Following a 45-yard field goal by junior kicker Andre Heidari midway through the third quarter, Arizona cut the lead to 31-17 after a 45-yard touchdown strike from Denker to wide receiver Garic Wharton. USC quickly responded with a nine play, 73-yard drive that was finished off by a four-yard touchdown run by Allen, giving the Trojansa 38-17 lead with 14:46 remaining in the game.

After Arizona scored two quick touchdowns, Redd took over on the final drive of the game to shut the door on the Wildcats.

In his first game as playcaller, offensive coordinator Clay Helton pushed all the right buttons for the USC offense. The Trojans finished with 546 total yards, including 249 yards rushing on 45 total carries (5.5 yards per rush). Helton dispersed carries among his stable of talented running backs, with five different tailbacks tallying carries.

The team did manage to somewhat minimize damage from Arizona tailback Ka’Deem Carey, who gained 138 rushing yards on 21 carries but never reached the end zone. Carey led the nation in rushing last season with 1,929 yards.

“[The defense] did a good job, but we need to play better in the second half,” redshirt senior outside linebacker Devon Kennard said. “That’s the second week in a row where we didn’t have the best second half, so we have to address it and fix it, and we will.”

With the victory, USC moves into third place in the Pac-12 South behind Arizona State and UCLA. The Trojans next play on Oct. 19 against Notre Dame in South Bend, Ind.