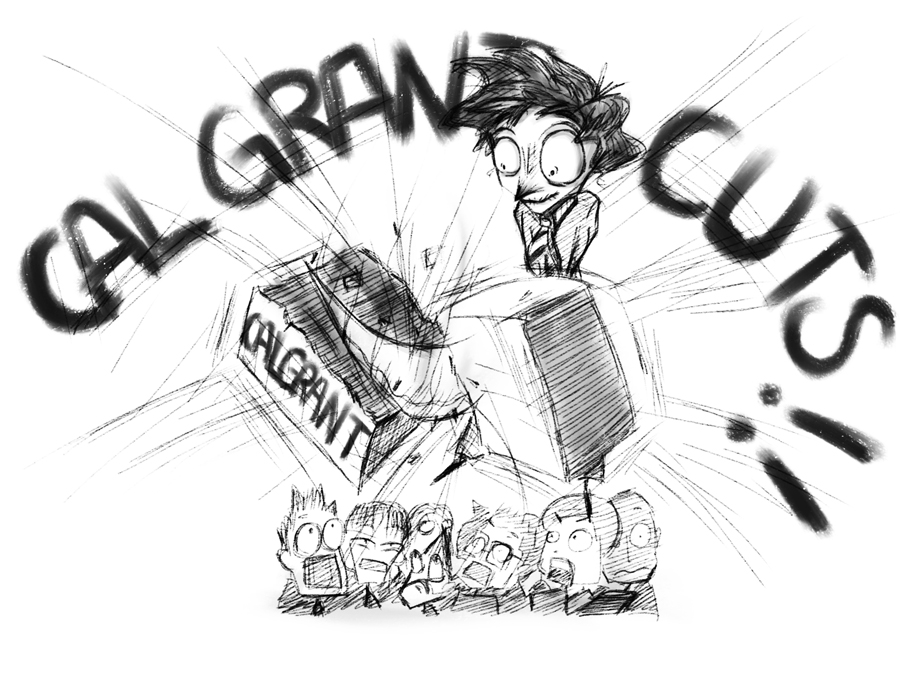 Beginning in fall 2014, students attending private, nonprofit universities in California will see a drastic cut in their financial aid, specifically in the amount they receive in Cal Grants. Cal Grants, which help pay for tuition and other university expenses, are set to be cut by 11 percent as California continues to battle budgetary issues, according to the Los Angeles Times. Such budget cuts made at the expense of students’ education are yet another reminder that the era of draconian cuts and politicization of education needs to end. The cuts in education funding offer a disturbing image of the current narrative facing not only California, but the entire country. When faced with budgetary and economic woes, education is the first expense to be cut. In 2011, the maximum award was $9,708. Currently it is $9,054. With the additional cuts, the maximum award will total $8,056, the lowest in 16 years. The benefits of making small cuts in funds that aid students attending college are very narrow for the state, but the impact on students is almost immeasurable. With today’s astronomical costs of education, it is increasingly important for students to find money wherever they can. Investing in students and education is an investment in the future. Cutting aid puts the burden on students to find funding elsewhere or drop out of school completely.

Budgetary issues in California are as old as the state itself. When faced with a deficit, cuts are made to balance the budget. Rarely, however, are they made fairly and across the board. Sacred cows such as Social Security, Medi-Cal and Medicare are almost never touched, whereas education is usually the first on the chopping block.

Though Cal Grants have been cut over the past three years , newly instated University of California President Janet Napolitano was given a generous six-figure salary totaling $570,000, plus $8,916 and $9,950 bonuses for car and mortgage payments, respectively. The UC system, funded by the state, even remodeled and renovated a home for the former Secretary of Homeland Security costing between $3.5 and $6 million, all under the guise of reducing maintenance costs in the future. An initial $620,000 was approved to begin the renovations. Napolitano was also given $142,500 for relocation costs.

The California legislature  also condemns that the coffers are nearly empty, and the current funding for higher education is unsustainable. The UC system in the past decade has struggled to keep classes open and provide students with reduced tuition and sufficient financial aid. Private institutions, such as USC, have launched optimistic and record-breaking fundraisers in order to stay afloat and provide an infrastructure for students and faculty that will endure in the 21st century. Higher education is suffering; meanwhile, the UC system is spoiling its new president, who was brought in to lead one of the largest systems of higher education in the country in the right direction. To add insult to injury, Gov. Jerry Brown was approved for a salary raise last summer, increasing his pay to $173,987 per year.

The bureaucracy in California has hindered the development and progress of universities and in lieu of slashing pay and benefits for themselves, lawmakers and those in power have shifted the burden to students and parents. With Napolitano making six figures, the $8,916 per month bonus she receives for car payments nearly totals more than the maximum award for Cal Grants next year. That money could be used to invest in a student’s education.

With the current trajectory of California’s budget for higher education, the future looks bleak at best. The issue is systemic as well. The Common Core, a curriculum instituted across much of the United States that standardizes K-12 education, is harshly criticized for its lack of depth and rigor. The newly announced SAT has made the essay optional and has simplified its vocabulary. Not only are students receiving an underfunded education, but if they reach the next level in college, they are faced with staying afloat both academically and financially.

California needs to invest in higher education and eliminate the bureaucracy in favor of giving the students of today an opportunity to succeed in the future. Maybe in the next round of budget negotiations, the legislature will agree to turn Napolitano’s vacation expenses into scholarships and grants for university students trying to get an education.

Athanasius Georgy is a freshman majoring in biological sciences.

The National Mistaken for Strangers
Scroll to top