Teach for America must work on shortfalls 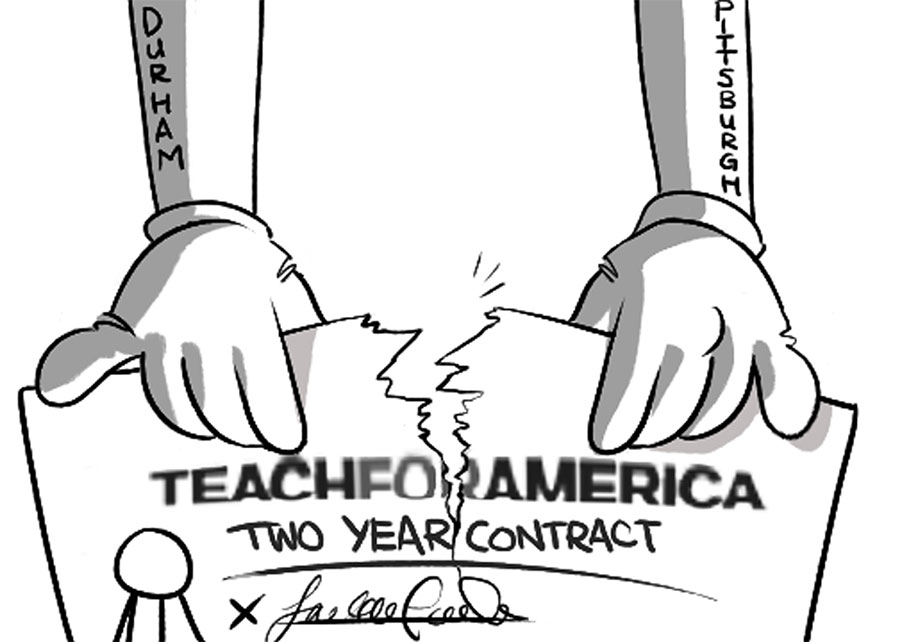 Earlier this month, the school board in Durham, North Carolina voted to end its relationship with Teach for America in 2016, once the most recent teachers from the program complete their two-year contracts. In April of this year, Pittsburgh became the first district to terminate an active contract with TFA. Though the reasons both systems cited for parting ways with the teaching corps are nothing new to the discourse surrounding education reform, they are nevertheless valid and important exercises in dissent. TFA is a teaching corps that recruits college students from institutions throughout the country and places them in positions with underserved school districts after they graduate. More than 5,000 recent graduates began their two-year commitment this fall, becoming part of the nearly 11,000 that make up the program across 35 states and D.C. The program is highly competitive and recruits come from every Ivy League school as well as  many large state universities. More than 465 USC alumni have taught as corps members in the TFA’s 24-year history. With 70 students joining last year’s corps, USC was ranked the second-largest contributor to TFA. Forty-two USC graduates joined the 2014 corps.

Corps members don’t have to study education prior to applying to the corps. In fact, most corps members have not. The summer prior to their first year, all recruits are required to attend a rigorous five-week training session to acquire basic teaching certifications.

This training method is one of the qualms that critics of TFA, including the Durham school district, often cite. They argue that experienced and highly trained teachers would provide more benefit to underserved districts and that five weeks cannot possibly prepare anyone to jump into the teaching profession, especially not in circumstances under which TFA teachers are often placed.

Another reason the Durham school board cited for breaking ties with TFA is the two-year turnover, which can be detrimental to already underserved districts that have a difficult time retaining instructors to begin with. The poor turnover also hurts students who need stability.

When Pittsburgh decided to terminate an active TFA contract this past December, another reason brought up seemed to be the close relationship TFA has with a large number of charter schools and the privatization movement in education reform. In Los Angeles County, for example, 90 percent of TFA participants are placed in charter schools. As one Al Jazeera article put it, this results in “pulling resources out of neighborhood schools and abandoning the kids most in need of quality public instruction.”

Furthermore, the flow of profit from charter schools can be easily traced from public officials to corporate supporters. Two firms in Ohio known to regularly contribute to elected officials run 9 percent of the state’s charter schools but received 38 percent of the state’s increase in charter funding last year. The number of charter schools in the United States has more than doubled in the past decade, despite the fact that a recent Stanford University study showed that charter students might not actually test better than public school students, and in some cases even do worse.

TFA’s contribution to this movement is a detriment to the advancement of public schools and, more importantly, public school teachers. Not to mention, school districts are often bound by contract to continue hiring a certain number of TFA teachers, while career teachers and union members face the harsh reality of budget cuts, layoffs and furloughs.

Overall, the deficiencies cited by the Durham school district are structural issues that can be changed with pressure from outside forces — issues with training and contract timing could be resolved with comprehensive changes. The actions of both school districts that have decided to drop TFA contracts are examples of such pressure that demonstrate the important role of democratic school boards. This expression of dissent is not only healthy, but vital to the progress and improvement of education reform.

Ultimately, anything that gets young people as enthusiastic about being involved in the education of younger generations as TFA does has potential that should be tapped. TFA has created a space for progress, but it’s up to future reformers and critics to create new ideas to put into this space. In other words, either amend TFA to mean less corporate charter ties and more empowerment for public school systems, or create a new system altogether.