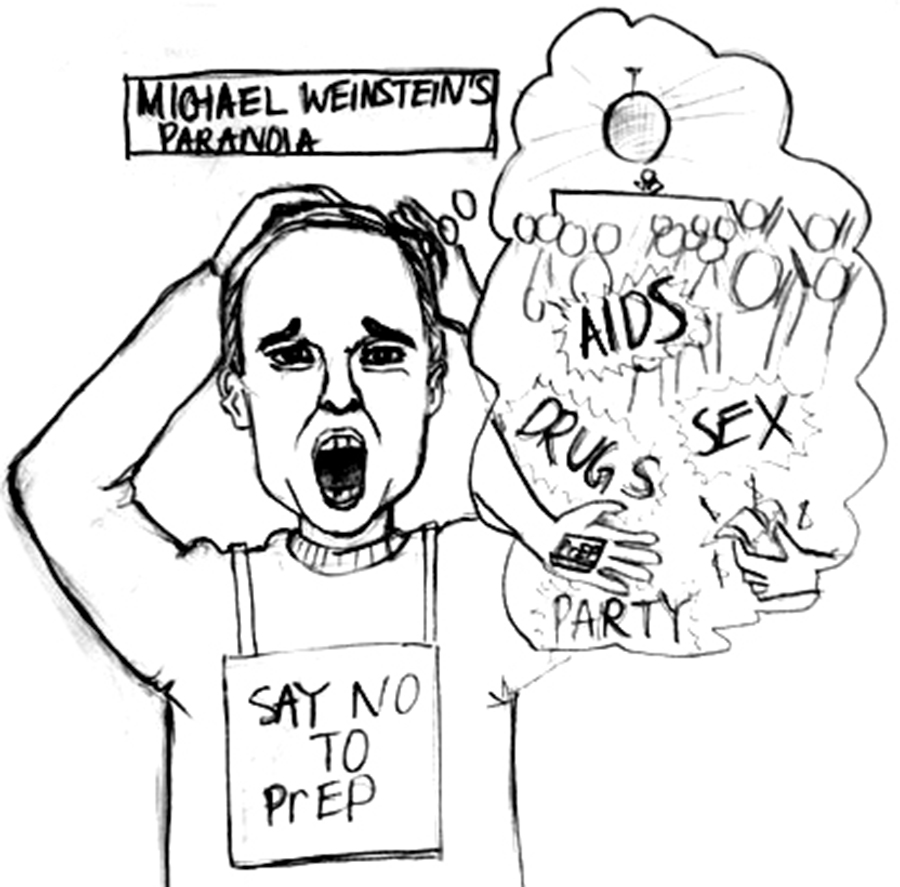 In  the ongoing battle against HIV, the media still labels the drug Truvada as controversial. Approved by the Food and Drug Administration in 2012 for pre-exposure prophylaxis, or PrEP, against HIV infection, the pill has been shown to work effectively, but some  continue to stir up unnecessary and dangerous skepticism about the drug. The main culprit is Michael Weinstein, the president of the Los Angeles-based AIDS Healthcare Foundation. Starting this week, according to the The New York Times, Weinstein’s foundation will be putting out negative advertisements in gay-oriented newspapers around the nation. The ads are headlined, “What if you’re wrong about PrEP?” with the caveat that “the [Center for Disease Control’s] ill-advised strategy of mass treatment with Truvada poses a significant risk to the condom culture, which while it has eroded, has still prevailed among gay men for three decades.”

As Weinstein was quoted by USA Today in April, “If something comes along that’s better than condoms, I’m all for it, but Truvada is not that.” He added, “Let’s be honest: It’s a party drug.” While Weinstein doesn’t deny that Truvada can curb HIV transmission, what he objects to is an upsurge in PrEP use. The CDC now recommends PrEP for up to 500,000 Americans at risk of contracting HIV, which is a steep increase from the thousands of Americans on PrEP prescriptions presently, according to The New York Times.

Weinstein and the AHF argue that this kind of widespread PrEP use could be a poor decision because adherence to taking the drug has been low in clinical trials. When people don’t take it as often as they should, they become more vulnerable to infection, and there’s a possibility that the reliance on the drug as a prevention safeguard might discourage condom use and lead to higher HIV infection rates. This attitude could be a concern. As actor Zachary Quinto wrote in the Huffington Post last week, he’s “heard too many stories of young people taking PrEP as an insurance policy against their tendency toward unprotected non-monogamous sex.”

Though skepticism is healthy at times, a look at the benefits of PrEP through Truvada seems to clearly point at the drug’s ability to outweigh the risks cited. People might not take the pills or use condoms as often, but the efficacy of the drug will still help fight the contraction of HIV/AIDS. Weinstein’s concerns over the damage Truvada will inflict on the condom culture is unfounded because if that culture could actually stop the epidemic, it would have by now at least curbed a lot of infection cases. According to the CDC’s 2010 HIV  Surveillance Report, the number of diagnosed cases for HIV has remained stable from 2007 through 2010 in the United States, but that, more alarmingly, the numbers and rates continue to increase in subpopulations.

Since the first appearance of AIDS in the United States around 1969, the battle to stop the viral epidemic has been immense. Through trial and error, different treatments have been enacted, one of which involves azidothymidine (AZT), a drug marketed under the brand name Retrovir. The first U.S. government-approved treatment for HIV, AZT slows disease progression within the body by inhibiting with an enzyme called reverse transcriptase that helps HIV synthesize DNA for propagation. Prevention, though, is just as crucial. Casting doubts on whether or not people should use a drug that has so much potential to do good is dangerous because if those opinions spread and more people buy into the belief that Truvada is, as Weinstein has said, “a public health disaster in the making,” the risk of more people contracting HIV only gets higher. Such a mistake could limit the chances we have of eradicating the disease.

Not to mention how much data there is out there that shows Truvada’s revolutionary benefits. According to Science Translational Medicine, “intermittent prophylactic treatment with long-acting antiviral drugs would be as effective as daily dosing in blocking the earliest stages of viral replication and preventing mucosal transmission.” According to AIDS.gov, studies found that for those who took Truvada consistently, the risk of HIV infection was up to 92 percent lower compared to the control group.

With these results, it is necessary for people, especially those in powerful positions such as Quinto or Weinstein, to understand the overall positive effects that drugs like Truvada can have on society. Otherwise, their ignorance could lead to fatal decisions on the parts of those needing to take the drug. Outspoken activists like Weinstein should understand that activists for Truvada have never said anything about lowering HIV prevention methods, so to assume that will always be the case is wrong.